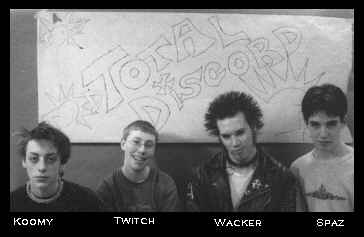 Out of the wreckage of a bad year of 1997, Jeff "The Wacker" Eis wanted to let others know about his feelings towards our hostile environment. He and Paul Wachsmuth started what came to be known now as Total Discord, a punk band with varying sounds from mellow to fast-paced. Total Discord is not just any punk band. Why should they all sound alike? Punk would just get boring, then. They went through many members like Jeremy, Chad, and Jordan. Then Zach "koomy" Kummerow came in on drums. After Paul left, Jeff was the only remaining origional member, and the leader of the band. Total Discord produced mellow sounds such as Citizen Blood, which was about the Columbine shooting, and Red Shadow Lovers, a song about bad relationships. They also produced more upbeat sounds such as Corrupted Souls and Roll the Dice.  Total Discord struggled through the years to get this far, and are determined to never give up.

"Our sound will live on through the minds of young punks in Wisconsin," Jeff said as he lit a cigarette.(taken from an interview in 2000)