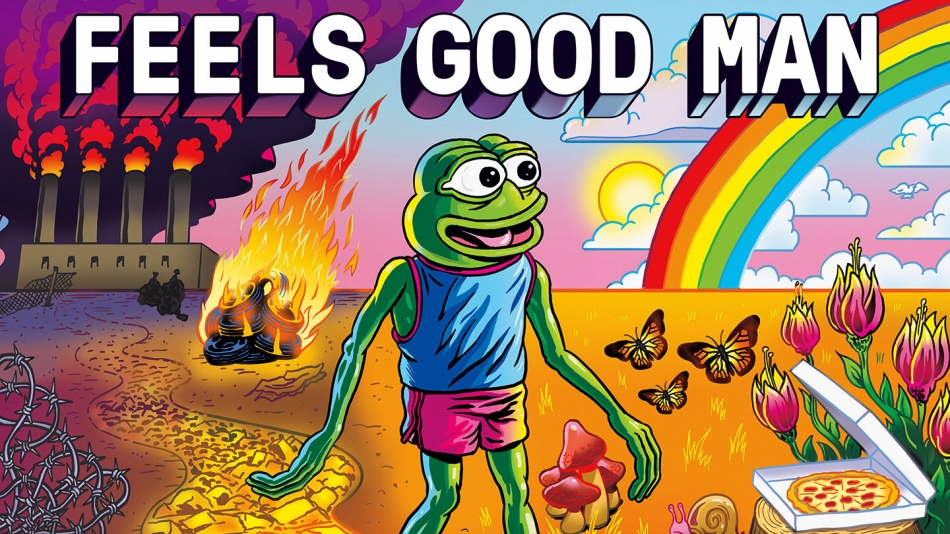 Unlike most of our waking life outside of screens, it’s easy and convenient enough to hide behind an anonymous persona onscreen. Taken from a catchphrase dialogue bubble from animator Matt Furie’s comic book series, Boy’s Club, Arthur Jones and Giorgio Angelini’s documentary Feels Good Man captures the trajectory in which a frog named Pepe transitioned from a simple animated creation to becoming an icon of white supremacy and nihilistic notions from the alt-right. Through interviews and arresting animation sequences from a small in house animation studio and crew, Jones and Angelini explore the perverse reality we currently find ourselves living in as well as how conformity on the internet has seeped into non-virtual spaces in their compelling and insightful documentary.

Delving into the early 2000’s after the popularization and widespread activity of chat rooms and forums on virtual avenues, websites like 4chan’s persistent and rapid Darwinian one-upping posting strategies amassed us into a social climate that was conducive to not only creating a culture of meme-sharing, but also emphasized the ability to shame us of our potential to be genuine and empathize with others. The memes that spiraled on 4chan and other like-minded sites, although coming from a humorous angle, were coated with irony, inevitably becoming symbols for online misogyny, racism and general hatred towards others from a community of vastly white middle class males who felt alienated from society at large and what they deemed as “normies”. With their appropriation of a cartoon frog leading to Trump re-tweeting Pepe on his Twitter account circa the 2016 election, it signified and encouraged other conservative figures to further foster bigotry and trolling tactics. “Memes almost have the net effect of democratizing politics in the way that it really inverts for the first time in human history the relationship between the electorate and the politician”, says Angelini. “One person sitting behind a computer can create a political meme, have it go viral, and then feel like they’re part of the political apparatus and not just this pawn in a much bigger system that they can’t really control. In some sense it gives people some agency, but of course the flip side of that is when you have a demagogue who understands that potential and then encourages it in really toxic ways.”

The documentary also sheds light on the media’s use of sensationalism and the constant stream of news that we always have access to in our pockets or with a simple click of a button. “We’re in this moment in the first time in human history where we’re being bombarded with a level of information and engagement that I’m not sure our brains are used to handling”, stresses Angelini. Instead of our default engagement being to read an article in its entirety and consciously reflect on what we read before sharing the link via a Facebook post or retweet, our automatic response is often reactionary, leaping to conclusions and having a video or snippet of news go viral before we’re on to the next exaggerated and appalling headline. Memes also contain a large element of emotional information and an automatic response before we are fully aware of how those responses came to be in the first place. “It almost becomes this Pavlovian machine for propagandizing people, which makes it very hard to de-program people”, considers Angelini on the implicit nature of memes and representations in a massive group setting. On one level, Feels Good Man can be taken as an independent artist’s fight to win back his creation from those that devolved Pepe into a spiteful symbol, but on the other it’s a deep reflection on media literacy and the ways we should conduct ourselves and interact with others online. Angelini states the importance of marking a clear distinction between our digital and real life selves going forward. “In terms of a solution, if social media is going to be a part of our lives, I think we need to learn to build new walls again and separate our [online and offline] selves, because it’s clearly not healthy for our personal constitutions or for our democracy.”

You can tune in tonight to watch Feels Good Man on PBS at 9PM CT or view the documentary on your preferred streaming channel here.