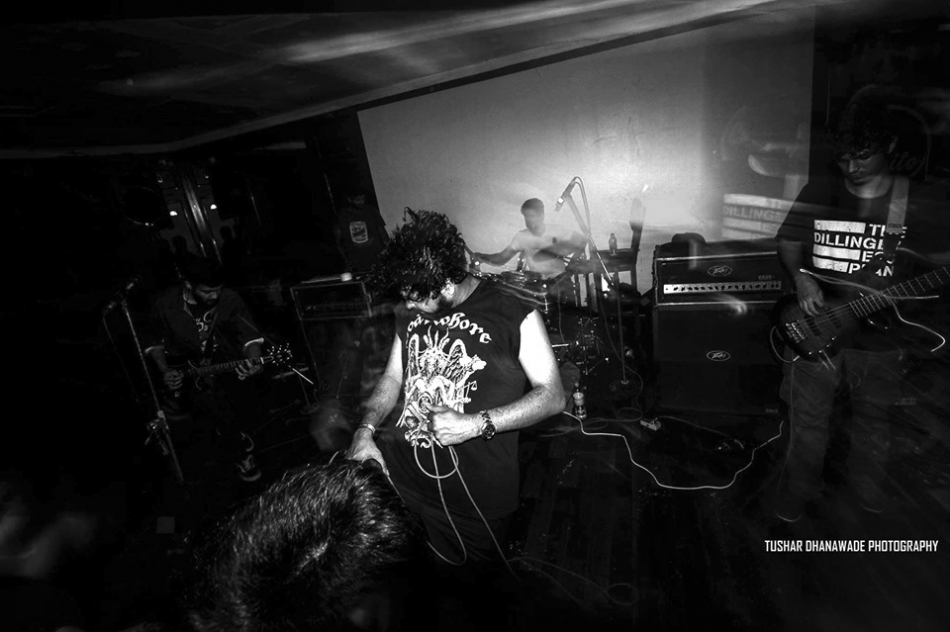 Interview with Death By Fungi, a hardcore punk band out of India.

Death By Fungi, a hardcore punk band starting a fever in India, has issued a few EPs and a split since forming in 2013. Those recordings document a loud, talented band finding a sound. The sound started as melodic hardcore before the musicians dug more into skatepunk and mathcore influences. On the band's new EP, "Die In Bombay," the sonic identity is unfolding in a satisfying rush of chaos, rhythmic impatience, abrasion, and, at brief moments, melody. This production captures a sound the band wants to pursue. If those earlier recordings were musical ideas scribbled on scraps of paper, "Die In Bombay" may be the band's outline—if not a complete first draft.

Death By Fungi fits musically somewhere between Botch, Coalesce, and Deadguy. The lyrics on this EP dwell on personal suffering as well as, in the case of the title track, a particular suffering lived by Bombay populations whose lives are marred by violence, pollution, and class and religious divides.

The band members are Vrishank Menon on guitar, Aryaman Chatterji on drums, Kamran Raza on bass, and Tabish Khidir on vocals. Vrishank took some time out during touring to answer a few questions from RebelNoise.

What inspired the name "Death By Fungi"?

I think our old drummer came up with it. We don't really know what it means or why we stuck with it. It's just a weird name, and we felt it was a good contrast between what we were doing and the wannabe-serious shit that metal bands were doing.

How do you fit into India's hardcore scene? In what ways are you different from other bands?

If you were to compare us to our hardcore contemporaries, False Flag, Pacifist, and the Riot Peddlers, they all take after a certain hardcore subgenre. For example, the Riot Peddlers play old-school crossover thrash, while Pacifist play post-hardcore. We play more 90s metalcore/mathrock with post-hardcore and skatepunk influences. I grew up on skatepunk, so we tend to write super-fast songs.

What non-musical works or forms of art and media influence the music you make?

Off the top of my head, I love anarchist propaganda from the Spanish Civil War. Other than that, I don't really know too much revolutionary art coming out of my surroundings in India ha.

Your songs tend to evolve quickly, switching between driving riffs and dissonant, spacious chords. The tempo changes frequently, too. What is your songwriting process? Do you write independently and bring your ideas to the other band members? Or do you write together?

Your promotion material describes Bombay as a culture divided by class and religion. How do the divides influence your music? 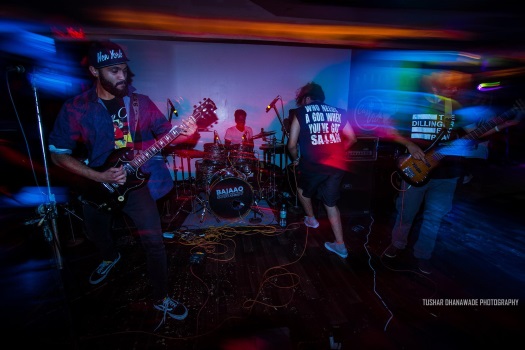 There's a generation of Bombay people who come from that culture divide but see past it. I like to think we're from that background since, in our band, we have people from different cultures and communities, all of whom find community in punk rock and extreme music. Death By Fungi's members all come from different religious backgrounds (Islam, Hinduism, Sikhism) and varying levels of privilege. But we find common ground in being Bombay folk and in observing class and cultural divides as meaningless bullshit that the "powers that be" impose on the people to keep the working people enslaved. We see all of this as the work of large businesses trying to maximize their profit with cheap labor and politicians maximizing vote banks by drawing lines between people. The anger that comes of all of this makes its way into our music.

The fourth song, "Attrition," sounds noticeably different from the other three songs on your 2019 EP. The first two-thirds of "Attrition" sound more upbeat and melodic even while the lyrics remain full of regret and pain. Do you agree? What is the story behind the song's music and lyrics?

An older version of that song was first released on our debut EP, and it was written on a demo idea I had from 2011. So it's more skatepunk in its sound, and the lyrics are a little more personal because they were written in my teenage years. It was the first time I was opening up about trauma I'd experienced in my childhood. Recording those vocals was super painful because the guy recording us kept laughing and calling the lyrics "emo." On top of that, it was my first time recording vocals, so I was already shaken.

What attributes do all great hardcore bands have in common?

Being forward thinking and not being affected by the sound of the scene in ways that stagnate. Being honest.

What makes you feel good?