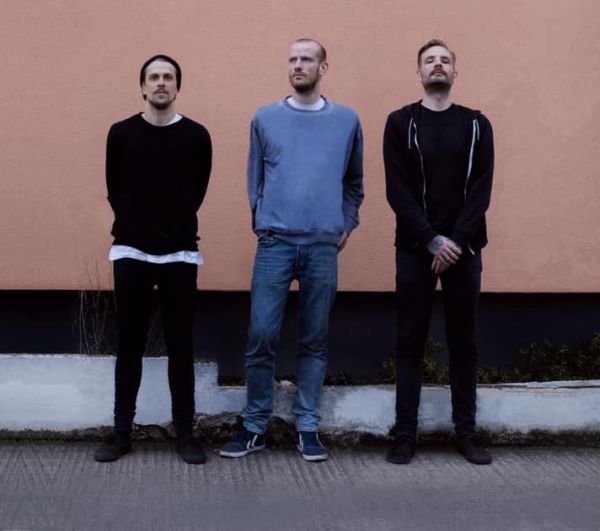 Berlin-based noise rock band Colored Moth get real about humanity and Earth in a potent interview.

Berlin-based noise rock/post-hardcore band Colored Moth formed in 2013. Their debut full-length, Fragmenting Tensions, was released in 2016 and last fall saw the issuance of their second powerful LP, DIM via Wolves and Vibrancy Records.

Raw, passionate, and fiery, DIM showcases Colored Moth in their noisy and experimental element. Band members Nils, Sandor, and Chris kindly took part in our ongoing Protest Interview series, highlighting what we need to do to at least begin saving the planet we live on.

We first met at the end of 2013 and are inspired by a variety of topics that catch our attention and excite creativity. We operate in a genre that we refer to as “ambient noise – hardcore.” Our roots are in ‘80s hardcore (Black Flag, Minor Threat), post-hardcore (Fugazi, Frodus, Sleepy Time Trio, Botch), and grunge (Nirvana, Sonic Youth), but also the 2000s have left their mark (TAAS, Russian Circles, METZ). Apart from that, hip hop, broken beats, techno, IDM, film art, literature, science, and science fiction influences our work as well, because processes for songwriting are not only on a musical level.

There are so many things going on around us that annoy us or make us feel like we need to open our mouths more than in the past few years. We more and more get involved in discussions about life-drafts, political and humanistic attitudes, and questions about the future.

Internationally, our world is dominated by dangerous people who speak of economic growth and do not act in the sense of a world community that wants to live on this planet for many more years. Rainforests are burning, goals to limit global warming are at stake, almost one billion people are starving, wars are being waged at the expense of the poorest, and religion and nationalism are exploited as if we had learned nothing from the past.

Everything around us is getting madder and we see art, be it musically, lyrics, or in visual form, as a strong and necessary means to bring important, topical political issues to the people.

We could mention a few here; for instance “DEL,” “Indefinite Hiatus,” “The Social Darwinist Programm,” or even “H. useless” (We have added our thoughts and explanations to the songs on Bandcamp by the way), but let us take the song “Whataboutism.” “Whataboutism” as a viewpoint. The times we live in are confusing and almost everything seems somehow not really tangible and whataboutism is a very dangerous tool which is used right now in populism.

Sandor: “You don’t need a weatherman to know from where the wind blows“ - Bob Dylan: (1965), “Sag alles ab. Geh einfach weg. Halt die Maschine an und frag nicht nach dem Zweck.” - Tocotronic: (2007), “Because of their own blind involvement / in their own conditioned minds / the unit bonded together / Morals, ideals, awareness, progress / Let yourself be heard!” – Minutemen (1984), and “Some say the end is near / Some say we'll see Armageddon soon / I certainly hope we will / I sure could use a vacation / from this bullshit three-ring circus sideshow of freaks.” – Tool (1996)

Chris: “Your world has taught me nothing.” - Bikini Kill (1991), “The machines never died / The recurring threat of technology can be used to confine populations / It’s not a reason to reject it all / Just the minds who abuse the knowledge” - Frodus (2001), and “This time will be seen by history / as one that suffered such inequity / that denied us both life and liberty / so grotesque in its abject inhumanity.” - Off Minor (2004)

In our environment, we are surrounded by many people who are politically involved in many different ways and let us participate. There are the people who demonstrate on the streets on many marches or public actions on issues such as gentrification, sexism, or the question of refugees, or those who organize themselves in collectives to raise money for a good purpose through events. Especially in Berlin, we have a very bright community, politically engaged in various forms.

Every single one of us has to change their own standard of living in order to make a difference on a large scale. Of course, it is a simple and effective way to donate to Sea Watch or other aid agencies, or be aware and bring money where it is needed, such as in Yemen, where one of the biggest humanitarian catastrophes of our time is still happening.

But you also have to rethink and reform your habits in your own little world; in your household. What do you eat? How much water do you use? Should you travel by trains and bicycle instead of drive cars? Does using second-hand stuff suffice, instead of constantly buying something new? When a large number of people implement these concepts, things can change in the world as well, as it will better reach the people who are at the bottom of the hierarchy.

The youth who are currently dealing with future issues much more constructively than the 40+ generation. If only enough of these young people do not lose their power to engage themselves politically, there can always be some positive action in a long-term. Otherwise we have to be realistic: Humankind has lost their existence on earth. It’s more or less a question of time.