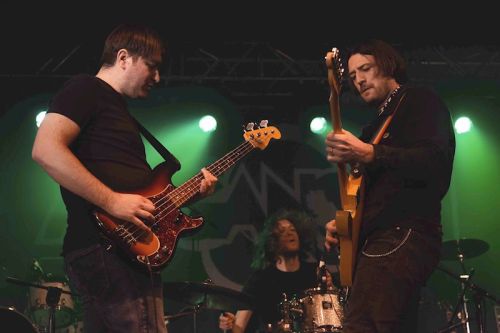 Italian indie rock band Elizabeth The Second decry the unstable state of the world and describe their new album.

Sonically gritty and lyrically relevant Italian indie/power rock band Elizabeth The Second will unload their debut album, Two Margaritas at the Fifty Five, on November 9th. Their opening salvo, “No One Cares” is a raw and resonant track that captures the bleak feeling that has taken hold in the public mindset; the feeling that we’re drowning in an unsparing and uncaring socio-political mire.

Elizabeth The Second is comprised of Ben Moro (guitar, vocals), Michele Venturini (bass), and Luca Gallato (drums). Fans of renowned acts such as The Clash, The Libertines, and The Strokes will prick up their ears at the rough and rousing compositions on Two Margaritas at the Fifty Five.

Ahead of the album’s release and a gig at The Unicorn in London on November 9th (https://www.facebook.com/events/2456377017739293/), Ben Moro has kindly taken part in our ongoing Protest Interview series.

Hello! I’m Ben from Elizabeth The Second. We are three friends from Padua (northern Italy) who want to do some rock 'n roll. We are children of the nineties and we have always dreamed of being a power trio.

Our musical vision is varied given that we listen to many genres, even if we prefer the alternative part of rock, up to the most extreme experimentation. Having said this, we [are guided by] what comes from within, without making us too scrupulous about the result and we think that’s the true form of art and expression.

Personally, I am quite worried about this historical period. I believe that the Western world is going through a major identity crisis. Nationalism and populism are the order of the day, and the stress of people in general has increased dramatically, somewhat due to the economic crisis of the last decade that brought the poor population to further impoverishment and enriching the rich part (always smaller over the years).

In our specific case in Italy, we are going through a bad period due to important migratory flows from other countries that have destabilized public opinion. There is a return to fascist thinking, without remembering what it has caused in the past, and as an Italian I am ashamed because I know what price we paid and that we are still paying for it after the Second World War. All this is fueled by general misinformation, manifested very badly on social media. All this is absurd. I don't want this world for my children.

I think “No One Cares” is the right song. It speaks a little about the fact that today the general perception is that nobody gives a damn about you. How is it possible that nowadays there are such absurd situations in the world? It will be 2020 soon and we have on one side, countries that live in the finest luxury, and on the other, starving people. I can't believe it.

I believe that basically we need to love each other more, to throw prejudices down in the drain, and love ourselves more. What better song to express the concept than “Danny Nedelko” by IDLES :

I believe the best form of protest is in the behavior of everyday life. We can go to [marches and] world events on human rights, but if we do not behave in a consistent way every day, giving an example of what we believe in, it is useless. Helping others, having respect, sharing joys and sorrows with loved ones, teaching these values ​​to our children. This is the greatest protest, to raise the new generation with values ​​that are opposed to hatred towards the different or the weakest.

I don't know... There are a lot of actions that could be taken for the good of the community. I believe that one of the most important things in the world is education, especially the one that concerns the generations that will come, and in particular the third world countries. Lack of education is a powerful weapon used in history for population control; only with education and awareness can we truly live in a better world.

Anyway, if you want to help the poorest countries, it is better to give preference to smaller organizations, whose authenticity you can verify.

When I look at my children, into their eyes, and I see what we humans are really made of. For the rest, history teaches us that war never changes, ever since the appearance of man on earth.