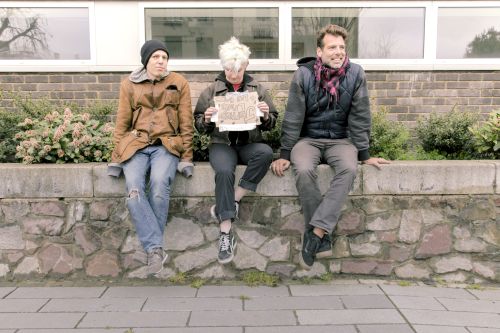 NYC-based anti-folk singer-songwriter Jeffrey Lewis gets realistic about the state of the nation.

Native New Yorker and urban folk/indie rock singer-songwriter (and author, and visual artist…) Jeffrey Lewis is in the middle of an extensive touring circuit (which he’s done world-wide since 2002) that hits a multitude of venues in the U.S., the U.K., and Europe. He's currently on tour this month with his band Los Bolts (Brent Cole of Moldy Peaches on drums and Mem Pahl of Cat Tatt on bass and keyboards), and on his next tour in September they'll head back out on the road as Jeffrey Lewis and The Voltage.

Despite his busy schedule, Lewis took the time to reply to our Protest Interview and deliver his pragmatic viewpoint about the current (and historical) state of the States.

I’m Jeffrey Lewis, life-long New York City resident. I make comic books and I make songs. The songs are often very lyrically-oriented, I’m mostly known as a lyricist, but the music covers a pretty wide range from quiet acoustic finger-picked stuff to loud full-band guitar-distortion excursions and stuff like that. The musical range of bands like Yo La Tengo or the Grateful Dead has always been inspirational to me, but the power of a song is, for me, in the lyrics. I want words that punch further “in” combined with sounds that strike further “out”…

I want to be a great solo artist and a great band, all in one. My ideal would be to combine Jonathan Richman with the Modern Lovers, or to combine Lou Reed with the Velvet Underground.  It sounds obvious when you say it like that, but nobody has ever done it. Even Lou and Jonathan never did it.

The political situation in the USA just ticks and tocks back and forth, with regularity, so I’m not in fear of things going right-wing and staying there.

Catastrophic climate change, in tandem with world overpopulation, is the scariest thing.  Outrageously perverse and selfish pigs in political office is pretty bad, but it’s nothing new, just another asshole in a long line of historical assholes. The political situation in the USA just ticks and tocks back and forth, with regularity, so I’m not in fear of things going right-wing and staying there.  It always goes back and forth, from one administration to the next, just look at the past 100 years of presidential administrations, and it’s a very regular pattern.

My best three current political songs are yet-to-be-released, that’s “True Tax Forms” about Trump’s hidden financial situations, “The Cat Grabbed Back”, about the Women’s March of 2017, and “2nd Amendment” (self-explanatory). Best political song of that you can find online is “WWPRD”.

I think Devendra Banhardt’s song “Heard Somebody Say” is quite beautiful and moving:

And of course there are the classics, like my all-time favorite Woody Guthrie song:

…And like so many of my favorite incredible Phil Ochs songs:

I write and draw what I call “low budget films”, in crayon on large sheets of paper.  It’s an art-form that I’ve essentially pioneered, I don’t see anybody else doing this sort of thing. Some of these that I’ve made are just silly fantasy stories for fun, but many of them have been political or historical. Here are some good examples:

The life of Sitting Bull:

The history of Communism part 6 - Cuba:

I don’t have a specific cause, just vote Democratic and do volunteer work to get out the vote in important swing-areas when each election approaches.

Humans are able to fuck things up colossally, but we’ve also been able to make great progress, and it does seem that what is “for the best” does actually make sense to most people, eventually.

See Jeffrey Lewis and his band on tour in August in these cities (with a Europe/U.K. tour to follow in September):