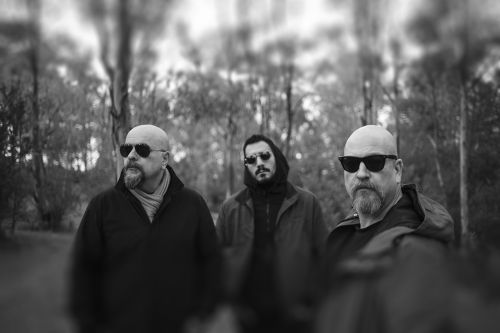 Greek/American synth-punk/industrial outfit Mechanimal discuss the state of Greece and America in a hard-hitting interview.

Giannis Papaioannou and Freddie Faulkenberry get down to brass tacks on their LP – and on this installment of the Protest Interview series. Check out their bold and compelling video for “Scavengers” below:

GP: Hello, I’m Giannis. I was born in a little town by the Αegean [in Greece], but I grew up in Athens, where I still live and work. I’m a dad, a musician, DJ at times, a journalist, a devoted music lover, and an amateur photographer.

What are the main personal, national, and/or international issues concerning you the most these days?

GP: We’re living in a small country where more than a million people are on the dole, the prices are soaring while the wages are frozen, the new right-wing government is looking for any left socialists to blame while some loony fascists are cashing in by promoting hate. I’m aware that this happens almost everywhere in the Western world, but in a small country like Greece, the so-called “birthplace of Democracy”, I firmly believe things should be different.

For the last 15 years, the rising problem of refugees arriving in Greece, the most important point of entry into Europe, adds one more, sadder, picture on the plight. It is unbearable to even think the pain, the suffering, and the ills of these “naked lives” trying to cross the Mediterranean. That’s the only real picture. Then, politics on that matter is another thing. And it involves political and social alliances, pressures, publicity, tangible mobilization, impact speech, long-term true commitment to people.

Today’s state racism is not invincible. Because it’s not a real answer to any “refugee crisis;” it’s just presented as a false problem giving birth to domestic fascism. But, on the other hand, between 2015 - 2016 about five million people (almost half the Greek population) participated in solidarity with refugees in Greece. So, not all hope is lost, yet.

FF: I'm American and gun control is quite a big issue for me. I'm from the South, I'm American, and I've grown up with guns and rather love them, but the situation is completely out of hand and it's necessary that this madness stop and Americans realize that we cannot continue looking the other way and claiming that guns are for our personal protection, since the past 50 years we've abused that privilege and guns need to stay away from all households. It would be great that guns just completely disappear from the face of the planet, but that's something that's utopian and unreal. This is a matter which we tackle in the track “Vanquish.”

Another matter is climate change, something I'm sure concerns everyone and if it doesn't, it should.

I think Americans owe an apology to the world for the buffoon we have as president; our external politics have always been shady, but this is a travesty.

GP: I wrote “Low Land” originally for my ION project. That was back in 2011 and it was a dark techno song about all the oppression that was coming from the state and arms of the state. Greece was quickly sinking in a deep crisis situation so I asked my friend Freddie, an American living in Athens, to do the vocal part for the tune; like a stranger living in Athens, observing what was going on. That’s how Mechanimal started. It was like a new dimension of that struggle and part of the fightback against what we were experiencing. We agitated. Then we had riots. And then we wrote songs. “Low Land” was re-recorded for our first Mechanimal album. And it was all part of the same struggle.

FF: “If they bear guns, we'll bear their bones / If they close schools, We’ll crush their skulls” – “Vanquish.”

GP: “Soft” and “hard” racism is a white construct. And punk showed the world that’s just bullshit. It’s just racism. “Power in the Darkness” is a song I will always love from that punk era. The sad thing is that this song is just as relevant today as it was 40 years ago when I was 14.

FF: “I’ma pull up in that bullet coupe spaceship.”

GP: Honestly, I don’t demonstrate as much as I did in my youth. I have donated to several Greek charitable nonprofit organizations or Greenpeace and WWF in the past. I still support The Ark of the World, a Greek nonprofit providing special care and protection to young unprotected mothers and children.

It’s easy to judge and criticize others, especially in these unsettling times of overt intolerance, ignorance, and insults, but the fact remains that we need to work together on a solution to the problem to ensure that positive change occurs. Name an action to take, or a campaign/charity that would be worthwhile to contribute to, for your cause.

GP: I try to live a life with deep respect for nature and all life in it. And I like Extinction Rebellion telling the truth about the state of the climate and environment, but I believe that by claiming to be “beyond politics” XR is undermining its own cause.

FF: Any animal rights campaigns I'm all for. Extinction Rebellion is definitely something headed in the right direction. I'm a sucker for any local animal shelter and of course, I'm into art bringing beauty and change, in a subtle way though. I'm not too into art when it's strictly political; that's for journalists and newspapers, not for artists. That being said, things are so fucked up that it would be irresponsible for artists to sit back and watch without doing something.

GP: People. When you live in a city where historically everything is so politically and economically tumultuous it can be very hard to remember why art is important. Music, or painting, or photography, or anything you create. As the Greek right-wing government is carrying on with pronounced authoritarian tendencies and extreme police brutality, or with divisive and polarizing policies, we can always kid ourselves and just say our work is important. Whether it is or not, it has to be to us. It has to be as real as possible to us. Real as the immigrants starving in refugee camps or real as the youth unemployment that scores a staggering 40 percent.

So, music has to be real and give us hope. If that’s real to us, then in some way it’s out there as a little piece of reality in the face of all terrible things happening around us. And if you stay true to yourself, and true to your music, it’s got to mean something. Even if it may not mean enough. But in this battlefield of little victories and big defeats, what remains at the end is us, people. And we are the ones that need to take the risk and take care of each other.

The easiest way to get our goods is through Bandcamp:

Through Spotify you can stream all our music:

You can find more about us through FB or check our collages and artwork on Instagram: