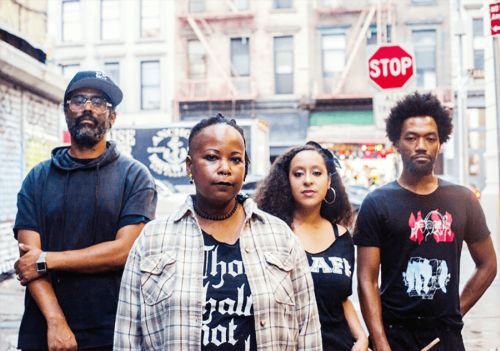 New York City arguably is host to the most diverse and daring array of musicians on the planet. Since 2017 the blues-punk/rock collective The 1865 has joined the crowd with their socio-historically raw and relevant music. The band’s debut album, the fiery and urgent Don’t Tread On We!, released last year via Mass Appeal.

The 1865 was formed by musician (lead guitar) and filmmaker Sacha Jenkins (The White Mandingos, The Wilding Incident), who also directed the new Wu-Tang Clan documentary series Of Mics And Men that was released via Showtime in May last year.

Sacha Jenkins and Honeychild Coleman have graciously taken the time to express their views for our continuing The Protest Interview series, displaying their passion and drive, not only for their music, but for the issues that matter if humanity is to survive.

SJ: Hi. My name is Sacha Jenkins. I’m from Queens, New York. My dad came up in Philadelphia. My mom came up in Haiti. I play guitar in a band called The 1865. I’m also a husband, a dad, and a son. I make movies —that’s my day job.

HC: Hello! My name is Honeychild Coleman. I'm from an area called Okolona in Louisville, KY. My dad is from Russellville. My mom from up North in Eminence. I sing and play baritone guitar in The 1865. I'm also an activist, visual artist, and DJ.

SJ: The environment is the biggest issue we face as humans. Climate change is real. Trump thinks that climate change is fake news but he’s a fake president with fake policies that negatively impact real people — poor people in general and people of color and women more specifically. In America, the more you know about who you are, the more of a threat you become. Most of us aren’t here to make threats. We’re here to live our lives in peace.

HC: I agree with Sacha's statement on the environment. Which also taps into class and poverty issues because when people are in constant survival mode, recycling or purchasing more environmentally friendly products is a luxury at best, and often rarely on the radar. The lack of access and education to ways to live a comfortable, yet sustainable lifestyle often feel unattainable, overwhelming, and even privileged.

SJ: “John Brown’s Gat” says a lot about what’s happening today, even though John Brown himself is a historical figure from four score and seven years ago... We are The 1865 because things don’t necessarily change. Folks of color are still dealing with issues that we faced back in 1865 — the year of the so-called Emancipation.

HC: “Peggy”  - With everyone up in arms over The Handmaid’s Tale (TV series based on Margaret Atwood’s book), it’s easy to overlook that women of color were enslaved as “breeders” hundreds of years earlier. Case in point: Margaret “Peggy” Garner, who threw her own children overboard to their death in order to liberate them from a life in bondage.

SJ: Public Enemy’s Nation of Millions album is everything. That’s it.

HC: The Clash “Know Your Rights” (“A Public Service Announcement - with GUITARS!”)

HC: I mainly channel my protest energy and intentions through creative outlets as well; writing music, DJing underground artists and music with a message, visual arts, and also showing up for other activists, as well as helping spread their messages. Deciding which places of business to support (or not) is also a form of protest. I am a firm believer in the philosophy of “do what you can where you are.” This feels like a way to shift people’s mindsets and help realize how much power we have as citizens.

SJ:  I just try to be true to myself. That’s all we can do. And that truth can lead any one of us to a cause that has value. Truth can get us closer to what needs to change. Too many lies at the moment. Too many fabricated truths. Before you can see through the bullshit of others, you’ve got to whip out the toilet paper and wipe away your own.

HC: The Human Impacts Institute is an organization close to my heart. They are heavily focused upon bridging communities both locally in New York City, as well as globally.
https://www.humanimpactsinstitute.org/
Another would be The Working Families Party for their grassroots aspect, as well as diversity and inclusion.
https://workingfamilies.org/

SJ: The rising sun gives me hope for the future. Every day we rise is an opportunity for change. I always make sure that I am prepared to seize that reality.

HC: Having conversations in passing with strangers in New York. At the end of the day, most folks want and need to be seen and heard - to connect. The fast pace of the city can also create an instant camaraderie. It always amazes me when one can connect for a moment on social issues.

SJ: Our music is on most major streaming platforms. Check us out. Our jams can put you through the right kind of changes.