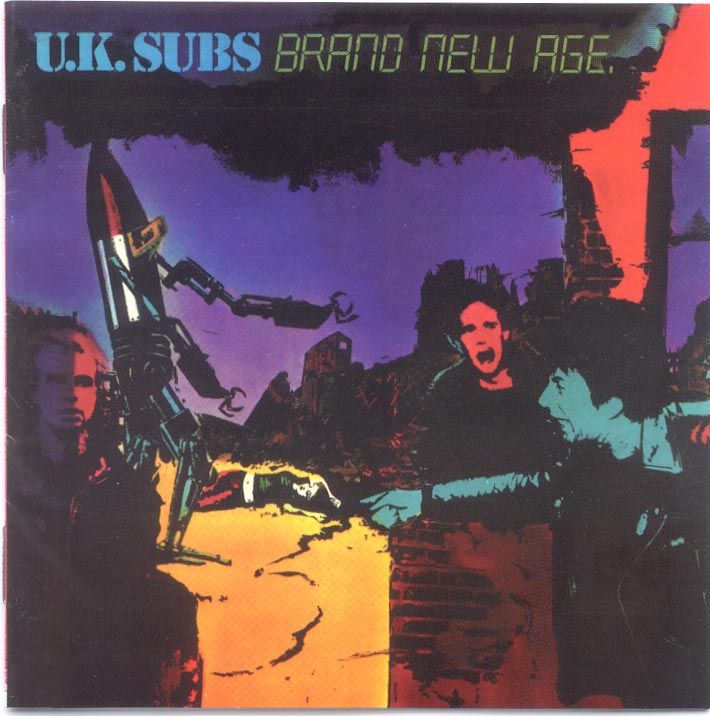 Album Review
U.K. Subs
Label: Captain Oi! Records
Reviewed by Janelle
Originally released in April 1980 on GEM, "Brand New Age" is the follow-up to the UK Subs' impeccable debut release "Another Kind of Blues". This record is basically a continuation of "Blues", as it is likewise an auditory barrage of hard-core punk anthems with sing-along choruses that just doesn't let up for a single second; even the "slowest" song, "Warhead," is powerful and edgy ﾖ undeniably one of the band's greatest compositions. And just like its predecessor, on this album the line-up consists of vocalist Charlie Harper, guitarist Nicky Garratt, bassist Paul Slack, and Pete Davies on drums.

With Harper and Garratt as the main songwriters, how could this material be anything but stellar? The pair even produced the LP themselves as well. Of course it's not like the Subs' later material isn't any good ﾖ 2002's "Universal" is a brilliant release ﾖ it's just that their first two records went above and beyond the call of duty. These are two of the finest records in British punk history without a doubt. On this reissue, like that of "Blues", Captain Oi! goes the extra mile in order to give us, the discerning listeners, the complete package, and they do a fine job. We get all 14 original tracks on the LP plus the single versions of "Kicks" (from the 1979 "She's Not There" EP), "Warhead", and "Teenage", coupled with their respective b-sides - the aforementioned EP's title track, "Victim", and "Same Thing"; "The Harper" and "Waiting for the Man"; and "Left for Dead" and "New York State Police", all essential tracks in their own right. Likewise, we get all the material relevant to this spotless LP, including lyrics to all the original tracks as well as most of the b-sides along with liner notes written by Garratt detailing the record's creation plus extra notes describing the release of the singles and how they charted in the U.K.

The disc starts off with "You Can't Take it Anymore", which really showcases the rhythm section. It opens with Slack's slinky little bass line which is then met with Davies' pounding drums, then Garratt's catchy riff is incorporated, and finally in comes Harper's repeated taunts of "You can't take it anymore." His vocals are echo-y and a little distorted, as he pretty much just spits out words like "liar" and "twit." The next track, "Brand New Age", is also fast-paced and energetic. The lyrics could describe our world today, 23 years after they were first penned:

Is the future going to be a nightmare?

Everywhere you go they're always there

Watching, listening to your every word

The past was an omen now the future's a curse

There's no such thing as a private life

They watch you in the cradle

Now they're going to watch you die.

This song uncannily describes the onset of Big Brother watching a person's every move. This is definitely the case now more than ever, what with video cameras set up taping you no matter where you go. Harper's really forward-looking and socially and politically aware, as in "Warhead", a song that shows the Subs don't have to play fast all the time. Harper, of course, is describing the world of 1980, a world threatened by the Cold War and the imminent nuclear war, but it certainly pertains to today's troubled world as well:

Where tanks are rolling

A nation in fear, another nation crying

One nation killing, another nation dying

Talk about guns and escalation

His lyrics are spot on. Carrying on with this nuclear war theme is "Bomb Factory", which begins and ends with a siren going off. Adding to the song's sense of immediacy are the hammering drums and Harper's crazed yelling, "It's burning down your world" after he lists all the countries in which bombs are being built. Too bad his messages have thus far gone unheeded. These songs are so relevant to our society today, they could have been included on last year's even more politically-saturated "Universal".

We are also treated to some government critiques, including the upbeat "Public Servant" and "Organized Crime", in which Harper describes how the "government official" is "the biggest thief by far." He also looks across the Atlantic on the memorable "New York State Police" - of course we have to have a good old song about police brutality and abusing of powers, like any great punk band. Some other notable tracks are the raucous, unrelenting "Barbie's Dead", "Emotional Blackmail", which is reprised later on, appearing on the album as "Emotional Blackmail II" ﾖ a little extra minute-long snippet featuring an extra verse, and "Teenage", which has a kind of Sixties feel to it, replete with hand claps and talk of "a real flash car/Tailfins and wire mag wheels," while conjuring up pictures of youth. Harper was, after all, in his thirties in 1980. On the same note, "500 cc" is a tough rocker about riding off with his girl on his Trident.

Put simply, this disc is full of hard-core rockers ﾖ "Kicks", "Victim", the panic-stricken "Left for Dead", "Rat Race", and "Dirty Girls", to name a few. The latter two are shorter and just really about speed. Meanwhile, "The Harper", the b-side off the "Warhead" single, is a rowdy, minute-long instrumental that includes Harper's harmonica.

If you don't already own "Brand New Age" on vinyl, do yourself a favor and be sure to pick this reissue up. All the little extras make for a great CD worthy of the UK Subs stamp. Captain Oi! certainly does the legendary band proud.