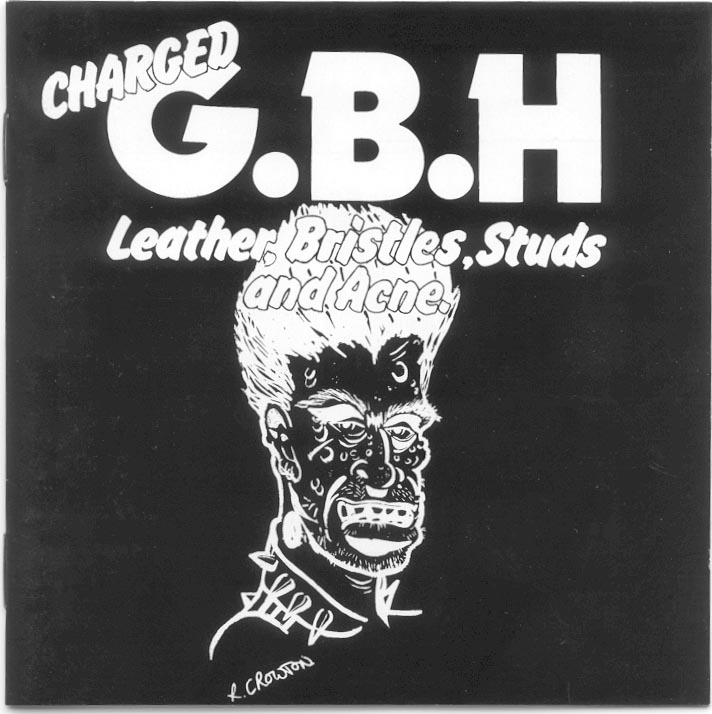 Album Review
GBH
Label: Captain Oi! Records
Reviewed by Janelle
GBH ﾖ you either love 'em or hate 'em, and for those who fall into the former category like Yours Truly, there's reason to rejoice. That's right, Captain Oi! has reissued 1983's "Leather Bristles No Survivors and Sick Boys" LP, a collection of these British hardcore punk/speed-core kings' early '80s material, all on one disc entitled "Leather Bristles Studs and Acne".

This CD is smoking with 15 brilliant, pogo-inducing hardcore punk gems. Included are all eight tracks from the original "Leather Bristles Studs and Acne" mini LP released in September 1981 plus the secret ninth track, "Alcohol" (appearing for the first time ever on CD); the "No Survivors" single released in January 1982, which also includes "Self Destruct" and "Big Women"; and the "Sick Boy" EP, backed with "Slit Your Own Throat" and "Am I Dead Yet?" which were all released on Clay. In addition, the booklet accompanying the disc contains a complete set of lyrics and liner notes written by singer Colin. This compilation is a collection of the Birmingham foursome's earliest work, predating their highly influential debut LP, "City Baby Attacked by Rats". GBH, like other British bands including UK Subs, the Exploited, Vice Squad, the Partisans, and the Varukers, forming in the years when the first wave of British punk was waning, played an important role in keeping punk and the spirit of '77 alive.

Each song on this album is just relentless ﾖ there simply are no breaks. It's just sheer and utter chaos from the get-go. The signature GBH sound is at its finest: Colin's snarling, incensed vocals, Jock's feral, super-fast guitars, Ross' thunderous bass, and Wilf's manic, tempestuous drums are all apparent and reek of such speed and ferocity, they force the listener to question his/her sanity. Well, they're not called GBH for nothing ﾖ their name, after all, means "grievous bodily harm" ﾖ and that's what their music is liable to cause. But don't get me wrong, they're not a violent band, a quick synopsis of their lyrics would certainly dispel that rumor. It's just that their style of punk is a relentless full-on attack of the senses. Seriously, crank up "Lycanthropy" or "No Survivors" in your room and let's see how much furniture stays intact. See what I mean?

The disc starts off with the bludgeoning "Race Against Time", and that's exactly what it seems GBH is doing ﾖ trying to play their songs as fast as humanly possible. The majority of the songs fuse bleak, nihilistic lyrics with aggressively fast rhythms making for a noxious combination. In greater detail, many of GBH's lyrics deal with social ills and urban issues. For instance, "Knife Edge" takes place on the streets and involves fighting and trying to survive, while "Dead on Arrival" pertains to another problem in society, drugs. Colin sings about a man with "tracks in his arm" living the life of an addict, and what this guy's prospects are: a life of crime, doing jail time, and dying "with a needle in his arm." "State Executioner" is aimed at the government, claiming this "murderous king" is "just the same as the people you kill in the government's name," and "Slit Your Own Throat" also lends commentary on the evils of the British government: "Exempt from the laws which you created/Your thought out lies becoming dated/Ruin our lives then plead for support." This song as well as "Sick Boy", a tongue-in-cheek romp relating the life of a mental patient, and the blistering finale "Am I Dead Yet?" all have an even rougher, scratchier, less-produced sound than the rest of the album, which is extremely raw and unpolished in the first place. "Self Destruct" is fast as hell and deals with suicidal thoughts brought on by the government's failings, which have led to massive unemployment and recession.

GBH also tackles another important subject ﾖ war. Both "Generals" and "No Survivors", one of their hit singles, are blatant anti-war statements. "Generals" is a memorable song on which the hammering rhythm section really stands out, while Colin growls during the chorus, "Britain needs you to die for her." Sadly, there is much truth in what he sings, for it seems as though people (patriots, the military) really do feel this way: "Polish your boots, clean your gun/Killing these bastards will be a lot of fun/Take no prisoners, kill them all." This song also shows how the generals lead the masses to war and don't even care what happens to them, as the soldiers return home injured and jobless, questioning, "Where are the generals when you need them the most?" In the middle of the song we get GBH's true feelings on war: "Death is not right, war cannot be won." The other song, "No Survivors", basically delves into the idea of nuclear war.

However, not everything on "Leather" is serious. Two of GBH's greatest songs ever are the more farcical, yet still extremely dark, "Lycanthropy" and "Necrophilia". As can be seen, GBH prefers to deal with unpleasant subjects bordering on the lewd. The former song is about werewolves and includes some ugly imagery about killing and dining on human flesh, while "Necrophilia", or an unhealthy love of the dead, as its title indicates, plunges right into the taboo, a tale of feeling "no remorse" as our narrator "screws the corpse." Nevertheless, despite the lyrics and subject matter, these two songs are classics and without a doubt their catchiest. And the secret track off the original "Leather" mini-album, "Alcohol", just sounds really messed up and twisted. They change up the speed of the vocals so they sound warped and distorted.

All in all, this is a disc full of early material that should be of vital interest to anyone who is a GBH fan and wants to complete his/her collection or for anyone who is into vicious, seething hardcore punk. If you don't fall into these categories, I suggest you step away from the disc - it is not for the squeamish.