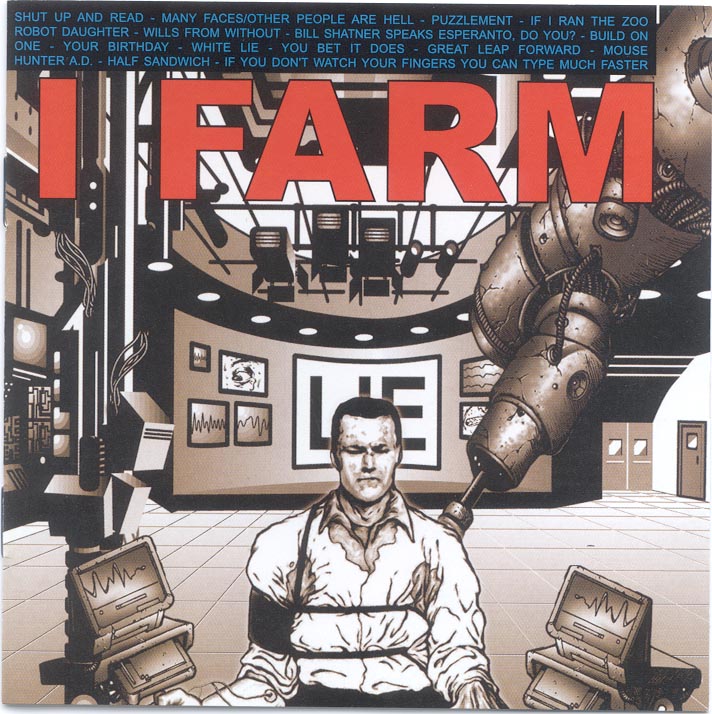 Album Review
I Farm
Label: Go-Kart Records
Reviewed by Janelle
Oh my. Brooklyn's I Farm have created fifteen tracks of mind-bending hardcore/punk/thrash perfection (or whatever the fuck this stuff is ﾖ YOU try to classify it!) with their latest LP "I Farm Is Lying To Be Popular". Lightning quick, inventive guitars. Screamed vocals. Pummeling bass. The requisite impossibly fast and jarring drums. Yeah, it's all here, fused together to form some visceral yet melodic chaos.

There are some breaks in the manic action, however, as witnessed midway through the opener "Shut Up and Read" and the exceptional mid-tempo "Build on One", but then after this track, it's back to the breakneck tempos right away with the following song, the killer "Your Birthday". Meanwhile, "You Bet It Does" features a brutal dual vocal onslaught, and the most memorable lyrics appear on the inane "My Robot Daughter", which features the wonderful line: "The Lord doesn't work in mysterious ways but I do in my basement" and later sounds like any parent standing up for his child, albeit in this case, manmade: "I'll bet you a dollar she could beat the crap out of your humandaughter." Yes, much of the lyrics here are somewhat obscure and seemingly puzzling, but there are also a couple bona fide political-themed tunes like "A Little White Lie" ("Things seem too bleak/To challenge despite ridicule/To challenge elephants and mules") and "Great Leap Forward", which is full of truths - grim as they may be - including the bold opening lines: "This ain't no New Deal and FDR is dead/There is nobody to look up to/And it seems like everything is worse than it was before."

It's hard to pick out standout tracks because of the overall high quality of the album, but if I was forced to do so (for some inhumane reason), they'd be "Many Faces/Other People Are Hell", "Mouse Hunter A.D.", which is just plain hardcore/grind insanity, the spastic and jerky "My Robot Daughter", "Puzzlement"...ah forget it! I'm just going to list 'em all, and well, that kind of defeats the point, now doesn't it? Just get your paws on this record...fast. And check them out live if at all possible; they put on one sick show.