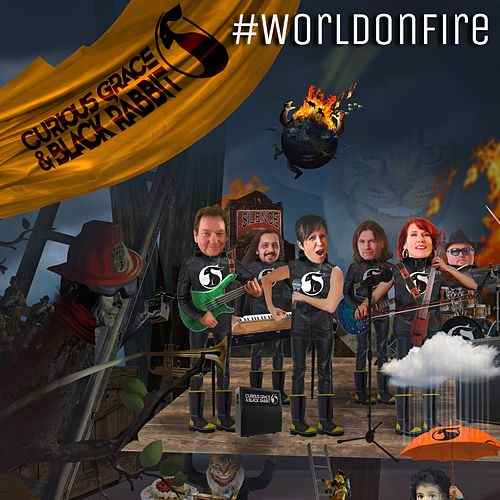 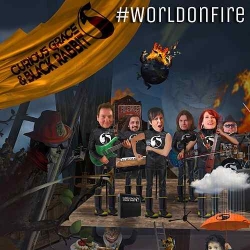 #WorldOnFire is my superlative musical discovery of 2018 thus far, as it’s a splendidly multifarious and entrancing tour-de-force from start to finish.

Led by married songwriting duo Tom and Mary Erangey, Chicago sextet Curious Grace & Black Rabbit is “an indie art rock band . . . [that] unites the talents of six performers who draw on everything from 70s/80s Brit rock, prog, and classical, to Irish traditional music and metal.” As you’d expect for such a description—as well as influences that include Thin Lizzy, Queen, Joe Jackson, the Beatles, Elvis Costello, ELO, and “the guy who plays down at the pub on Saturday nights”—their music is wonderfully eclectic, dense, and simultaneously celebratory and grave.

In particular, their latest LP, #WorldOnFire, is charmingly complex yet welcoming slice of fantastical social commentary. Billed as “an album for this moment,” the band notes that it was “born out of the madness and magic of living in a Twitter-driven world that can’t tell whether a dream is upside down or downside up.” In creating it, the troupe “tapped into the angst . . . the defiance . . . the uprising” to create a record that “celebrates complicated dreams, heroines, and heroes.” In a nutshell, they evoke the lively elegance of Phideaux (including male/female vocals), the steampunk theatrics of Gandalf’s Fist and Dirt Poor Robins, and the sobering deliveries and commentaries of Andy Tillison (The Tangent) while yielding a vastly gripping, imaginative, meditative, and cohesive conceptual production.

Of course, the three scattered “World on Fire” interludes inherently give the sequence a sense of weighty continuity¸ with each offering a different take of the same core composition. Specifically, the first part opens the LP with a child’s voice (which also reappears as the disc progresses) before a solemn acoustic singer/songwriter rendition goes from muffled (as if it’s being played through a 1940s radio) to clear; in contrast, the second variation is a piano ballad and the third is dominated by cathedral organ. (Each piece features different vocals as well). Combine all of that with the fully developed closing song—a flamboyant amalgam of adventurous rock arrangement and mournful singing, with allusions to modern American conflicts—and you can see how the eponymous entries alone are worth the price of admission.

Thankfully, #WorldOnFire is filled with other captivating inclusions. For instance, “Scars and Children” is a commandingly carnivalistic ride of intricate riffs, soaring harmonies, and other quirky yet beautiful instrumentation that makes it feel a bit like an arena rock take on the Bonzo Dog Band’s “Equestrian Statue.” Afterward, “Make It Rain” dominates with playful dramaturgical force, “Fat Cats” goes full-on progressive rock extravagance with its elaborately hypnotic counterpoints and parallels, “Magic Girl” is sublimely symphonic and angelic, “Laura Feeney” is a captivating slice of Gaelic storytelling, “Lightning” is delightfully cinematic and colorful, and “Song of the Innocent” is festively reflective. Honestly, it would take a far longer write-up to truly detail not only everything that makes each song so full of character, intrigue, and ambition but also how cleverly those tracks are tied together with recurring motifs.

#WorldOnFire is my superlative musical discovery of 2018 thus far, as it’s a splendidly multifarious and entrancing tour-de-force from start to finish. As vividly sophisticated and jovial as it is earnest and cautionary, the album radiates striving and characteristic songwriting, musicianship, production, and even acting. Thus, the Erangeys and crew—guitarist Mike Conley, keyboardist Bojan Kolevski, drummer Scott Way, and vocalist Heidi O’Toole—should be championed by anyone who adores quirky, genre-defying music packed with substantial world-building, heart, and intellect.