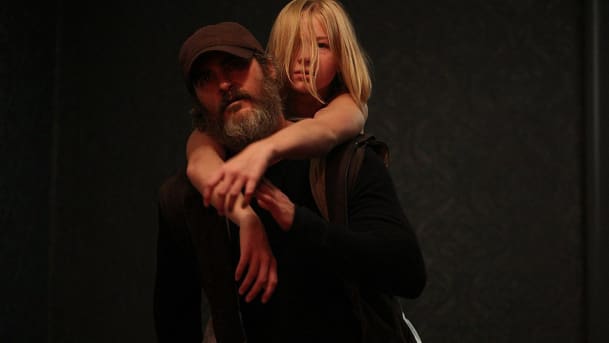 Director Lynne Ramsay is no stranger when it comes to adapting thriller novels to film. Drawn to themes of grief and death, her latest work for You Were Never Really Here (based on a Jonathan Ames' novella) stars Joe (Joaquin Phoenix), a ruthless and brooding hitman suffering from post traumatic stress disorder hired to save adolescent girls from sex trafficking rings in various cities. Wrapping up one job and embarking on the next, Joe frequently struggles with suicidal thoughts and intense flashbacks of his experiences as a war veteran and memories of his abusive childhood, yet kindles a degree of sensitivity as he cares for his aging mother (Judith Roberts) and protects Nina (Ekaterina Samsonov), one of the young girls he is hired to rescue. Presented as a disjointed puzzle, Ramsay refrains from laying out all the pieces of the story in a succinct and linear fashion, instead trusting the audience to form connections between the inner workings of a damaged and fragmented conscience.

Consumed with both physical and psychological scars, Joe's way of coping in life often leans towards self-asphyxiation and a barely there resistance towards plunging a knife in his body. "I heard you were brutal", remarks one of his clients as Joe relies on blunt methods of accomplishing his assignments, not afraid to knock someone out with a swift punch and tending towards a hammer and duct tape rather than an assortment of weapons and bullets to carry out his work. Ramsay's choice of depicting bloodshed is nothing short of calculated, often leaving his inflicted violence hidden from the screen and left to the imagination of the viewer. Shadowing himself in an oversized hoodie and jeans, Joe lurks in alleys and narrow hallways at night, isolated from society with only the voices inside his head providing any company, albeit tortured companionship at that. Incorporating sparse dialogue, You Were Never Really Here offers mere splinters of insight, playing out like a slideshow using flashback techniques, brief scenes of security camera footage and images shown on cracked mirrors, leaving the gaps and what's consciously removed up to subjective interpretation.

Primarily set in New York, the city's discernible grit and industrial elements amplify the film's churning tension and darkness. The constant traffic and the rush of cars loom over Joe's agitated nature, the plowing noise of a subway pulling in to the station right before he leans back from the grip of falling forward into the tracks seeming to provoke even more restlessness. With Jonny Greenwood (of Radiohead)'s instrumental score weaving pulsating electronics and ominous tones, even the sound of a coffee maker in a silent house leaves a feeling of impending internal anxiety. Instilling the act of counting backwards as a means of disassociating from previous or current trauma, the process coaxes a near meditative quality against the chaos and brutality of the characters' surroundings. The film blurs the line between reality and fiction; coupled with Ramsay's ability to portray multi-layered and fully fleshed characters caught within an incessant cycle to tear oneself away from the anguish of internal demons yet also recognizing that trying to escape from them is futile renders You Were Never Really Here worthy of multiple viewings.