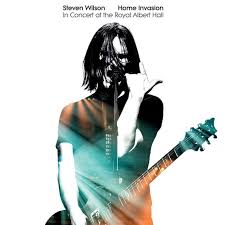 Home Invasion is a must-buy for fans of Wilson, obviously, but also for anyone who loves complex instrumentation, unparalleled songwriting, and immaculate filming.

English virtuoso Steven Wilson is revered almost as much for his live performances as for his studio output of immensely varied yet consistently brilliant songwriting and striving arrangements. Be they as a solo artist or as part of a band, his shows are virtually matches in terms of providing near-perfect renditions of his repertoire alongside a visual feast of colored lights and thought-provoking videos and photos. Thankfully, his latest concert film, Home Invasion, is likely his strongest yet in achieving that magnificence. A mixture of tunes from his latest full-length (2017’s To the Bone), past solo stuff, and a surprising amount of Porcupine Tree classics, it’s a breathtaking testament to his artistry.

Filmed at the end of March 2018 (on the third and final night of his residency at the Royal Albert Hall in London), Home Invasion “is put together from footage filmed on multiple cameras from every conceivable angle in the auditorium and on stage” (as the press release states. More on that in a bit). In our recent chat for Rock and Roll Globe, Wilson admitted that he and the rest of the crew— touring guitarist Alex Hutchings, drummer Craig Blundell, bassist Nick Beggs, and keyboardist Adam Holzman—were “quite relaxed” because they’d “already played the first two nights and . . . understood the dynamic between [themselves] and the audience.” He adds:

Other things, like working out how the sound will be in a venue, can take a while to get used to. We came on stage that last night and we felt very relaxed. When you do a live filming, you’re self-conscious because there’s that red light staring at you. You think, Oh, god! I’m being filmed. I better not make a mistake. We didn’t have that because it was the third night. Hopefully, that feeling of being unself-conscious comes across. . . . It’s got very little editing, too, aside from some quick fixes here and there. It’s very, very faithful to that night. I cut out a lot of the talking I did in-between because it’s not the sort of thing people want to see more than once. Apart from that, it’s a complete document of the show.

Indeed, Home Invasion is surely among the finest live releases Wilson has ever made, and it just might be the best concert film of 2018 as well.

Expectedly, the set highlights many of the top tracks from To the Bone. For instance, they start with sing-along gem “Nowhere Now” and then touches upon the heartrending and socially conscious “Refuge,” the confessional and industrial “Song of I,” the mesmerizing “Detonation,” the commendably dynamic “The Same Asylum as Before,” and perhaps his most divisive song ever (which he relishes), the unabashedly poppy “Permanating,” among others. All of them are replicated remarkably well—with a few alterations and/or additions here and there—yet the highlight of the To the Bone portion is easily “Pariah,” a gorgeously earnest and catchy duet that finds Ninet Tayeb (who sang on the record, plus on 2015’s Hand. Cannot. Erase. LP and 2016’s 4½ mini-album) joining the band in-person and on screen. They sound as magical on stage as they do on the official version.

Speaking of Hand. Cannot. Erase (and other non-To the Bone material), the quintet does an excellent job of fusing “Home Invasion” and “Regret #9” into an overtly crowd-pleasing frenzy of emotion and technique. Later, “Ancestral” features a stunning guitar solo by Hutchings as Wilson acts as a second keyboardist. Outside of that project, 4½’s “Vermillioncore” is further vindicated as one of his best instrumentals, while the closing title track from 2013’s The Raven that Refused to Sing ends the night, too, and leaves the audience in awe with every ounce of gut-wrenching splendor you’d imagine. Even more endearing, however, was how much attention the group paid to Wilson’s stint in Porcupine Tree, as they breathed new life into emblematic pieces like “Lazarus,” “The Creator Has a Mastertape,” “Arriving Somewhere but Not Here,” “Sleep Together,” and “The Sound of Muzak.” (He also did a lone and rather grungy take on “Even Less” that's quite interesting.)

As usual, the sights do a fantastic job of supporting the sounds. In addition to an array of shifting colored lights to suit different vibes, the screen behind them displayed typically enigmatic pictures and movies, including men with papier-mâché heads fighting in the woods, clones in all black attire marching in place,  close-ups of a woman’s face as the setting around her changes, the videos for “People Who Eat Darkness” and “The Raven that Refuse to Sing,” and much more. Also, “Permanating” saw several dancers adorn the stage (underneath rainbow flickering), and in general, the direction and editing were faultlessly cinematic in using multiple angles – as well as Kaleidoscope and split-screen effects – to portray the band, fans, and venue in all their glory.

When it comes to bonus content, Home Invasion mostly satisfies as well. The primary allure a brief interview with Wilson in which he discusses his childhood draw to the Royal Albert Hall and the presentation and normality—or lack thereof—of live performance, to name a few topics. Beyond that, there’s footage of three rehearsal compositions: “Routine” (feat. Tayeb), “Hand Cannot Erase” (feat. Tayeb), and a stripped-down version of his most gorgeously devastating and ingenious song (which is truly saying something), “Heartattack in a Layby.” The package is certainly light on extras, but what’s here is solid and you really can’t complain when the main attraction is so extraordinary.

Home Invasion is a must-buy for fans of Wilson, obviously, but also for anyone who loves complex instrumentation, unparalleled songwriting, and immaculate filming. At roughly 150 minutes in length, the show itself is a tour-de-force account of exceptional players bringing to life a singular vision, and while the supplemental portion is sparse, it nonetheless offers worthwhile intimacy and context from behind-the-scenes. Thus, Home Invasion gets to the heart of Wilson’s one-of-a-kind brilliance like no other release has, and it should be celebrated as such.