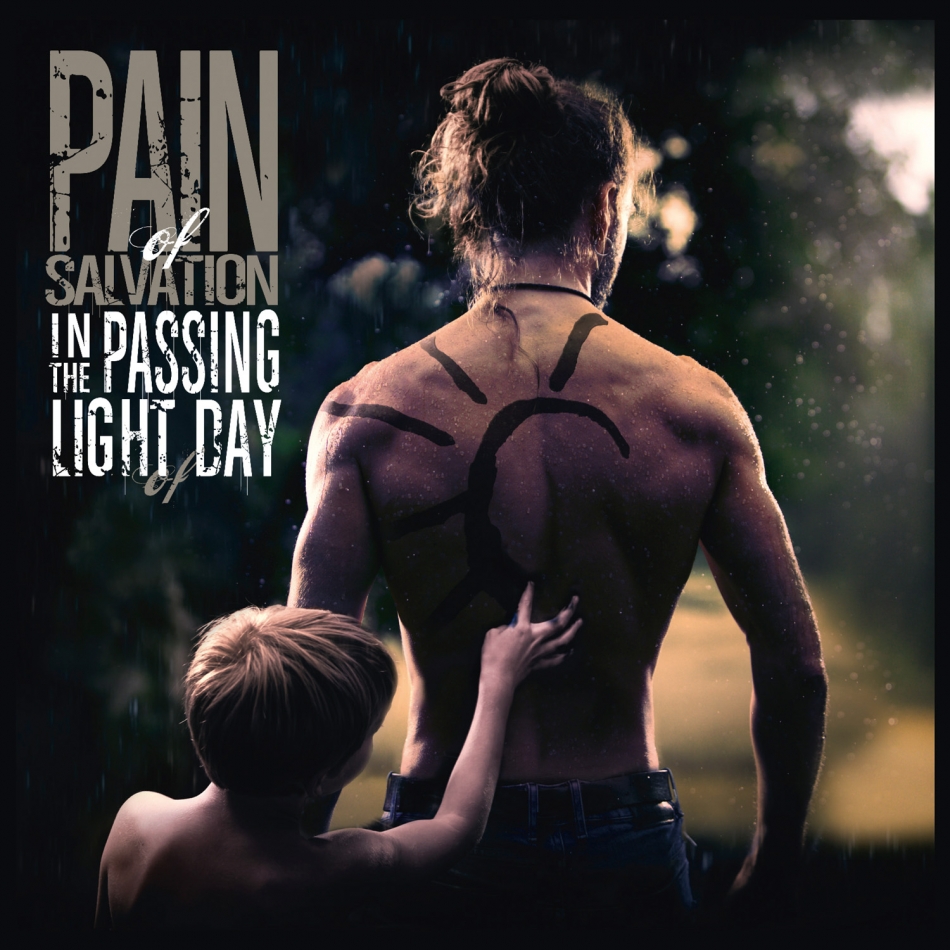 'In the Passing Light of Day' Cover 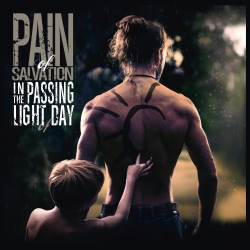 Album Review
Pain of Salvation
Label: Inside Out Music
Reviewed by Jordan Blum

In the Passing Light of Day isn’t Pain of Salvation’s finest work, but it surely surpasses their most recent records, making it their best effort since BE.

Swedish progressive rock/metal outfit Pain of Salvation has always been exceedingly distinctive. Rather than emulate the virtuosic intensity of genre pioneer Dream Theater (as countless successors have) or lean towards either the luscious colors or bleak beauty of homeland heroes like The Flower Kings, Beardfish, Opeth, and Katatonia, mastermind Daniel Gildenlöw (who founded the group twenty-five years ago) infuses his work with a bounty of idiosyncratic touches (such as experimental transitions, interwoven melodies, and most notably, his remarkably ranged voice) to create conceptual art that feels solely his. This was especially salient on the band’s initial four albums, whereas 2004’s BE was in its own grandiose-work-of-genius category and 2007’s Scarsick—as well as the subsequent Road Salt duo—represented a shift towards a more straightforward, hard rock foundation.

While these last three releases were certainly enjoyable and sufficiently distinguishing, they simply weren’t as special as what preceded them, which is why it’s such a relief that quintet’s newest effort (with a mostly new line-up), In the Passing Light of Day, is a return to form of sorts. On the surface, it sounds like the logical follow-up to 2011’s Road Salt Two, yet its increased emphasis on tonal and compositional variety and complexity easily evokes masterpieces like 2000’s The Perfect Element, Pt. I and 2002’s Remedy Lane. Thus, the LP should appeal to fans of any of Pain of Salvation’s phases, as it’s their best effort in over a decade.

Much like Scarsick veiled that it was also The Perfect Element, Pt. II, Gildenlöw has confirmed (via our interview for The Classic Rock Society) that In the Passing Light of Day could be viewed as Remedy Lane, Pt. II since both are essentially autobiographical allegories about him and his wife. Specifically, this sequence “is inextricably linked to the near fatal [flesh-eating] illness that [Gildenlöw] spent much of the first half of 2014 recovering from. . . . Taking the hospital bed as a narrative hub, the lyrical and musical themes touch on all the conflicting feelings that run through a person’s mind when presented with the prospect of death and the passing of life.” In addition, he comments (via the official press release): “That’s not to say however that all this record presents is blackness. This full-length also shows the beauty of the transition, of the inevitable. And of the hope of a tomorrow, the hope of change, no matter how frail and naive that hope may be.” In fact, In the Passing Light of Day provides both some of the heaviest and softest music Pain of Salvation has ever made, which captures well the aforementioned cognitive dissonance Gildenlöw felt during his ordeal.

This duality is readily apparent on opener “On a Tuesday,” whose early outburst of crunchy riffs and hellish percussion soon gives way to Gildenlöw’s trademark whispered narration. He presents the “narrative hub” from the start, too, remarking, “I was born under this building; it was the first Tuesday I’d ever seen, and if I live to see tomorrow, it’ll be my Tuesday #2119” as he ponders destiny and then launches into an intense, high-pitched chorus. This segment is alluring enough, but the track really starts to appeal once a bittersweet piano motif takes over and, combined with strings and woodwinds, provides a tragic yet serene backdrop for his childlike laments. It’s an unexpected transformation that reveals how multifaceted and ambitious Pain of Salvation still is. From there, more heaviness ensues until the last passage is introduced; it begins with piano notes and Gildenlöw’s pained voice and soon builds to include industrial percussion and various other distorted effects, culminating in an emotional, epic, and magnetic finale. These movements, coupled with his tonal fluctuations and the subtle bits of foreshadowing throughout, make “On a Tuesday” an exceptional starting point that recalls earlier achievements like “The Perfect Element” and “Beyond the Pale" (from Remedy Lane).

Things become more conservative with “Tongue of God.” A mournful, Camel-esque introduction is quickly assaulted by aggressive instrumentation and spiteful verses, all of which build effectively to a catchy—if also conventional—chorus that showcases Pain of Salvation’s characteristic deep backing vocals. Afterward, “Meaningless” declares its infectiousness from the get-go, with an initial—and central—note progression (supported with an indiscernible but stylish timbre) that hypnotizes you as riffs and steadfast syncopation explode around it. Likewise, Gildenlöw sounds as seductively sinister as ever delivering some of the most gripping melodies in the collection. It’s no wonder that the band chose “Meaningless” as the lead single from In the Passing Light of Day, as every moment of it is entrancing. In a way, it carries the same kind of engulfing accessibility that made “Sisters” (from Road Salt One) impossible to forget, so it’s guaranteed to get under your skin in the best way possible.

“Silent Gold” is a poignant piano ballad that demonstrates how strong the band’s songwriting can be beneath only a few classy and warm embellishments, while “Full Throttle Tribe”—which begins with the sound of a ventilator to reinforce the hospital theme—is a riveting rocker highlighted by intricate rhythmic shifts and a sorrowful and sparse middle portion that truly conveys the isolation and defeat Gildenlöw must’ve felt during treatment. Unfortunately, the consequent “Reasons” proves to be the weakest entry in the set due to a blend of frequent annoying shouts and an overarching generic metal arrangement; even so, the call-and-response technique during the verses adds tender spirituality; it's as if angels are questioning Gildenlöw at Heaven’s gate, and the opening block harmony recalls 70’s icons like Jethro Tull and Gentle Giant.

Luckily, the subsequent trio is consistently enjoyable. “Angels of Broken Things” is dramatic and heartfelt, with an absorbing tempo, sophisticated melodies, affective lyrics, and an explosive guitar solo near the end making it shine. “The Taming of a Beast” follows and is more commercial yet mysterious, with an electric piano riff leading the charge; it also contains a very subtle allusion to Remedy Lane, which is cool. As its name suggests, “If This is the End” is a slow but impactful dirge decorated with accordion and guitar lines that feel plucked straight from “New Year’s Eve” (from One Hour by the Concrete Lake). The way every element evolves from modest acceptance to enraged defiance is masterful, and it even references “On a Tuesday” and “Ending Theme” (from Remedy Lane) to add more conceptual continuity.

In providing these insinuations, “If This is the End” also ingeniously hints at layers of the title track, which closes the album on a highly emotional—though a bit disappointingly underdeveloped—note. Essentially, it feels like Gildenlöw’s hypothetical farewell to his wife and last chance to seek forgiveness for his mistakes. The first section is another sparse acoustic ballad consisting of elegiac guitar notes and regretful reflections. He bares his soul and retraces their history with moving simplicity and specificity, uttering lines like “Love, don’t be afraid . . . I’ll be here for you always / My lover, my best friend” to tug at your heartstrings. These verses, as well as the chorus—“You’re watching this slowly sleep away / Like the passing light of day”—truly capture the beauty and tragedy of his situation; listening closely, you can feel yourself in these moments, realizing how wonderful your relationship is while also facing the likelihood that it’s all being taken from you by fate. Halfway through, the composition shifts to a more full-bodied and confrontational stance, allowing Gildenlöw to atone for “All those times that [he] went away / All those times that [he] couldn’t stay.” In doing so, he hones in on that desperate urge we’ve all felt to go back in time and correct our misdeeds. The remaining minutes retreat to the opening portion before fading out with more outcries over another glorious blend of strings and woodwinds (and faint ventilator sounds, of course). All in all, the track is an extraordinarily honest, gorgeous, and distressing aural confession that, despite not offering enough multilayered variety to wholly warrant its duration, ranks among Pain of Salvation’s greatest pieces.

In the Passing Light of Day is a triumph in many ways. Beyond the fact that its very existence is miraculous considering how ill Gildenlöw was, the LP is a testament to how creative and consistent he still is after spearheading the band for over two decades. On that note, the new players do a fantastic job from beginning to end while also cementing the fact that as long as Gildenlöw is steering the ship, Pain of Salvation will retain its distinctive identity. As the saying goes, art imitates life, and In the Passing Light of Day certainly represents both a literal and creative rebirth for its mastermind; it’s not Pain of Salvation’s finest work, but it surely surpasses their most recent records, making it their best effort since BE.