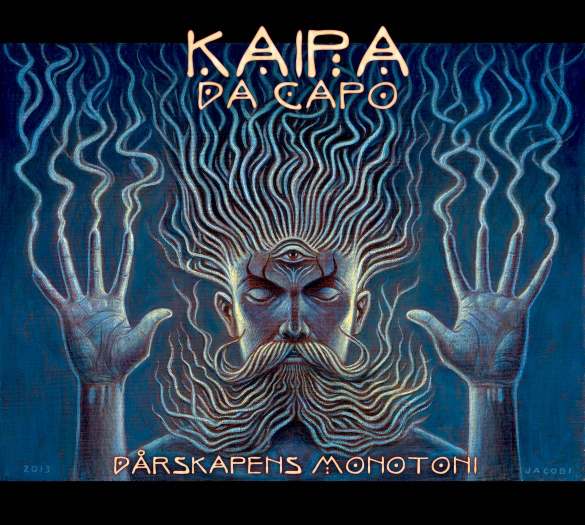 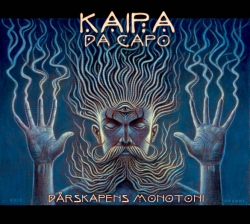 The history of Swedish outfit Kaipa is a bit complicated, so I’ll keep this as concise and straightforward as possible. Between 1975 and 1982, the group issued several LPs and played a major role in the regional take on progressive rock; it also spawned the career of guitarist/vocalist Roine Stolt, whose more recent projects, like The Flower Kings and Transatlantic, have made him a household name to genre enthusiasts. About fifteen years ago, founding keyboardist Hans Lundin reformed the group with brand new people and has since released several more efforts, with the last one being 2014’s stellar Sattyg.

Now Stolt has joined with original drummer Ingemar Bergman and original bassist Tomas Eriksson, as well as two newcomers—leads vocalist Michael Stolt (Roine’s brother) and keyboardist Max Lorentz—as Kaipa DaCapo (which translates to “from the beginning,” so it’s a fitting moniker) to recapture the original magic for a fresh audience on Dårskapens Monotoni. Seeing as how Stolt has always had a very distinguishing influence, it’s not surprising that the LP packs the same sort of luscious colors, intricate but playful arrangements, and robust melodies that make not only his work but Swedish progressive rock in general so special. In other words, it doesn’t really add anything notably fresh into the field, but it’s certainly a cherishable entry into it.

The title track introduces the sequence in typical Stolt fashion: poised woodwinds, strings, piano, electric guitar, and percussion fuse to induce a triumphant sense of aural summer (there are even some scattered bird chirps for good measure). Of course, there are also bursts of dramatic complexity in its initial few minutes, which help build anticipation for the proper start of the song roughly halfway in. Naturally, the frenzy dies down once Michael Stolt takes over with his gritty and deep voice. Obviously, his dominance is a major reason for why this doesn’t sound quite like another Flower Kings album, and thankfully his tone fits the music well (especially during its heavier moments). He even commands a downright sinister narrative near the conclusion, and the way it counters the overtly playful nature of the composition is admirable. The final moments—consisting of soaring guitar notes, choral chants, and spacey sounds—mark a glorious and atmospheric finale.

There’s definitely a heavy blues/rock ‘n’ roll foundation underneath “När Jag Var En Pojk” that allows it to both maintain proggy eccentricities and strike a more commercial resonance. Afterward, “Vi Lever Här” returns to the ethereal nature of the opener while introducing new elements, such as acoustic guitar governance and heavenly harmonies. It’s also the shortest contribution thus far by a considerable amount, so it’s more condensed and overtly focused, too. Coupled with the all-encompassing bright hopefulness that cascades across the landscape, these factors make “Vi Lever Här” one of the standout selections. Likewise, album centerpiece “Det Tysta Guldet” sets itself apart most by allowing iconic vocalist Merit Hemmingsson to lend her comforting timbre to its opening and closing portions. Although it’s a bit disappointing that she’s not prevalent for the majority of it, her presence is powerful enough at the bookends to have an impact.

“Spår Av Vår Tid” is a [relatively] brief ballad that immediately attracts due to its Steve Hackett-esque acoustic guitar arpeggios; fortunately, it goes on to include more luscious harmonies, emotive guitar licks, and even various bells to give it an extra Christmassy kick. From there, the true epic of Dårskapens Monotoni, “Tonerna,” takes over. Clocking in at just over seventeen minutes in length, it’s a masterful composition bursting with vibrancy and skillful musicianship (including a spotlight moment or two for just about every player), and it expectedly goes through the most transitions of any track here. Its last section is particularly remarkable for packing some truly peculiar sounds, like children cheering, lasers shooting, roosters clucking, and objects falling. As a result of all that madness, closer “Monoliten” acts as a grand six-minute outro whose most tranquil grooves evoke classic Camel.

Dårskapens Monotoni doesn’t truly bring anything new to the table; rather, it nails the established components that make Swedish progressive rock so special. More specifically, it’s not a significant departure from Roine Stolt’s formula, either, but then again, he does what he does so damn well that his method is always welcome. Perhaps what’s most outstanding about this release is how confident, steady, and refined it is considering how long it’s been since its creators have worked together. Reunion albums are usually, well, subpar in comparison to their benchmark predecessors, so the fact that Kaipa DaCapo sounds as strong as ever here is remarkable. Let’s just hope that Dårskapens Monotoni stands as the first of many subsequent releases instead of just a one-time gathering.

Big Big Train - ‘A Stone’s Throw from the Line’