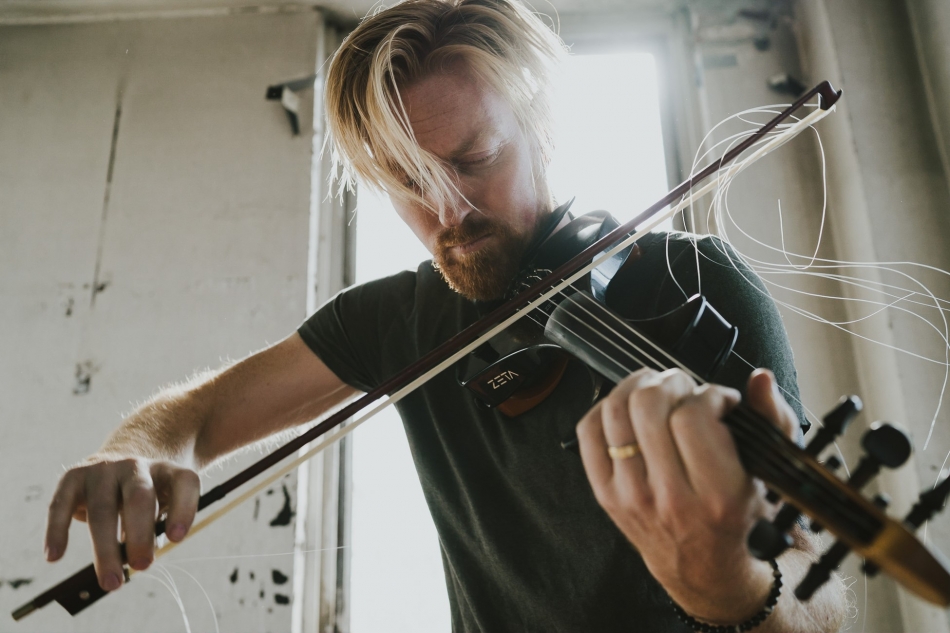 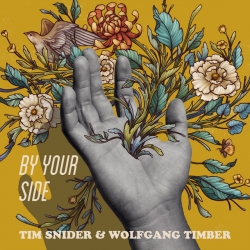 Rebel Noise recently interviewed Tim Snider, the leader of Wolfgang Timber. With his expertise on violin, guitar, and the loop pedal – as well as impressive vocals – he brings passion and dexterity to folk rock. The brand new “By Your Side” video shows Tim Snider and Wolfgang Timber having a delightful time playing together, celebrating love all around.

What was the experience like playing with Wolfgang Timber for the first time?

Oh man, so much to say on this.  It felt like music did in the beginning for me.  Honest and just fucking fun!  To give you a little context we came together as a band during covid. I had been battling some deep depression and was really working on being present.  I had found myself wrapped up in my “career” as a musician and when covid happened and the rug got pulled out from under all of us, I questioned what I was even doing and why.  During the pandemic I kept telling myself, “I should be leaving for tour today” or “I should be playing with such and such band at such and such venue.” I had completely lost the fact that I was right where I was supposed to be.  With my beautiful wife and amazing daughter enjoying the gift of this time together. I ended up reading some books, one in particular by Eckhart Tolle called, "The Power of Now” helped get me out of my funk.  I started enjoying being at home and began really treasuring the time I had been given with my family.  Once that was all in line, I started to realize just how much I was missing music and called up my friend Zack Teran to jam.  He suggested that we play with this guy Miguel Jiménez- Cruz that I had heard about but didn’t know all that well. Miguel invited his friend Lucas Arizu on guitar and we later learned that this guy plays everything.  We also have Chance Utter on percussion from time to time, one of the most talented percussionists I’ve ever met who knows more about folkloric music than all of us combined.  It was love at first note, haha.  Seriously though, music is a lot like dating.  There has to be chemistry and the best players don’t always make the best band. There is no other group that I would rather be playing with.  These guys are world class on and off stage.

What do you believe the violin adds to a song?

One of the things I love most about the violin is that, I think it’s the closest instrument to emulating the human voice.  It tugs at our heart strings.  I’ve been playing the violin since I was 4 years old and as an introverted kid who often played in the sandbox by myself it became my voice and a way to say things that I couldn’t with actual words.  It still is.  I’ve learned over time and a shit-ton of practice how to express myself with vocabulary however I’m still a person who feels more than I’m able to speak. Through the violin I’ve heard angels, had out of body experiences, communicated with ancestors, and felt things that I still can’t explain.

The scenery is gorgeous and adds warmth and beauty to the visual! Did you immediately envision an environment like this during the brainstorming process for the video? What was it like bringing the video to life?

Everything about making this video was a test for us.  We had a completely different vision at first and it all just kinda fell apart in flames.  Our original videographer and producer fell out of contact weeks before we were supposed to shoot and we had no idea what we were going to do. I think sometimes works of art have a soul of their own and this one was trying to tell us we had it all wrong. So I did the only thing I could.  I said alright video, if you want this to happen, we could use some help.  The next week we met Tianna, who ended up producing and filming the video, randomly at a private event we were playing in the Seattle area.  Right off the bat I knew she was the one for this project, just had that feeling.  We started brainstorming and eventually came up with the new concept.

We flew her down to Reno, where the band lives, and had a one-day window where everyone’s schedule finally met up. We had at that point picked out a few locations in Tahoe and had the whole game plan. The only kicker was that week there had been a massive fire in CA and all the smoke was so thick up there that you couldn’t even see the sky. The day before the shoot we were scouring google Earth looking for alternative locations that wouldn’t be filled with smoke and had back up plans to drive several hours south or north depending on the winds.  Wildly enough we woke up the day of the shoot and there was a pocket of clean air just west of Reno in a little area called Verdi, NV.  We took a chance, woke up at 6am and experienced one of the most beautiful sunrises I’ve seen.  As soon as we finished filming, right on schedule, the smoke rolled in and all you could see was grey.  This video definitely had a strong will on it’s own of what and where it wanted to be. Tianna did such a fantastic job and it was pretty effortless working with her.  This was the band's first music video and I’m proud of everyone who worked on it. I also am proud at the simple fact that we didn’t give up on it when things got tough.  Funnily enough as I’m writing this, I’m realizing that this is exactly what the song is about… so there you go… lesson learned video.

I know you explained that you wrote: “By Your Side” for your wife. How did she react to the track when she heard it for the first time? Does she have a favorite part of the song or video?

I actually never meant to record or release this song in the beginning. I just wanted to write a song as a surprise for her birthday and let her know how much I appreciate her and that I’ve got her back like I know she’s got mine.  We were surrounded by friends and family when she first heard it and there were definitely tears flowing around the room even if the majority of them were mine, haha.

We ended up using some footage from our wedding in 2016 throughout the video and she said it was cool to remember that special day and see it together with other people loving moments. To her, it made the song even more special.

How do you hope “By Your Side” impacts and influences listeners? What do you want viewers to feel while watching the music video?

We really just wanted to acknowledge the people in our lives that have been there for us through thick and thin. It’s a crazy time to be a human, that’s for sure.  Even though at times it can feel like there is so much division in the world I think it’s important for me to remain optimistic otherwise what’s the point in being here.  It’s funny how the people closest to us that make this life experience so beautiful and ultimately worth living are often the same people that we take for granted and overlook at times.   I would love if viewers walked away from watching this music video appreciating those loved ones in their life just even a little bit more than they already do.  We could all use a bit more love, now more than ever.

What do Tim Snider & Wolfgang Timber envision for the future as a band? Are there new ideas or upcoming projects that you’d like to share?

This band came together during covid at a time where we were all reevaluating our lives, priorities and dreaming up new ways of navigation.  My dream and vision for this band is simple. I want to treat everyone involved the way I wish I had been treated in my career leading up to this moment.  While we all very much want to take over the music world like every other band out there, what’s even more important to us at this time is that we all want to do right by each other. We want to create a sustainable project that we can all thrive in while putting out the best music we can possibly imagine and connect with people along the way, all while have a blast of course.  Everyone involved on this team from band to crew is so good at what they do.  We all believe that this project has big potential and can’t wait to see where it takes us.  In the meantime, I’m personally working on appreciating what we have right in front of us and enjoying every step along the way.

We are putting out a full-length album early next year and will be touring to support that album early next March.  Until then, we have shows in Nevada, Oregon, and Washington coming up in December and look forward to sharing as much music with people as possible in the years to come.