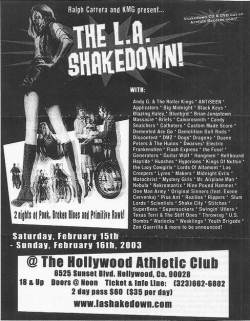 A room turns upside down, and you know you're in the right place! The back room of the Grand Avenue Hall, despite its reek of sewer and its beer-soaked floor, seemed to be upside down all weekend long! I couldn't even get passed the bar while Throw Rag played, so I opted for chatting with Custom Made-Charlie. During the Briefs and the Hunns, I was so squished against the front speakers, my left ear is still ringing. But all those observations are hardly problems, they are signs of a good show and a crowd of people with good taste and energy.

I know my contribution is a week over due, but it has taken me that long to sober up and recover from the Typhoid I contracted from….well, just about every room I was in.

Mr. Flap-Jack's overview of the weekend is an accurate, but kind one. This opinionated bitch was a little more irate after Saturday's fiasco. After 20 minutes standing in the same spot in the parking lot, I realized it was going to be a patience-needed event, one of many virtues I am lacking. Thanks to luck, once again, that I was born a woman with the gift of manipulation: ("But that guy said I could come to this line")! But Sunday did indeed make up for a lot. Not only in bands, but in fans. We had more room to breathe, in and out privledges, less confusion, and a shit load of music to choose from.

I don't want to harp on the same issues, so I'll try to donate some new disappointments.

I like beer, and lots of it. That's why I carry a camera and a pen everywhere I go. If it wasn't for photos, I would forget a lot (opening envelope of pictures, "The Stitches played? Did I take these?"). I had to rely heavily on my memory this time around though, unless I had opted for notes taken in my own blood. Apparently I missed a few episodes of MacGyver, because I have no idea what contraption can be concocted with bubble gum and a ballpoint pen. And if you think the pat down at the Palladium is a gratuitous effort these days, you should have witnessed the hand job I got from the security-girl on my way in. My boyfriend doesn't even grab my tits that much.

I don't mind pissing in the dark, but I do not take kindly to wading through other people's shit just to relieve myself (That, of course, no fault of the venue or Ralph. That's just bad table manners).

I hate that the Dwarves didn't play. I hate that the Supersuckers were refused entrance (anyone partaking in a morning cocktail at the Holiday Inn witnessed the dejection on their faces Sunday morning).

I don't like misinformation either. Half my friends made it to the Garage early, only to be told 4 hours later that we were not allowed to leave and come back. One security guard told us we could come in and out but had to wait in that motionless-line again, while the people working the ticket table said we could come right back in. Communication is a good thing, people.

I do not appreciate cutting a band short and being herded like cattle to another room with no music or bar in an attempt to fool a fire marshal, without at least announcing over the microphone what the problem is (which, by the way, probably didn't fool anyone, they just didn't want a riot). And piss on the neighboring hotel for not minding its own business anyway. We weren't all in your room, were we?

I realize that I'm lucky the show went off at all, in any form, and I applaud the efforts everyone made on such short notice, but had I known I would be left starving, chain-smoking amongst firefighters, fighting over a seat with an Asian disco queen, I probably would have skipped Saturday.

I appreciate that the bands booked at the Garage were mostly local who play around town frequently, but I feel sorry for those who traveled cross-country who missed their acts.

$5 Heineken, served in the can, is also among the pluses the venue had to offer. It's a lot less messy when pogo-ing and drinking when the beer is served in its original container. I also enjoyed the booth seating as a means of escaping the sludge and relaxing the feet.

I was also fond of the ballroom upstairs that was opened to us for Sunday's mainstage. Every room sounded great, and the sets were changed with extraodinary speed.

All in all, I've experienced much worse all-day events (after all, I did attend that horrible Inland Invasion KROQ put on). Whatever glitches and misfortunes the overall event had, in retrospect, were masked by great line ups, performances, friends, fans and hotel parties that were also part of 48 hours.

And finally, my apologies to anyone I might have offended or embarrassed, especially those in the Subway across the street around 2am on Sunday/Monday (but hey, Rita's right, the tuna DOES look like throw-up!).