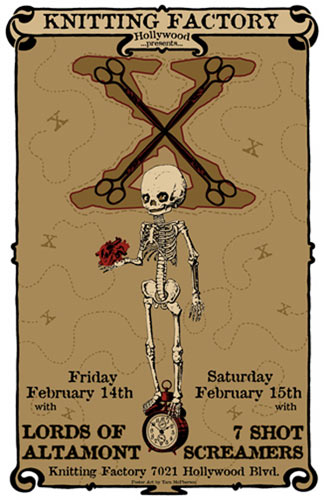 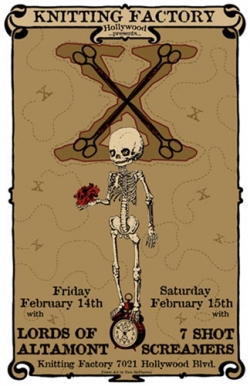 I do not celebrate Valentines Day. I'm not bitterly single, I just prefer love and appreciation to be showered upon me on a regular basis, not because Hallmark increased card prices by 55%. But when the boyfriend called to tell me X was playing on this, my most hated evening of travel (second only to New Years Eve) I could NOT resist.

I'm a youngster, who never saw X play the Masque or in someones living room, but I haven't missed an L.A. performance since 1988. With a band like this, your longevity in the scene doesn't matter. The crowd is a mix of 13 to 60 year olds, Varga girls to mohawked men, L.A. regulars to recent transplants. I even met a woman in the restroom who had brought her 16 year old daughter for her first lesson in L.A. Punk Rock101. No one wants to miss the first lady of punk rock and her harmonized henchman perform the soundtrack of the Los Angeles. I haven't seen the Knitting Factory packed so tight since the last time they played there, and I rarely see a crowd of adults go so crazy, raging with excitement in this image-conscious city.

I was left smitten and goosebumped from the opening song until the very last. After 20 something years now, the band still sounds like their albums, if not better. The music is spontaneous, emotional, painful and beautiful. They left no hit un-played from Los Angeles to Fourth of July and every poetic piece inbetween that radio stations have been too ignorant to play.

Pardon me for being a music snob, but if you don't enjoy X, especially if you're not won over by a live performance, you simply have no musical taste. I'd be willing to say it should be a pre-requisite to live in this city.

Lords of Altamont opening up the show begins a newer chapter of this history lesson, yet another well put-together L.A. band. With their biker style stage presence and organ powered fuzz rock, they set a perfect mood, and seemed to win over a very exotic crowd of concert go-ers. Featuring some new material, they gave those familiar fans a taste of what is to come, and I for one was impressed and am ready for the new release.

It was a night to celebrate love, and if I had to conform, there was no better place to do it than at a show like this. Because I love good music, I love a good crowd, I love $3 beer, and, as Randy Newman sang, "I love L.A!"