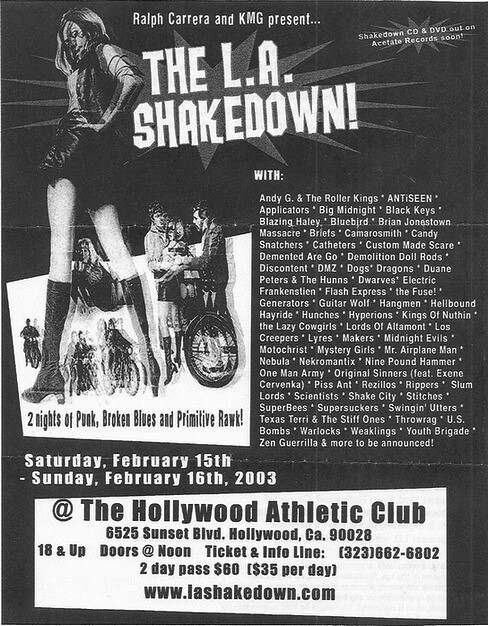 What a fucking bloody mess! This show was a long time in coming. We counted the hours and days until it would happen. Days never lasted longer in the week up to the show. $60.00 per person seemed to be OK because the 30+ bands featured looked damned great.

The last Shakedown in Vegas was dour as it just some days after the 9/11 disaster. Many cancelled their trip or didn't even bother to book due to fear running rampant in the States and the World. So this show promised to rock in bringing everyone together to share in the great sounds and booze. But what was anticipated and what actually happened were very, very far from each other...

So the show was booked last minute at the Grand Avenue Club just around the corner. But that little bit of information was not given to event attendees or to the bands that were coming in from around the World. Thanks a lot, promoters.

So cell phones were ringing non-stop trying to rely the latest info on the venue and bands attending. The next bit of disaster was the 4-hour long line that formed outside the venue. I don't know but 4 hours seems a bit long in admitting a few hundred people into a club. Fortunately we snuck into the cash-only line and waited only ten minutes but I overheard several people saying they had waited 3 to 4 hours to even get in.

Once inside we were quickly overcome with the stench of a thousand jet-lagged asses. It seems a sewer pipe broke spilling shit and piss into the small, subterranean rooms downstairs. (Later on we found out that some sick fuck wrote on the walls with his shit.) Luckily I wore my high creepers to avoid most of the slushy mess. But at last we relaxed thinking the worst was over and enjoyed a beer. Then to our surprise who should we see outside but the entire Los Angeles Fire Department with sirens blaring. A riot didn't seem entirely out of place. It seems someone or hotel had called the fire department saying there were too many inside the small venue. Immediately all outside in the patio were locked out of the stage areas and ushered up into the top floor ballroom, which was later to host an Asian hip hop dance club. I guess we were to make the false impression that the event was large enough to hold all of us. The music was stopped and we confusedly lounged about upstairs while the fire marshals counted the heads.

At last the count was in and the event was allowed to go on. But one thing was apparently forgotten by the brute staff who now didn't allow anyone to leave the concert area: That part of the event was taking place across town in Silverlake at the Garage. There were people and bands who were at the other Shakedown event and would not be allowed to get into the Grand Avenue Club. Luckily we hadn't gone to the Garage portion fearing that we would have had to wait in another hours long line. Despite the various small disasters happening at the place, the Asian dance clubbers lined up outside to gain entrance to the upper portion that was reserved for them. I fully expected an Asian hip hopper v. punk riot but the only ones who were fighting were the Asians among themselves.

So with all the mess behind us the show continued unabated that Saturday night until well into early Sunday morning.

Fortunately, the Sunday portion of the event went perfect with out any of the problems of Saturday night. Had it not gone well I think the event would have been a total waste but Sunday proved to be well oiled and immensely fun. A big FUCK YOU goes to the Variety Arts Center (I hope you burn down) and that Hotel that filed the injunction against the Shakedown. I will find out who you are soon and come down on you hard.