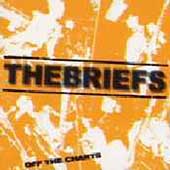 Album Review
Briefs, The
Label: Dirtnap Records
Reviewed by HeavenlyDevil
In the industry, bands are taught to fear the sophomore release. Fans pick up albums by word of mouth, by liking the art work, or after an incredible show and they become attached to that sound, those lyrics. But with "Off the Charts," The Briefs have managed to retain all of the positives of their first release, and have managed to up the bar on sing-a-along likability!

Nothing has changed in the song writing and style with this second album! "Off the Charts" hits you with 11 tracks of spunk, spaz and snappy wit that are quick to become the new crowd pleasers along side "Rotten Love" and "New Pair of Shoes." And the best part about short, poppy punk songs, is that you can probably fit all the tracks from both albums into one set!

Other faves because of the laughable lyrics and anthem-aiming effects, include "22nd Century Man," "Piss on the Youth" and "(Looking Through) Gary Glitter's Eyes."

The Briefs has strucked gold yet again with this newest work of punk-rock art, reminding us that punk hasn't lost it's sense of humour and great taste in style.

The Briefs & The Stitches