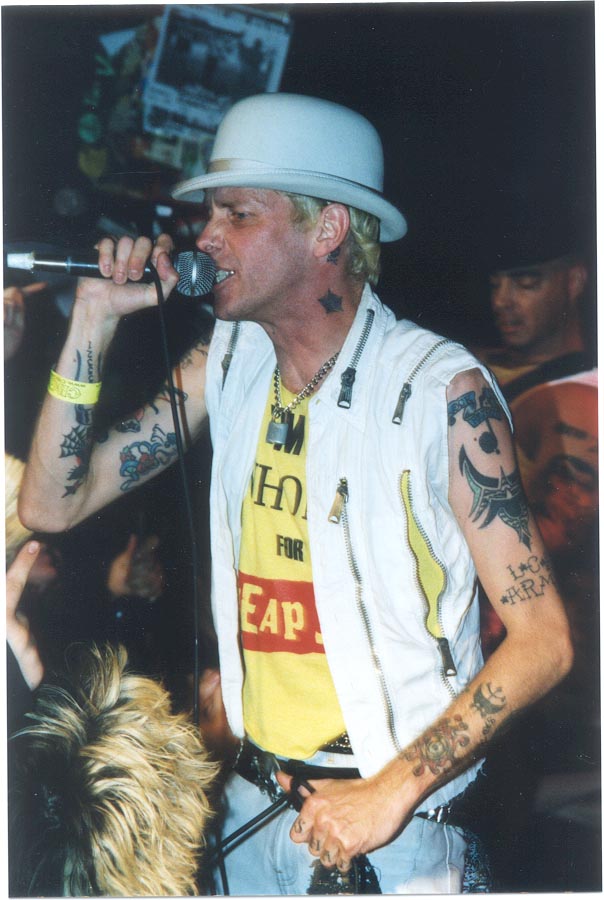 This was a fine bill indeed, and no doubt would have been even better if Cheap Sex would have been able to make it. Unfortunately, this was not to be, for the band, which features Mike Virus on vocals (original front man of the Virus) that recently released their impressive debut 'Launch Off To War' on Punk Core, were involved in a horrific car accident a few days prior to this show in Pennsylvania. Of course at a time like this, one can't be upset they didn't get to perform; rather, the crowd's thoughts must be with the band. One member, guitarist Johnny O., was seriously hurt, in turn ending their stint with the Lower Class Brats on their much-anticipated Sex, Brats, and Rock 'n' Roll tour. So, of course despite the riotous fun that was had, there was a definite underlying somberness evident as the NY Rel-X's bassist Adi collected donations for a raffle in order to help out Cheap Sex.

Still, as was said, the night was full of quality hardcore punk - some of the finest bands around - beginning with hometown heroes the NY Rel-X, who belted out about ten songs, most of which can be found on their two EPs - "Paranoia" and "She's Got A Gun." The band plays tremendously catchy, anthemic, and upbeat punk, which played no small factor in the absolute chaos on the dance floor, which was jam-packed with kids who really were excited to see this band and who were going nuts right off the bat with "Fuad's Delight." Neither the energy level of the band nor that of the crowd waned as the foursome offered up songs like "Victims," "Proles," "Third World," and "Pop Queen." The most action, however, occurred when the NY Rel-X played "Paranoia" and fan-favorite "She's Got A Gun." And they actually ended with a beauty - a cover of the frantic "Emergency," pleasantly surprising a lot of people while keeping in tune with their late-'70s/early-'80s sound.

Next to seize the stage was another band that harks back to that cultural year zero 1977, the Lower Class Brats - the best thing out of Texas since D.R.I. - who gave the crowd a taste of what's to come when their new record, their third full-length, is released in September. This quintessential clockwork band kicked things off with a little "Ultra-Violence," a nice way to get things started. Vocalist Bones Delarge in a fashionable white bowler this time around, along with guitarist Marty Volume, and new recruits bassist EVO and drummer Mike Brat, played quite a few classics off their debut LP 'Rather Be Hated Than Ignored' and the follow up 'The Plot Sickens,' like the unparalleled "Orphans Don't Run," "Bite the Bullet," "Who Controls the Media?" "Who Writes Your Rules," and the fiery "Psycho," which just beckons the crowd to shout along with the chorus of "P-S-Y-C-H-O, P-S-Y-C-H-O, P-S-Y-C-H-O/I'm a fucking psycho/P-S-Y-C-H-O, P-S-Y-C-H-O, P-S-Y-C-H-O/Come on droogies here we go!" - the ultimate unity song in a way, I suppose. "Addicted to Oi!" was another hit with the crowd, who, throughout LCB's bludgeoning set were singing along and fighting their way to the stage to share the mic with front man Delarge. Just feral stuff from the country's finest clockwork streetpunk band, who also treated the crowd to a couple covers. The guys played their fun rendition of Mad Parade's "Sex and Violence," which appears on 'The Plot Sickens' LP. The opening calls of "Sex, sex!" heralded the mayhem that would follow. And at the end of their set they played a true classic, the Dead Boys' "What Love Is." Yeah, that was sick, just plain sick.

It was rather exciting when UK greats The Skeptix came on. These guys who expose socio-political ills with such deftness in a majority of their songs and have a penchant for filling their material with anti-war messages, first hit the streets in '78 and have put out a bunch of great stuff, culminating in their 'So The Youth' LP in 1982 before fading out shortly thereafter. But, the guys are back now with a new record that just came out this year titled 'Hate And Fear.' Having not heard anything from this album yet, I was curious as to how it would sound. Well, the Skeptix played a couple off it and let's just say it's in the same manic hardcore punk-as-hell vein as their legendary early material. Some of the new ones included "Blue" and the quite heavy "Death Run," which features pleas of "Why, why the waste of lives?" But, the bulk of their intense set was comprised of older songs, which was obviously more than welcome.

They kicked it all off with the hectic "Scarred for Life," and just pummeled the audience with one fine slice of raw, ramshackle streetpunk after another. From "Next Victim," to "Traitor," the Armageddon-like "Violent Streets," "Death and Destruction," which decries the horrors and uselessness of war as does "For Your Country," and the slightly slower but still powerful "Born to Lose" - we got it all. Well, mostly. I found myself not alone in hoping they'd play "Another Day," a true tour de force, which I heard being shouted by one very persistent fellow. "Such Is War" would have been a great addition too. In any case, they played that old standby, one of their best known songs, "Routine Machine" as well as "Vendetta," which vocalist Snotty asked if people knew and apparently they did because there was a lot of singing-along going on during this angst-ridden number, and ended their set with "Got No Choice." The Skeptix came back for a short encore, cranking out one I was also wishing they'd play, "Stop It While You Can," one of their greatest with it's memorable opening guitar riff. So, yeah, by the sound of their new material and the abundant energy they brought with them to the stage, it's safe to say The Skeptix are back - a "return to hell" if you will.