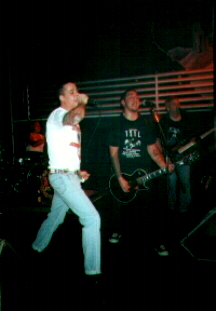 First I've to say I were more than excited to see the first show of the "Burning Ambition Tour" over here. The show opened with Woodlaus, Daybreak Boys and then the great Church of Confidence from good old Berlin, after all these incredible bands the awesome "Generators" came on stage. Hell, theyve played their asses off for all and the germans loved them. The Singer ""Doug" has so an emotional Expression, he brought so much power on stage, awesome..... The rest of the guys played their asses off for us too..... After the new songs they played some older and one of my favourite from "Schleprock": "Runnin´Riot" The crowd went crazy. After a good show we had some beers with the guys and for sure "Jägermeister" for all.

One day later I drove 1 1/2 hour to Cologne in the great RocknRoll club Underground. The crowd were a little bit smaller because it was a holiday in Germany, not so much buddys came out of their houses to rock their asses too, but nobody worried about it... The show was pretty good, Doug the singer was so drunk so what the hell should happens after it???? Yeah we played Soccer (Table-Soccer) and he lost, after some Jägermeister he was back again... Nice guys good show.

Next show was "Berlin" the great Wild at heart club, most of the germans knows this great club and the bands loves to play there all the time. It was fuckin full house, the crowd were mixed up by some punx and Psychos thats what we like, a good show with a fuckin cool crowd. The Generators were a little bit tired because the day before theyve checked the "Hamburg" Scene out and I think theyve lost their minds there on the "Reeperbahn". But again and again they played with so much Energy, they would be better and better. After all were hang around until the early morning. It seems that they really loves to play in Germoney.

The Generators fav. club, they were very excited to play there again but before theyve played I brought 5 Liters of our fav. german beer and weve drank it outside the doors and it was more then excited for all. I couldnt believe that they could play so fuckin good after all these crazy days before... Anyway later we had lots and lots and lots of beers and Jägermeister until the morning like the days before. After 3 hours sleep I drove to my last show in Mülheim 10/13/2000 Club AZ over 300 guests (Daybreak Boys and Hammerhead) I were really sad to see the guys my last time but for sure we will meet us all again for german beer (they loves it) So they played so hard and awesome, it was the biggest show which ive seen. So I can write after all these unbelievable days: "I´m sure the Generators kicks our asses so much, I will never forget the great shows and the time with them... so crazy, I were so impressed. It was 100% pure fun and I know they will come back again so so soon as possible. They´ve to play some shows in England now and then they´re back in LA..... So if you guys ever get the chance to see them playing live check it out its more then exciting."