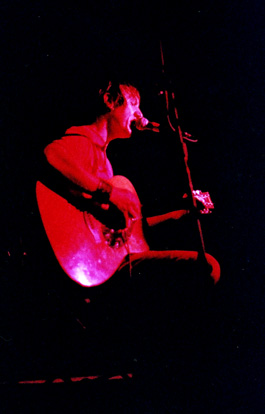 Elliott Smith is a slight, skinny guy. Smith's dark hair is long and greasy, and he takes the stage wearing three-day old stubble and a battered brown T-shirt. There is something sad and painful about Smith's demeanor, too. Upon first seeing Smith step up to the microphone, you ready yourself for a scream or an assault. But Elliott Smith's looks are deceiving. Just close your eyes and listen.

You hear a beautiful, angelic voice. And then you open your eyes. You are startled to discover a voice so unexpectedly serene coming out of Smith's mouth. For despite his cruelly disheveled appearance, Elliott Smith has been truly blessed.

Not surprisingly, fans at the Wiltern Theatre sat awestruck as they watched and listened to Smith perform. Backed by an oval-shaped video screen and a crack three-piece band, Smith opened his set with "Needle In The Hay" and "Son Of Sam." Smith, however, was out to do more than captivate by contrasting shyness with exceptional talent. Elliott Smith wanted to rock.

"It's ok. You can have fun even though it's a funeral," Smith quietly reassured audience members as they politely applauded from their seats. And after finally getting the crowd on its feet by playing "Division Day," "Bled White," and "Can't Make A Sound," Smith and company never looked back.

Smith did slow down, though, for his first encore -- "Plainclothes Man," "Between The Bars," and "Say Yes." This acoustic-based encore, like all of his songs, highlighted Smith's wonderfully gifted voice.

With golden images of big city lights flashing across the video screen, Smith and his band plugged back in and ended their second encore with an electrifying cover of Blue Oyster Cult's "(Don't Fear) The Reaper." And the seemingly introverted Smith left the stage blowing kisses to the audience.

As Elliott Smith's performance at the Wiltern Theatre proved, you should never judge music by its packaging. But you've heard that one before, right?

(Elliott Smith photos are courtesy of Lido. Please check out Lido's site at: http://lido.binaryops.com/es011203/. Thanks, Lido!)