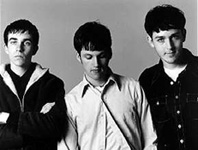 Show Review
Reviewed by Stephen Rafael
Sensing that his young audience would have been more comfortable in a non-seated venue, singer Isaac Brock felt obliged to provide a public service announcement before starting the show. "Welcome to the second night of the Modest Mouse Prison Camp Tour," Brock said, greeting the sold-out crowd at the John Anson Ford Theater. "This place is called a dinner theater, but I think it sucks. I'm a shyster, and I stole your money."

Maybe that's why Brock took the stage wearing a funny disguise -- a crooked fake moustache, which quickly fell off during the first song. But after peeling off a baggy yellow sweater to reveal a tight-fitting black tee, Brock appeared every inch a rock star. The Modest Mouse leader was clearly in showman mode, and at first, the kids were not disappointed. During an extended version of 1997's "Doin' the Cockroach," Brock played his Fender with his teeth, a la Jimi Hendrix. When a security guard tried to confiscate a fan's camera seconds later, Brock quickly came to the fan's defense. "I don't mind getting my picture taken," Brock said, stopping the show. "Why can't he use a flash? It's not hurting my eyes. How stupid!"

As Brock won over the crowd, the rest of Modest Mouse quietly lived up to its name. Wearing a baseball cap that covered much of his face, bassist Eric Judy meekly stood in Brock's shadow. Bored and content, Judy played passively while he stared down at his shoes. And although drummer Jeremiah Green exhibited bursts of power, his enthusiasm came and went as the night wore on. Even the presence of a new rhythm guitar player and a second percussionist did not add much to Modest Mouse's performance. None of the other members stepped up to help Brock sing harmonies or choruses, and strangely, they all kept to the back right corner of the stage. Whether he liked it or not, Brock appeared to be very much out on his own.

The pressure caused Brock to lose his good guy demeanor late in the concert. When fans wearing Halloween costumes interrupted "Dramamine," Brock simply looked away while they were ejected by security guards. And after performing the ominously titled, "I Came As A Rat," the band quit on Brock and left him onstage by himself. Before walking off, Brock sank to his knees and told the crowd, "I sell snake oil in the parking lot, too." Confused, the audience waited and cheered for an encore. Upon realizing that Modest Mouse was not going to return, angry fans threw trash at the stage and yelled "bullshit" long into the night.