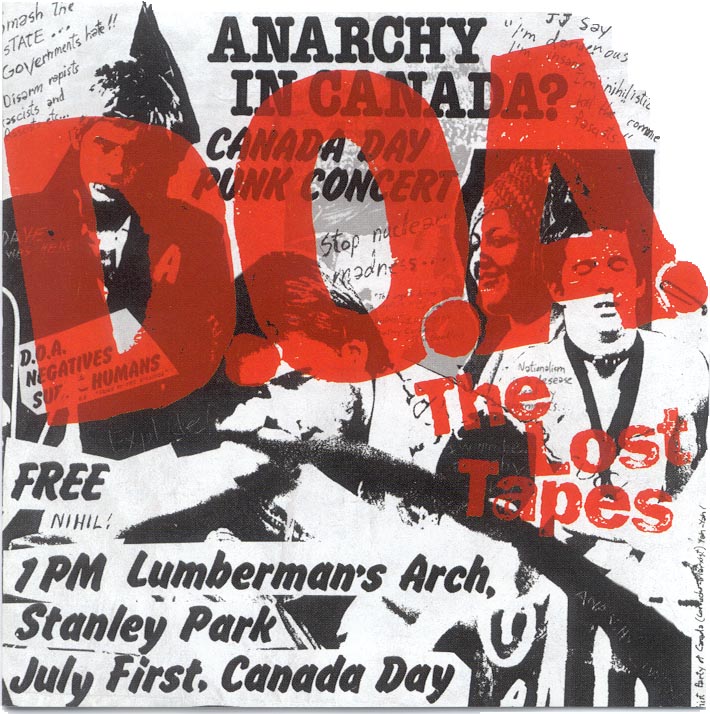 Album Review
D.O.A.
Label: Sudden Death Records
Reviewed by Janelle
"The Lost Tapes" is classic hardcore punk from originators of the genre. Forming in early 1978 in Vancouver, D.O.A. ﾖ quite possibly the greatest thing (band or otherwise) to ever come out of the Great White North ﾖ spread their sound up and down the West Coast and around the world. One of the longest running punk bands to never have called it quits along with good old Charlie Harper and his revolving door line-up that is the UK Subs, D.O.A. just shine on this record. Every bloody track is excellent ﾖ riotous, raw, fiery, energetic punk rock at its best. Sure, maybe the album itself isn't "vintage" per se, as it was released a couple of years ago, but all the tracks are classics from the band's heyday when they could do no wrong.

Led by the brilliant and outspoken Joey "Shithead" Keithley, D.O.A., especially early on, created hardcore that is essential listening for anyone who considers himself/herself even somewhat into punk (although 2002's "Win the Battle," which saw the reunion of Keithley and original bassist Randy Rampage, rocks just like the old days). And with this particular album, we get seventeen tracks of pure, unadulterated punk rock from 1979 through 1984. "The Lost Tapes" features ten alternate versions of songs found elsewhere and six never before released tracks along with one song, "Kill Kill This Is Pop," from a compilation, making this an essential addition to any diehard D.O.A. aficionado's collection as well as a good starting point for those D.O.A. neophytes.

Along with the liner notes penned by our "pal" Joey and the origins of all the songs that were compiled from cassettes and 8-tracks, we get his little D.O.A. "family tree" from '78 to '86, including what is largely considered the "original" and greatest line-up ﾖ the Trinity, if you will ﾖ Joey on vocals and guitar, Randy Rampage on bass, and Chuck Biscuits on drums, which, along with guitarist Dave Gregg, was the line-up for their unrivaled, now-legendary first and most ground-breaking records, 1980's "Something Better Change" and the follow-up, "Hardcore '81," an LP that popularized the hardcore moniker.

The band's early mixes are raw and aggressive, two elements vital to their intense sound and staying power, and when coupled with Joey's snarling, mucus-filled, guttural growls that have powered the band for twenty-six years and counting, this is just auditory bliss, plain and simple. In addition, we also get some vocals from original drummer Chuck Biscuits on the aforementioned "Kill Kill This Is Pop," and on "Murder in Hollywood," we are treated to the very snotty, Ben Weasel-like vocal stylings of bassist Brian Goble, a later replacement of Rampage. But still, the exciting unconventional vocals of Joey Shithead fuel these hardcore anthems. He has this manic quality not unlike the late great Joe Strummer, but then also uses comical inflections like the rolling of the Ls on "Liar for Hire" a la Johnny Rotten and a couple oh-so-deep lines here and there. Likewise, his feverish, ominous vocals on "Dangerman" fit the subject perfectly.

Ok, onto the hell raising tunes. The album opens with the incendiary "Smash the State," the perfect socio-political rant for the oppressive Thatcher/Reagan '80s, as Joey ponders, "Whatcha gonna do with your head in a noose?" in light of the bleak, impending fascist states that can't be far off. This is just the tip of the iceberg my friends. As can be seen, Keithley, who actually ran for the Green Party in 1996 in Canada, isn't afraid to voice his views...loudly. His patented critiquing of American society is evident as well on the unsurpassable satirical "America the Beautiful," on which Joey warns us "Lock your doors, lock 'em tight/It's the new immoral right/They wanna cleanse the home of the brave/For the master race of the USA." The band's philosophy pertaining to war is evident on "No God No War," which is quite simple really: "If there's no god, then there's no war." The full-on speedy and angry "Race Riot" and "Rent-a-Riot" are a couple more social tirades.

However, mixed in with the acute socio-political commentary, is some fine comic relief to keep it light-hearted enough, like the seemingly Ramones-influenced "The Mutant," "They Saved Hitler's Brain," which is really only a snippet of a song, as the quick, tough rocker sadly gets cut off at the nineteen-second mark, and the rowdy, good-time anthem "I Hate You." The downright disenchanted, apathetic "Suiciding" has a "Pretty Vacant" feel to it ﾖ only meaner, while "Dangerman" is a bad-ass hard rocking offering, and "No Way Out," which, especially during the pre-chorus and chorus, has a real Clash circa '77 sound with its rock 'n' roll vibe. The tough, pissed off "Liar for Hire," a song recounting a former friend's betrayal, opens with a blood-curdling scream. It's an excellent song featuring some of the best music on the album, and along with "America the Beautiful" and "Murder in Hollywood," is definitely a stand out track. The frantic, troubled-sounding "Murder in Hollywood" with that guitar riff that eats away at your brain for hours after listening to it, features a mid-song breakdown that slows things up a bit. This song just has a sense of emergency to it. The record ends with the threatening, slower, metal-tinged "Let's Wreck the Party," which speeds up midway through only to return to its prior tempo, is easily the heaviest, most menacing track included on this exceptional disc, finishing off with delirious screams amidst crashing drums and uproarious guitar licks.

So, as with any D.O.A. offering, rebellious, riotous, angst-filled tunes intertwined with more light-hearted fare are on the menu throughout "The Lost Tapes," a record that encapsulates the band's ferocious intensity and infectious energy spectacularly.