The Price of Progression 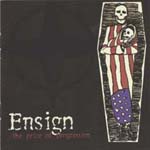 Album Review
Ensign
Label: Nitro Records
Reviewed by John B.
Ok, I got the inside scoop on a new record coming out this April 17 and this shit is straight up, pure east coast hardcore the way it's meant to be. From the first sound of crunching guitar to the final fading hint of feedback the new record from Ensign called "The Price of Progression" chugs along like a speeding freight train with grinding precision. I've never seen these guys live but I can just picture the pit going nuts for these guys while the fans in front of the stage are pumping their fists and singing along with Ensign's classic hardcore anthems. This band has been thru a shitload of line up changes since there inception in 1995 but it seems to me that they have come out of it with a winning line up.

Along with satisfying your hunger for classic hardcore sing-alongs these guys also show some creativity on this record and break out of the traditional mold to show their distinctive style on songs like "Grasping At Straws" and "Black Clouds Vs. Silver Linings" and I really dig the cool intro on "Slow Burn". These guys have toured with the likes of Good Riddance and Sick Of It All and gigged with many hardcore & punk bands such as A.F.I., H2O, Avail & Suicide Machines. These guys definitely hold their own with the best of 'em and when their new record "The Price Of Progression" hits the shelves on April 17 I highly suggest you pick it up.

How The Supersuckers Became the Greatest…