How The Supersuckers Became the Greatest… 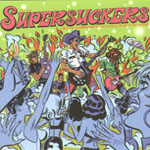 ...Rock and Roll Band in the World

Through numerous record label changes, The Supersuckers have amassed a number of rock and roll punk nuggets that shine brightly on this best of collection released by Subpop; twenty-seven to be exact. In accordance with Subpop's "Anthology" series of CD's, this collection showcases genuine punk rock ditties which always bring Supersucker pleasure to their live audience. And of course there's the bonus of two new songs "Givin' It Away" and "Beat to Shit". But wait, that's not all....two rare tracks also appear from the OG days in Arizona and the cut "Before They Make Me Run" features country rock-dude Steve Earle. And if that wasn't enough, the hard to find rendition of Ice Cube's "Dead Homiez" and a reworking of a Willie Nelson original, which features Mr. Nelson, should place you in Supersucker nirvana.

The Price of Progression