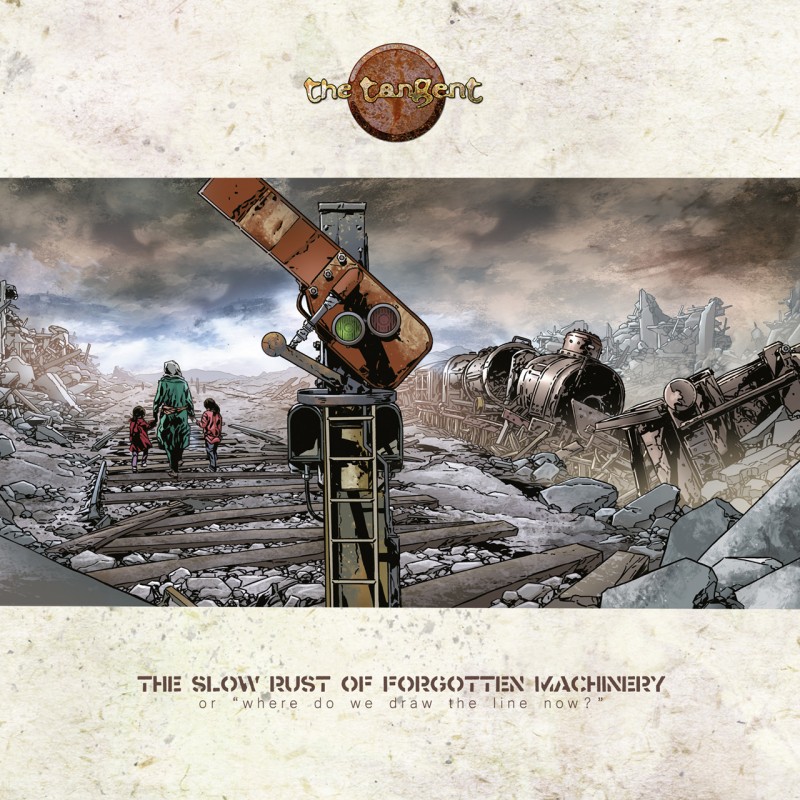 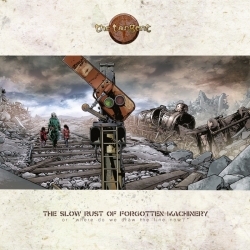 Album Review
The Tangent
Label: Inside Out Music
Reviewed by Jordan Blum

The Slow Rust of Forgotten Machinery is an excellent example of how imaginative, go-getting, and enthralling the symphonic side of progressive rock can be.

Ever since its first LP, 2003’s The Music that Died Alone, English troupe The Tangent has been one of the leading forces in modern progressive rock. Initially conceived as a solo project for keyboardist/vocalist Andy Tillison (much like the main outfit of co-founder Roine Stolt, The Flower Kings), the group has since created nearly a dozen studio records that, despite fluctuating line-ups around Tillison’s direction, maintain a wonderful aesthetic of symphonic colorfulness, welcoming involvedness, and biting humor and social commentary. It’s no surprise, then, that the band’s latest opus, The Slow Rust of Forgotten Machinery, once again packs a staggering instrumental, melodic, and lyrical punch, making it one of the year’s best genre releases thus far and a fine follow-up to 2015’s A Spark in the Aether.

Aiding Tillison (who provides drums as well this time) are bassist Jonas Reingold, guitarist/vocalist Luke Machin (Machine), flutist/saxophonist Theo Travis, and vocalist Marie-Eve de Gaultier. Citing it as The Tangent’s “furthest reaching, most ambitious and genuinely heartfelt album” yet, Tillison maintains his belief that progressive rock can be “a real-life movement in today's world.” As such, The Slow Rust of Forgotten Machinery, like previous works, is fueled by modern day criticisms; specifically, it “focus[es] on the horrendous plight of refugees from war torn parts of the world . . . the way[s] in which they are treated by the West, and in particular, by the tabloid press.” It also “laments the new trend in building walls and defending borders across the world yet takes time to look at the breakup of friendships and other more personal issues—along with a song about the fate of wildlife in the modern consumer world.” Fortunately, these overt ponderings rarely, if ever, overshadow the tunes; rather, they elevate the gravity and relatability of already engrossing compositions.

Like many full-lengths in the field, this one contains only a handful of lengthy tracks, kicking off with the sublime “Two Rope Swings.” Tillison sings gently over warm piano chords—as if he’s reciting an old fable—before backing vocals, flutes, and faint percussion, bass, and acoustic guitar passages join in. It’s a very calming way to start, lulling listeners in with a comforting and classy slice of organic instrumentation. Of course, it gathers steam as it goes, with quicker playing and a forceful new element—keyboards—making it very lively by the end. Tillison adds interesting fills between his conversational decrees (“And we think Africa is like some fairyland / Like in the picture books we read when we played on the swings . . . But drop a pin in the map! You'll likely find / An abandoned gas station and a disused mine”), ultimately leading to duel of solos between him and Machin. Afterward, the piece wisely scales back as it concludes, reprising the sparse serenity with which it began and effectively enticing for what’s to come.

“Doctor Livingston (I Presume)” is a hypnotic beast lead by a short but sweet central riff. Machin dominates with fiery playing at first, but Tillison moves around him with plenty of vigor, as do the syncopation and bass patterns. There’s a bit of playful jazziness about one-third in, with tasteful piano motifs colliding with fun rhythmic changes and more flute flourishes. As with most intricate instrumentals, the real magic of this one is how it toys with complexity and intensity while consistently moving back to its main hook; there are even sounds of nature thrown in to add a bit of emotion and charm.

The lengthiest composition here (at over twenty-two minutes in length and broken into several parts), “Slow Rust” starts with Tillison and de Gaultier singing together over mournful keyboard swirls and acoustic guitar strums. It gets more powerful as it goes, of course, with Tillison eventually issuing concerns about refugees and the media like an incensed storyteller—“But the boats still come with all the woe / The beaten faces we've come to know / Like incidental characters in a weekend hospital show / Theirs is the story! / But that story isn't ours to even begin to know!”—while the chorus reappears to keep the deviations grounded. Halfway through, the score becomes more chaotic and buoyant, evoking the bouncy vibrancy and sophistication of bands like Phideaux, Kaipa, Beardfish, and Manning. In addition, Tillison lays into the 2016 presidential election with a deep voice and scathing observations about “binary choices” before referencing Grandmaster Flash by deciding that “It’s like a jungle / Sometimes it makes me wonder how I keep from going under.” An acoustic passage follows and provides a very tranquil change of pace prior to the resurgence of flashy madness and the reprise of the initial chorus and theme, which helps bring the piece full circle and make it feel more epic. Although it can seem a bit tedious at times, there’s no denying how well organized and written “Slow Rust” is from both a musical and lyrical standpoint.

Fortunately, the same can be said for “The Sad Story of Lead and Astatine.” It begins as a vintage and stylish cultural and personal reflection that you might hear in a jazz piano bar, with clean guitarwork, flashy sax treatments, and shuffling drumming assisting in the duet. Soon after, a majestic break (during which flutes and bass lines soar while chimes decorate intersecting guitar decorations like a lost Mahavishnu Orchestra jam) gives way to a feisty drum solo. From there, the track returns home with additional solos and embellishments, yielding quite an energetic finisher.

“A Few Steps Down the Wrong Road” closes The Slow Rust of Forgotten Machinery with more politically-charged narration about nationalism and world dominance. Tillison sounds like a true historian in his matter-of-fact speech, which is followed by an explosion of riffs, sax, piano, and percussion. Of particular note is the section in which his lead outcries are matched with rich backing counterpoints about flying flags for “For our children / For our national pride / For our Glorious Dead / For our fathers”; in fact, it’s likely the highlight of the entire album (at least in terms of vocals). As it proceeds, more biting political statements are issued—“And it's all ours! / And we don't wanna share it! / It's all ours / And we're taking it back!”—alongside strikingly robust and moving arrangements; despite clear differences in many ways, it actually resembles Marillion’s latest LP, F E A R, in its balance of social commentary and affective instrumentation. It’s precisely this merger of feeling, technique, and brash experimentation (especially with Tillison’s varied vocal types) that makes The Tangent so remarkable.

Tillison and company have nailed it once again with The Slow Rust of Forgotten Machinery. Arguably their most focused, ordered, and captivating entry yet, it’s an excellent example of how imaginative, go-getting, and enthralling the symphonic side of progressive rock can be. The musicianship is inventive and appealing throughout, astutely transitioning between delicate and multifaceted moments with seamless poise. Meanwhile, Tillison continues to know where his strengths and weaknesses are as a singer, choosing appropriate ranges and melodies to suit his charismatic tone and add plenty of personality to the landscape. Although there are comparable peers in the style (some of whom I’ve already mentioned), The Tangent remains on a singular path.