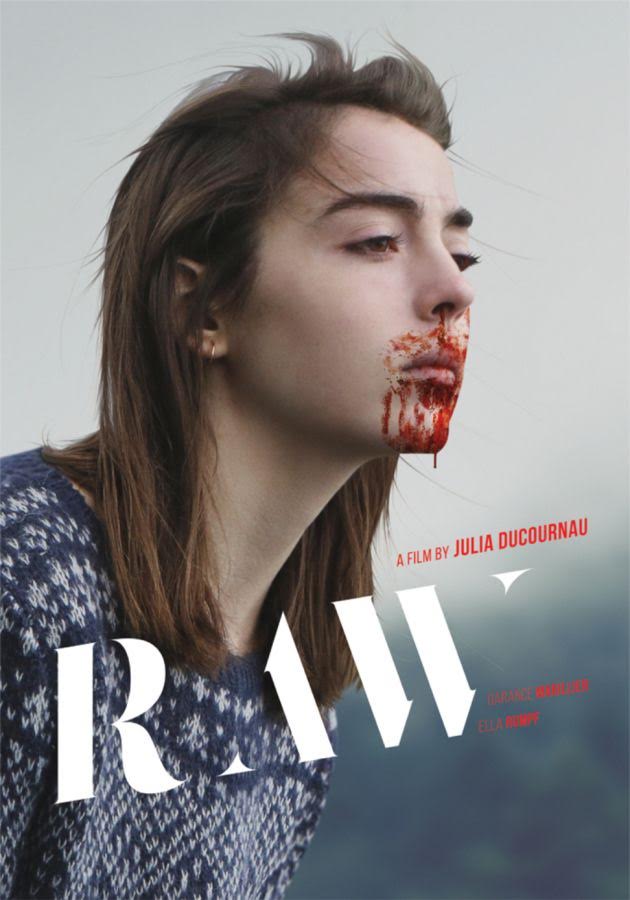 All too often do horror films rely on jump scares or dash past the line of exploitative and trail behind the weight and worth of substance. Director Julia Ducournau’s debut film Raw succeeds in maintaining a balance between elements of vivid and visceral body horror as well as a coming of age drama rich with symbolism. Upon arriving at veterinarian school, freshman Justine (Garance Marillier) is immediately forced into hazing rituals, submissive to the elder students and immersed in a heavy party and drinking culture. After being splattered with animal blood and consuming a rabbit’s kidney, Justine begins to develop an intense reaction to her newfound carnivorous diet. Body rashes, nervous tics and a deep desire to devour flesh are only some of the symptoms she exhibits in addition to navigating her way through her budding sexuality and the surrounding imminent peer pressure. As her obsession for (human) meat consumes her, Justine discovers through her continuous bonding and rivalry with her older sister, Alexia (Ella Rumpf), that she’s not the only one with cannibalistic tendencies in the family.

In consideration of the deeply embedded rites of passage teenagers succumb to in order to gain approval, Ducournau highlights the inevitable loss of innocence at this stage of life with a darker and primal twist on female sensuality. Sheltered by her parents from engaging in sexual promiscuity and remaining a vegetarian her entire life, Justine’s simultaneous savage and sexual appetite is whet and remains insatiable after her university mistakenly assigning her a (pronounced gay) male roommate, Adrien (Rabah Naït Oufella), who she develops a deep rooted desire towards. Her love and affection towards her sister as someone to look up to and seek guidance in uncharted debauched territory is frequently fragmented and full of complexities as jealousy and sibling rivalry pervade when garnering the attention of Adrien and handling the emotional and physical stages of late feminine adolescence that Alexia has seemingly mastered.

Distortions of body image remain rife throughout Raw; Justine’s preoccupation with the desire to consume flesh is coupled with guilt, followed by immeasurable pleasure once partaking in blood-drenched meals, only to have the cycle repeat over and over again. The other students on campus fail to understand the nature of her cravings, as one girl sharing a restroom with her succinctly adds that using a finger will make her disclosed purging easier.

Ducournau’s use of color in Raw highlights the subtle but constant tension throughout the film with the use of red washed walls in the dormitory hallways, pristine white lab coats that the students wear, inevitably smeared and caked with animal blood, and yellow and blue paint covering Justine and a random male stranger after a forced Seven Minutes in Heaven-esque dare in a closet eventually smearing on their bodies as an identical green.

While Raw’s gory effects are stunning and blunt, they never take away from the psychological sexual curiosity and anguish that Justine gravitates towards. In a similar vein of John Fawcett’s Ginger Snaps meets Myroslav Slaboshpytskyi’s The Tribe, albeit with more (literal) meat to chew on, Raw distinguishes itself as an intelligent coming of age film coupled with a feminist lens and a ferocious bite to it.