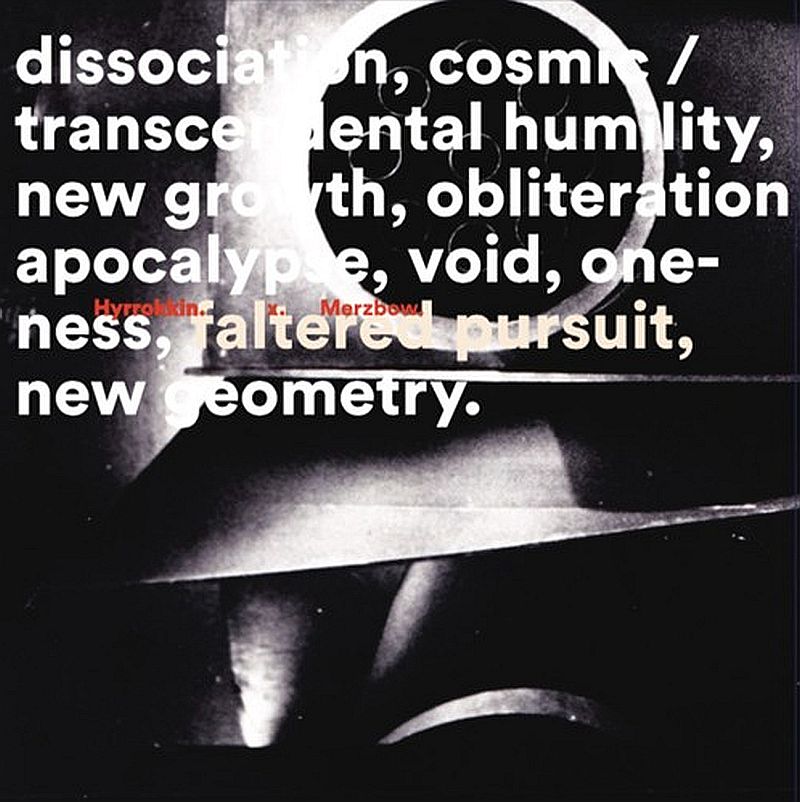 Faltered Pursuit is anything but what its title describes. The new album that arrives today via Brooklyn-based label Sleeping Giant Glossolalia is a successful amalgam of noise, rock, and rhythm that batters the senses.

The LP is a collaboration between Japanese noise legend Merzbow (AKA Masami Akita) and Ohio-located experimental rock band Hyrrokkin.

Faltered Pursuit is actually the last output of Hyrrokkin, who officially disbanded in 2014.

The album is only 3 songs long, but each one is a lengthy tract of instrumental intensity, dynamics, and textures that encompasses noise, rock, avant-metal, and progressive music. And there is the occasional desperate human shout in the chaos as well…

Some might say the sonics are challenging, but things that are complex and exploratory have their rewards.

In this case it’s the breaking of genre boundaries and blowing the mind with the pummeling beats and unrelenting noise on opus and lead single “Spatially Raised, from Seed to Volatility,” the restlessly whirling dread and displacement of “The new economy “seemed” suddenly to dissipate overnight,” and a staticky, thumping, and clanging “Let’s All Dance In A Rigorous Line” that was remixed by composer Rob Mazurek.

The foundation of each track was composed by Merzbow, who then passed them along to Hyrrokkin to create new compositions. The songs were then mixed by Jason LaFarge (Swans, Nastie Band) at Seizures Palace in Brooklyn and mastered by James Plotkin (Sunn 0))), Gnaw).

Hyrrokkin guitarist Ed Ricart, who is currently in the avant-rock outfit Monotrope, divulges details about how the record came to be, revealing, “Once we had Merzbow's tracks, the process started with a bunch of listening. I wrote down the time code wherever I saw a good opportunity for us to respond to what he was doing. I found some key pitches that worked within these various sections I mapped out.

I assigned a numerical value to each of the pitches. I used a random number generator to output sequences, and we used those sequences to determine the order of the pitches I'd selected, and made a bunch of different tone rows that way. I made a giant matrix of these various sequences.

I wanted to pay homage to Merzbow's process, giving some control over to the computer, to allow it to influence my own compositional choices. It was fun to approach the composition process as sort of a nod to the genesis of electronic music, serialism, Stockhausen, etc.”

The collaborative angle of this LP that was formed back in 2013 doesn’t stop there. Hyrrokkin recorded it with engineer Bill Skibbe (Protomartyr, Fucked Up, Jack White) at Key Club Recording in Benton Harbor, Michigan, and contributors include Jerry Busher of Fugazi and All Scars on additional drums and percussion, Chuck Bettis of Meta-Matics, All Scars, and Mossenekon recorded vocals and additional electronics, and NYC-based improvisational musician Andrea Parkins on amplified accordion and electronics.

Take a look at the eye-opening music video for “Spatially Raised, from Seed to Volatility”: