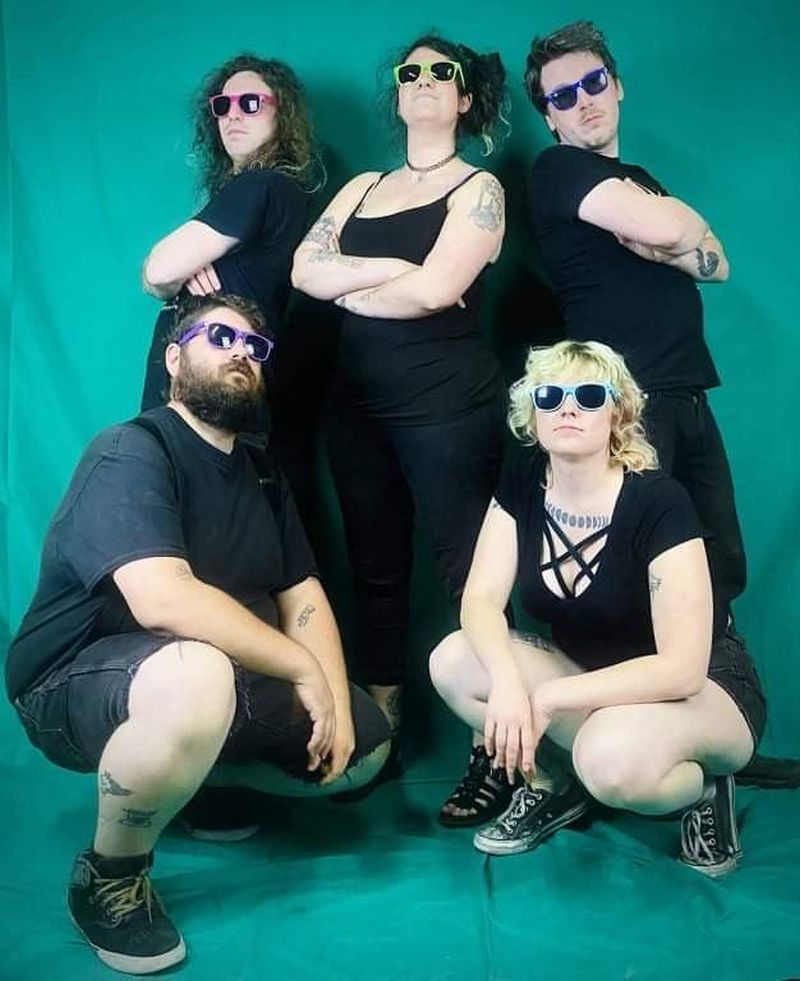 While all of Doom Scroll’s members are seasoned touring musicians, the pandemic has brought a halt to live shows for the (very long) moment.

They switched gears and created and recorded the socio-politically relevant Immoral Compass during these turbulent and uncertain days, bringing their self-described “aggressive, melodic punk/crust wave” sound to a virtual audience.

Rebel Noise is stoked to host the premiere of the album in full today, on the day of its release.

Immersed in punk, crust, alternative folk, ska, and thrashgrass, the outfit’s tuneful music is filled with complex compositions and layers of sing-along harmonies. The hope is that after Doom Scroll’s LP roll-out they’ll soon be playing in an area near you.

Passionate vocals, astute lyrics, and tight musicianship are all hallmarks of each number, from the heartfelt and compelling strummer that is the title track, to the catchy and percussively thrumming “When Will I Disappear,” spirited and speedy ska-tinged “Silver Lining,” and broodingly reflective hybrid spoken word/anthem “The Drive Home.”

Immoral Compass was recorded at Shady Nook Studios by Lozier and was mixed and mastered by Adam Tucker at Signaturetone Recording.

All songs were written by Lozier, with the exception of LP-ender “The Drive Home” which was a co-write between Lozier and Taylor.

Lozier also provided a lion’s share of the instrumentation (mandolin, guitar, bass, banjo, cello, piano, percussion), while Taylor supplied the washboard, baritone uke, and percussion, and everyone pitched in on vocals, including a guest appearance on vocals for “Silver Lining” from Jesse Sendejas of Days N Daze.

Lozier digs into the deep details of the record, revealing, “Immoral Compass revolves around aspects of oppression, hatred, murder, and overcoming personal hardships. The over-arching theme of the album in a nutshell is that we all live our lives, but rarely take into account other peoples’ lives.”

“If something isn’t affecting us directly, we tend to give it little to no attention. From here sometimes spawns the start of inconvenience, accusations, and just flat-out hatred for not seeing things through the eyes of another human and the life they live.”

“We aren’t better than each other, but this day and age has brought about this mentality versus working together to better the world around us.”

“I purposely wrote this album to be fast and aggressive while still maintaining a melodic folk sound. I feel like a lot of folk punk these days gets a bad rap because it gets lumped into people who are just starting out playing music versus people who have been playing for years.”

“Someone will hear a folk punk “sound” and immediately hate it because of the negative connotations that are attached to the genre.”

“I wanted to break out of that pitfall and write within the genre something complex, with different time signatures, changing tempos, impressive instrumentation, and harmonies that wouldn’t easily be steered away. I wanted to write something that shows the 19 years I’ve been playing and writing music.”

“I recorded the album with Taylor during quarantine. I hadn’t planned on writing this album at all. In fact, we were supposed to start a different band altogether, but this panned out way quicker and in my opinion sounds way more unique.”

“I wrote all of the songs and recorded all of the instruments on the record except for washboard. There’s no way in hell I could play washboard the way Taylor does. Fingers of fire. Taylor helped write the final track, “The Drive Home.” That was probably the most emotional song besides the title track that came out of the album.”

“We were both in awe of the actions of the world at the time and that naturally drew out the creative writing process. When you feel strongly about something, it’s not work at that point, it just kind of pours out of you.”

“I later wanted to build a band and I wasn’t entirely sure how to do that while in quarantine. I went down to Texas in December 2020 to record the new Escape from the Zoo record and while I was there I showed Marissa the Doom Scroll songs. They immediately wanted to be a part of it and that kind of started the assembly of the band.”

“From there, I met P[izarro] from cross acquaintances. And after that we needed one more member to fill out the sound and Marissa told me Micah would be into playing.”

“To finalize the album, they all recorded vocals for it and really helped flesh out the final sound. Thus the current lineup was born and we’re all very stoked on this band and getting out and touring as much as possible!”

Song Premiere: “You Got Lucky” by Red Spot Rhythm Section

The Heat Inc. crank up the thermostat on fiery rock ‘n’ roll EP