Album Premiere: No Prēyers by The Electric West 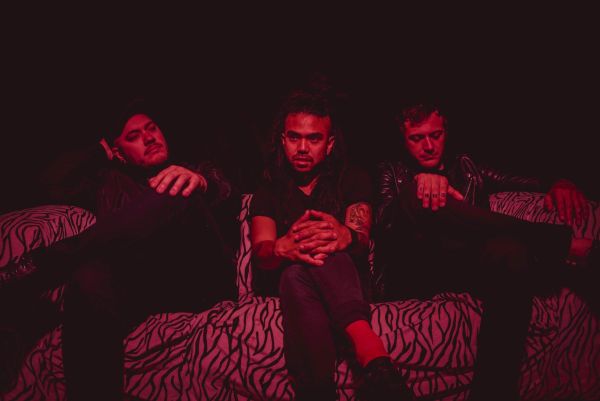 Los Angeles-located DIY post-punk/darkwave band The Electric West are bowing their powerful and thrilling debut album, and first ever concept record, No Prēyers, August 6th, with a special release show scheduled at The Resident in downtown LA.

No Prēyers consists of ten uncompromising tracks that explore the meaning of the word “no”, a strong indictment of the current negative and evil environment of misogyny, rape culture, and white supremacy in the US.

Shrouded in a brooding atmosphere, but crackling with dynamic rhythms and defiant energy, each track sharply fuses various facets of post-punk, darkwave, New Wave, dance-rock, and death punk into a potent and stirring LP.

The Electric West was formed in Echo Park, California in 2013 by Lee Lewallen (bass) and Byron Pagdilao (drums), with the assistance of their friends.  They self-released an 8-song demo with accompanying DVD, and when that quickly sold out, Lewallen and Pagdilao toured furiously with musician D. Fuzz added to the live line-up.

SXSW performances in Austin, Texas and through the West Coast solidified The Electric West’s name and their vibrant shows. Debut EP Verdugo was soon released on tape via Future Force Records, and was eventually put out in fast-selling vinyl format.

Last year long-time producer and engineer Joseph Calleiro joined the band on guitar and the trio started recording their debut full-length, with the electrifying results being streamed here at Rebel Noise in their entirety.

Bass guitarist Lewallen explains, “Our new concept album, No Prēyers, is based on going forward and backwards for eternity. Existence seems to be mostly binary, where for every “Yes” there’s a “No” and behind every good, there’s an evil, or something like that. Every time something good happens, the bad follows. Some of our songs are symbolically based on current events and I think a really fun part of the album is listening and connecting the dots. We jab at everything from dealing with prēdators in our music scene to confronting misogyny to more fun things like science fiction and cartoons. Yeah, it might be painted in a black ink on a black trash bag, but there’s some humor in some of this album. We’re proud to call it our own and hope you think of us every time you hear the word... “No.”

So, put on your blood red shoes and dance the bruising black and blues to the ten striking tunes on No Prēyers.

The independently released No Prēyers is available now on all digital platforms, including Apple Music, Spotify, and Bandcamp.