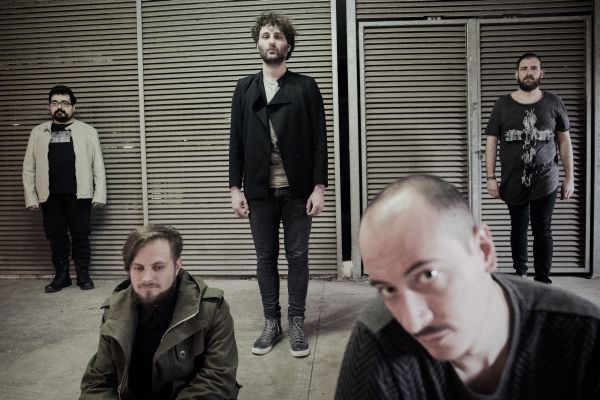 Tomorrow, February 14th,  brings the release of the long-awaited Santa Sangre album from Japan Suicide via Unknown Pleasures Records. Ironically timed to coincide with Valentine’s Day, this is a dark, moody post-punk offering that is more likely to rip your heart out than fill it with love.

Based in Italy, Japan Suicide counts such bands as Bauhaus, Siouxsie and the Banshees, Yeah Yeah Yeahs, and, yes, Japan among their influences, as well as The Damned, Interpol, Suicide, CSI, CCCP, and Massimo Volume.

The album was heralded with the release of the lead track “Circle”, together with a strange video like an adult kickback to Lord of the Flies. Produced and directed by Francesco Brunotti, it turns out that the lyrics to this track were actually inspired by Dave Eggers' novel The Circle.

About the Santa Sangre album on the whole, if you think you might find a dull moment here, or one that lapses by unnoticed as you catch your breath while jumping from an up-tempo track to a wall of noise, you are mistaken. This LP best suits those with a strong heart because you’re about to get injected with a huge dose of sonic adrenaline upon listening to it.

"We have finally produced our new album Santa Sangre, which was inspired by Alejandro Jodorowsky's movie and Roberto Bolaño's novel 2666, all the while moving from echoes of British post-punk to a sound replete with more psychedelic and shoegaze textures," says Stefano Bellerba.

"This is a delicate, but necessary step for us: we tried to match the quality of our previous album, We Die in Such a Place, while also adding new sounds from our past work in order to achieve a condensed powerful opera and, at the same time, a sound that is capable of achieving different listening levels,” Bellerba concludes.

In 2017, the band release their single “This Be The Verse” as part of the Darkitalia compilation Sparkles in the Dark vol 4, which also featured The Soft Moon and numerous other celebrated and emerging artists. Two years prior, they released We Die In Such a Place and, in 2016, they issued their 1978 EP, again through Darkitalia.

While Japan Suicide has performed many gigs across Europe, in May of this year they will venture to North America for their first USA/Mexico tour.

The Santa Sangre album will be released on February 14, 2018 via Unknown Pleasures Records and the band expects to release a separate vinyl edition later on with some additional tracks.

We think you’ll also dig their recently released single “This Be The Verse” (via The Blog That Celebrates Itself Records), so enjoy their latest video here: