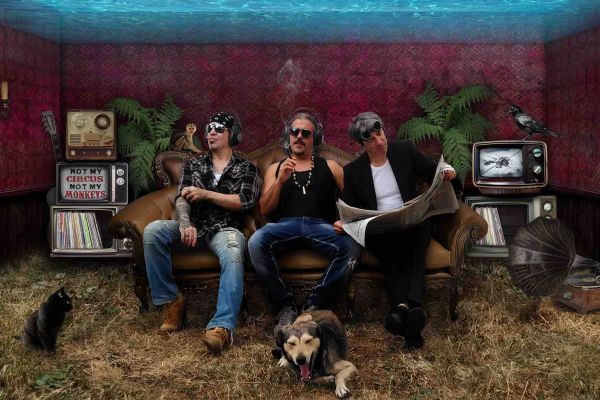 If you like your music polished, sterile, and squeaky clean from out of the studio, you should divert from this article right now. But if you like music with grit and drive and don’t mind it being a little dirty, we’ll gladly introduce you to Moonshine Booze. Their single “The Place” precedes their 14-track debut album Desert Road, slated for release in mid-March. The band joins the sizeable roster of Italian indie super-label Seahorse Recordings.

Formed in the summer of 2014 in Teramo, Italy, Moonshine Booze is a trio – Andrea Manila (vocals), Emiliano Zapata (guitar), and Fabio Manchos (drums). Their music is unique for Italy and even internationally, dishing up a mix of desert rock with bluesy influences. On “The Place” in particular, the beat/pacing is reminiscent of The Strokes and early Blur, but the vocals and guitar solo totally head in a different direction, their sound being closer to Terrorvision or Black Eyed Snakes.

This music is catchy and fun – the kind of music that makes you want to dance, but also drink. Sounds like some rockin’ sounds for some good alcoholic fun. The lo-key vocals seem to be such on purpose, making you reach in to listen just a bit more than you might otherwise. Plus the video is brilliant, filmed in black n’ white vaudeville style, calling to mind films of the pre-talkies era.

While the band initially played live quite a lot and intended to focus on performing covers from Johnny Cash to Robert Johnson, Muddy Waters, Little Walter, and J.B. Leinor, but completely rearranging them with raw and catchy roots, they eventually realized their own unique qualities and style.

The band ultimately locked themselves in the studio for three months in order to write, record, and complete original material. The result is their debut 'Desert Road' album, which was composed under the influence of The Who, Johnny Cash, The Rolling Stones, Tom Waits, The Kinks, and ZZ Top.

Desert Road will be available across digital stores and streaming platforms on March 16th, but can already be pre-ordered via Seahorse Recordings' Bandcamp.