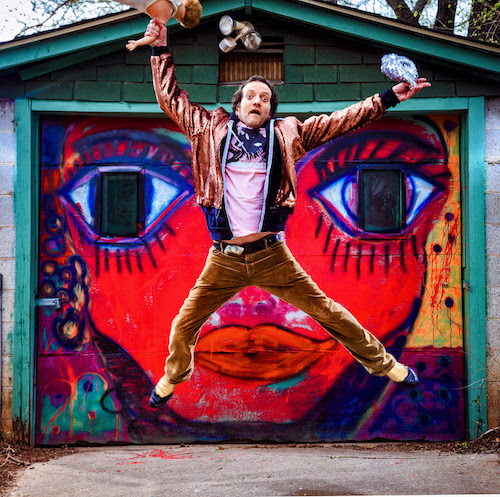 Alt-rock godfather and Chainsaw Kittens frontman Tyson Meade has released his new record Robbing The Nuclear Family via Shaking Shanghai. The creative zeal that established Meade as an iconic leader of the alternative rock movement is inescapable throughout the album, and the 10 tracks that make up Robbing The Nuclear Family draw widely from his signature mix of punk energy, vivid arrangements, and politically charged lyrics. The album is currently available for purchase HERE.

Robbing The Nuclear Family has been acclaimed by Brooklyn Vegan, and Popmatters who writes that it "reminds us of Meade's ability to weave the unusual into the familiar and create musical settings that are as forward-looking now as they were when he began his recording career in the 1980s."

Through the years, Meade—and his legendary three-octave voice—has toured with Iggy Pop, Smashing Pumpkins, Jane’s Addiction, the Meat Puppets, and many others. Brooklyn Vegan wrote in 2014 that “Tyson Meade has fronted not one but two influential bands. In the '80s he fronted cult band Defenestration (Kurt Cobain counted them as an influence on Nirvana), and got more attention in the '90s with the glammy Chainsaw Kittens (Iggy Pop and Smashing Pumpkins were fans).” The group predated and outlasted the other 1990s alternative rock acts with its energetic blend of glam-damaged energy, theatrical extremity, and punk rock basics. As Popmatters previously observed, "But whereas in Defenestration it was all tempered with a vaguely mainstream rock sensibility... the Chainsaw Kittens dove enthusiastically off the deep end, into the extreme waters of glam-pop-punk, full-on transvestitism, and for the first time, openly gay lyrics."