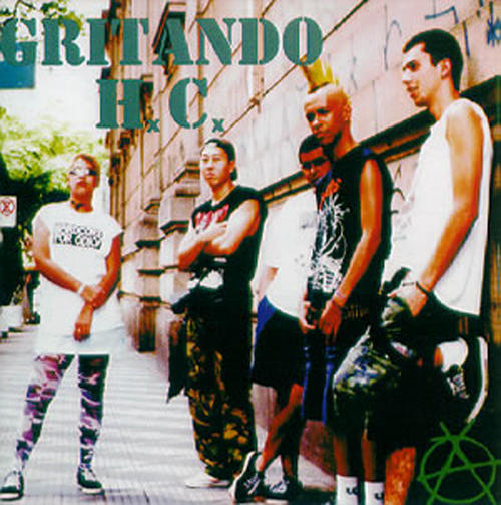 It was the early 90s in a punk bar in the city center of Sao Paulo, Brazil where we first met. At that time many of the bands that influenced us in the 80s no longer played and we had recently come out of a dictatorship here in Brazil. It was all very new, the struggle for freedom of expression and also the coming of violence that emerged from the epoch of the gangs. The shows always ended in confusion and with it the '80s bands were losing ground. There remained many gangs and little choice of live shows and difficult epoch here.

Sensing this lack of choice in live shows and lack of willingness from the bands to express themselves we decided to make a run at doing it for ourselves. Taking the true DIY principles to heart we set out to create Screaming HC.
Basically all members who have been through the band had friendship links in common, and that's how we recorded the first album Screaming HC # 001 1994.

Here's what Lee had to say when I asked how she would describe her music to someone outside of the punk/hardcore scene, "Here in Brazil When a song not known popularly has a heavier rhythm is all classified as crazy rock."

I usually get my music online these days but if you want to find CDs in São Paulo you go to the Rock Gallery. They have a wide variety of items from Punk rock-HC until classic rock and there are many shops here.

I go to places where I identify like the squares where I can skateboard and in São Paulo almost every week has shows with bands I like and when possible I will honor to meet old friends and exchange some ideas.

I would first of all thank John Brunker for this interview by Rebel Noise leave a big hug to everyone who had access to this interview wish peace for all and defend a more just world for all.

There are many band videos on youtube for those who want to know more about us and our contact in the pages :