Chicago Teachers Showed The Country What True Progress Looks Like 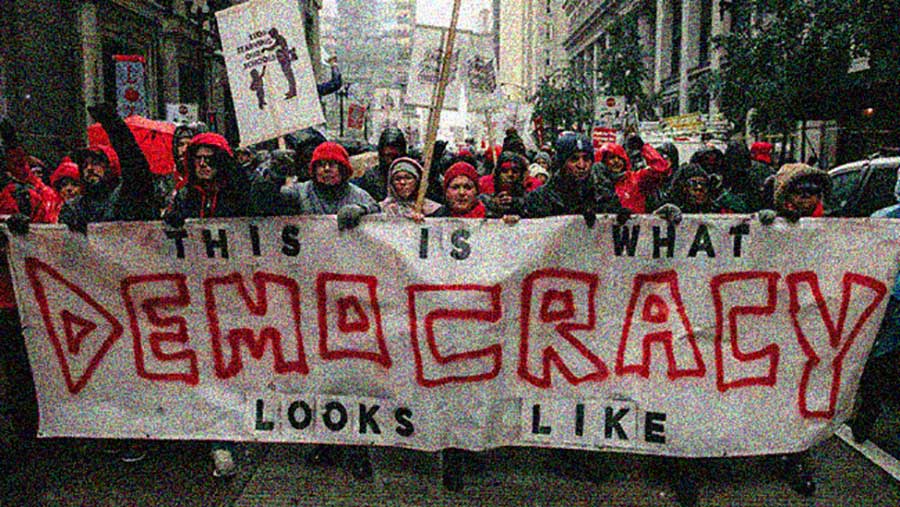 Friday, the teachers of Chicago went back to work. Finally. In what felt like a negotiation process that moved with the excitement of fragments of broken glass straight into the meat of the finger, the Chicago Teachers Union strike only grew more complicated the more it was put under the social microscope. What the teachers of Chicago want isn’t indicative of their own wanton needs, but instead shines a light on the fractures within our cities that most people do absolutely nothing to solve.

While it’s nice to bemoan political structure or drop a few coins in a bucket, it takes real action to make a change. The Chicago Teachers' Union called a mayor’s bluff and met her head-on. Despite nearly two weeks of ugliness, the situation was resolved. But it wasn’t a walk in the park.

Chicago is a traditionally working-class, left-leaning with common sense city. While not all of the progressive agenda finds a place within the city’s borders, the Chicago Teachers Union broke through in a big way for the kids of the future, even if they had to compromise a few days of class right now.

Chicago has become a trendsetter for the future of what empowering teachers resembles.

That’s not to say there haven’t been a few politically charged stumbling blocks, either.

What we’re left with these days out is a picture that’s becoming the time-tested theory of plausible reality: where does the teacher’s union find it’s perfect compromise while the city feels it’s getting the most bang for its buck? 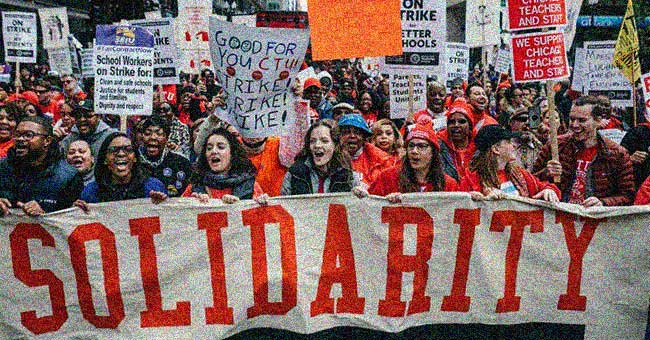 With a tentative agreement in place, the teachers headed back to their classrooms, and the kids got back to school. The strike drew fire from all sides, with some complaining about the teachers asking for too much, while the other side of the fence didn’t feel like the teachers were given enough.

Here’s the thing: when you create an argument of “getting too much” out of educators, the situation itself is toxic. There was a laundry list of demands educators wanted, but at the core of the strike were a few crucial points:

Mayor Lori Lightfoot ran on a campaign of “teachers first,” which promised to invest in Chicago’s crippled school system. And now, when called out for her clear blind spots, Lightfoot was to be combative throughout the negotiations. Even if you’re a tried and true liberal as most of Chicago is, there comes a time when the machine’s crushing wheels have to be taken off – which was precisely what Lightfoot was elected as a champion of this movement. To have her back out would be accepting business as usual. Lightfoot had pledged to add social workers, case managers, and nurses at schools during her campaign. 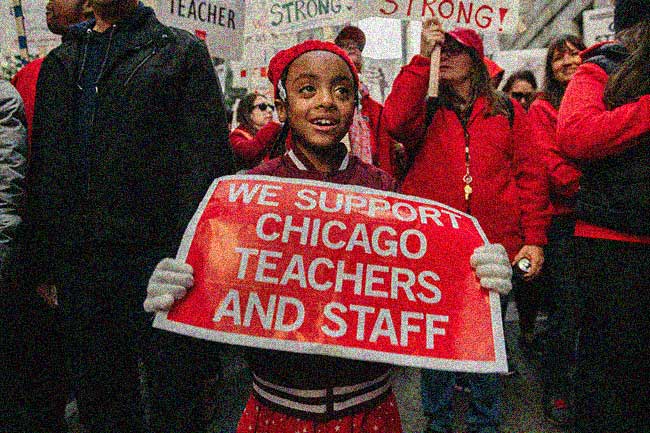 The teachers asked for a simple pledge: put it in writing. Like all politicians, Lightfoot didn’t sign on the dotted line.

Chicago cannot afford any other cultural losses. The population is shrinking, the infrastructure is a bloated mess, the state is broke, and Chicago isn’t sitting at the foot of a boom, but instead, it’s merely keeping up with the jones in terms of staying afloat.

The newest sticking point isn’t what the teachers are getting, it’s how much time has been spent on this strike and that kids aren’t getting their hours in. Someone has to pay for that, and the teachers on the picket line are the ones to take the loss on the chin.

It’s widely documented that Chicago has an issue with violence, poverty, and classist racism. If you’re in denial, all you have to look toward is the public school system, where some classrooms are closed due to a shortage of teachers, or a lack of funding. In many poor neighborhoods, a school is the one beacon of hope for many to better their lives, but yet, the taxpayer still complains about the cultural investment, shrugging their shoulders in the future. If people in the city ever want to see vibrancy come back to Chicago, it has to be homegrown, not some shipped in concept ala the White Sox or Cubs shopping for a new free agent. All of this starts with supporting teachers, the people who work in schools and investing in the kids who could make Chicago a city of the future. A quarter of a million students are in Chicago’s system, which over 25,000 teachers and staff taking a stand against long hours and demanding Lightfoot and others in city hall invest in the children, not fatten anyone’s wallets to the point of Jules in Pulp Fiction. 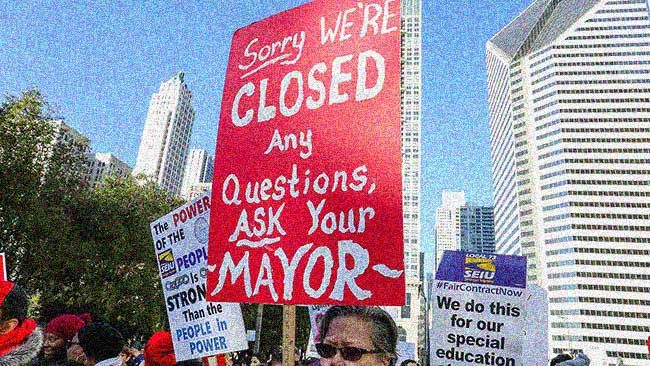 It’s worth mentioning the Chicago Public School only has teachers work 190 days a year, which also includes conference days, along with professional development. They also get eight days paid off, along with a summer break and other breaks included. Some papers like the Chicago Sun-Times are attacking the union for the length of the work a teacher puts in, which again, is problematic. A teacher’s job isn’t like punching a clock or swinging a hammer.

The thing is, most people don’t understand the grind of an educator. While most of us can roll into work and put a few extra hours on a project or start at nine am, the average teacher is putting in those hours they’re getting back during the summer. A lot of those hours are with kids who need help and need a lifeline. That’s emotionally exhausting.

One of the most significant and genuinely progressive points of the strike is that teachers wanted more than a raise – they wanted affordable housing for students and teachers.

Chicago public schools are the primary driver for needy students. Most parents with a few bucks to spare typically send their kids to private schools or move to the suburbs. The schools are segregated, and Chicago schools have fewer teachers and resources. The union was fed up with the constant uphill battle, so they took action. 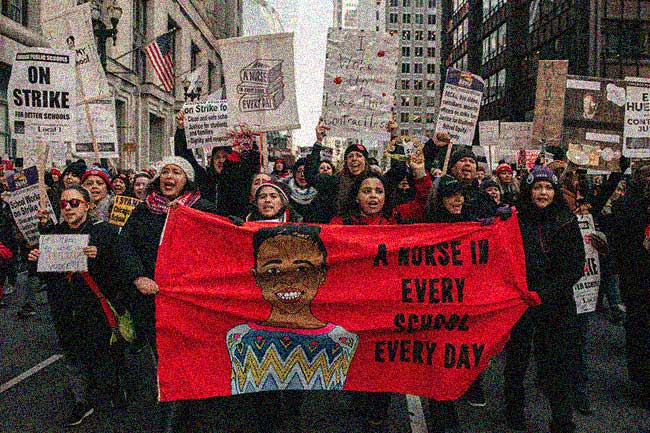 “We have tried to provide the best deal that’s fiscally responsible, fair to teachers, and fair to taxpayers,” Mayor Lori Lightfoot said in a press conference Wednesday, expressing it was the best offer in the teacher’s union’s history. The Chicago Public School annual budget was slated at $7.7 billion dollars. Still, the union felt that number wasn’t serving the hidden corners of the city away from the Gold Coast, Lincoln Park, or even some of the working class southside neighborhoods with strong aldermen who manage to get things done for their districts.

Class size matters. Resources matter. Educators have collective bargaining power thanks to the size of the union and “bargaining for the common good,” which is why teachers want affordable housing.

Because of the recent tax hikes, Chicago had cash in surplus (a stark difference in comparison to the rest of the state), and it was talked about that there would be an investment in education. The teachers wanted educators to be able to live in areas where they teach as Chicago is rapidly gentrifying neighborhoods that border some of the school zones in question. Lightfoot knows affordability is becoming a thing in the city, “Affordable housing is a critical issue that affects residents across Chicago, and everyone’s voices need to be heard during this process,” Mayor Lightfoot said in a statement. “As such, the [teachers union] collective bargaining agreement is not the appropriate place for the City to legislate its affordable housing policy.” 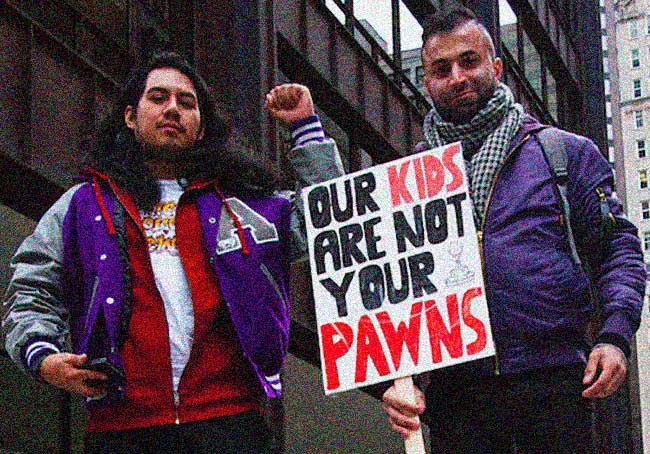 Teachers unions in places like Los Angeles and even red states like Oklahoma have banded together to fight back against broken school systems, and Chicago just put on the biggest show yet. The affordable housing measure was tabled, but at least pushed to the forefront of the conversation. The power of this strike was that the teachers of Chicago wanted the system to invest back in the kids, not to take sides against progress.

It wasn’t easy; there were a lot of tired feet, cold hands, and hours spent out on the picket line. In the end, the city of Chicago rose up to meet the challenge. The teachers got a raise that covers the next five years, the classrooms will be smaller and more manageable. Mayor Lori Lightfoot got some battle scars that will serve her well over the upcoming firefights that she’ll have to face.