Concert Review: The Dear Hunter (w/VAVÁ and The Family Crest) at Union Transfer on December 14th, 2017 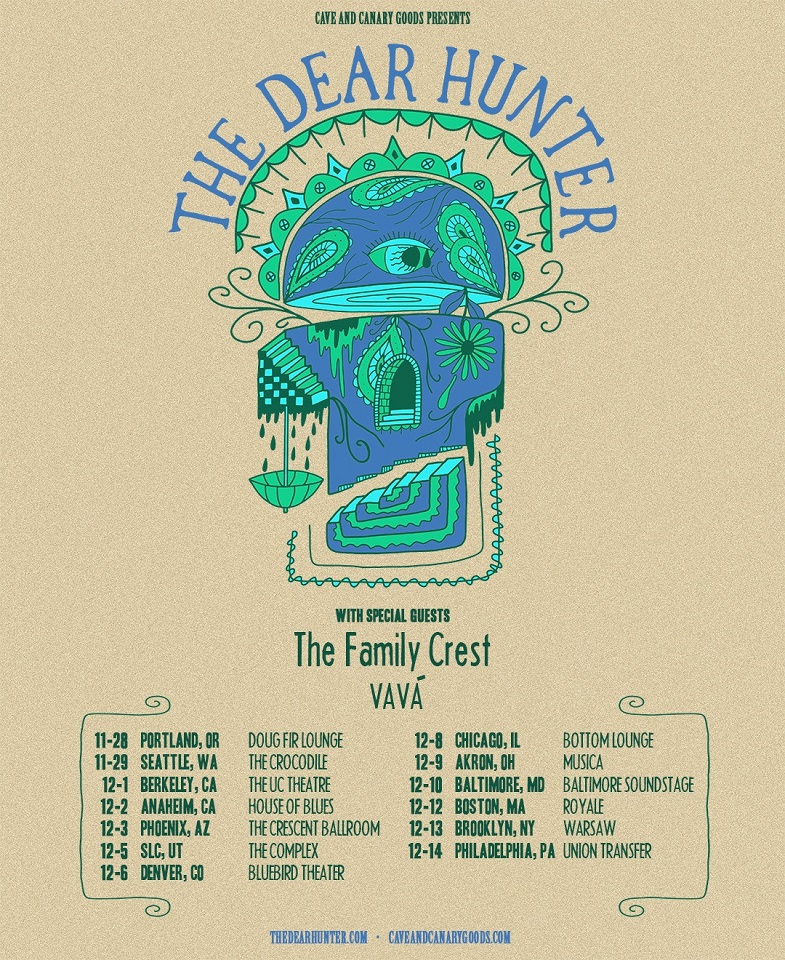 As usual, you can’t really ask for a better concert experience than seeing The Dear Hunter at Union Transfer in Philadelphia, PA.

It seems like indie/progressive/folk/orchestral rock sextet The Dear Hunter and Philly’s Union Transfer go together like two peas in a pod. After all, the band almost always plays there when they come around, and for good reason, as their blend of bombastic intricacy and heartfelt musings are housed perfectly within the venue’s atmospheric warmth, quality sound system, and friendly vibe. Unsurprisingly, they once again made for a stunning pair this past Thursday—December 14th, 2017—when The Dear Hunter headlined a show in support of their latest collection, the All Is As All Should Be EP, with opening accompaniment from VAVÁ and The Family Crest. Although not every group was equally impressive, they certainly complemented each other well, making it another superlative night of live music.

VAVÁ (the pseudonym of Los Angeles singer/songwriter/guitarist Vanessa Wheeler) took the stage alongside her bassist/producer, Francisco Ojeda, around 7:45 PM and played for about thirty minutes. She adequately describes her sound as “experimental popishness,” a mixture of distorted, shoegaze-esque collages, electronic/industrial beats, and bittersweet coffeehouse confessions in the vein of Eisley and Suzanne Vega. Naturally, she played tracks from her The Other Side collection, including the title track and “Heavy,” as well as a substantially refreshing cover of Radiohead’s gripping “All I Need.” To be honest, her songwriting and vocals seemed to take a backseat to the genre-bending hodgepodge arrangements (which were a bit too repetitive and similar to each other), but there was no denying her endearing earnestness and humility as she played, thanked the crowd for “listening to a band [they’ve] never heard of,” and confessed that she’d joined the tour because Dear Hunter mastermind Casey Crescenzo found her on Instagram.

San Francisco septet The Family Crest appeared next and blew everyone away; frankly, I don’t think I’ve ever been so instantly impressed by a group I’d previously never heard of. In a nutshell, they packed a similar baroque pop/rock vibe as The Dear Hunter (plus Lady and Bird, Emanuel and the Fear, and The Reign of Kindo), yet also included the nautical themes and/or lovesick splendor of groups like Of Monsters and Men and The Decemberists. They began with the ominous theatrics of “Beneath the Brine” before delving into the more upbeat and sparse “The World,” the brisk and encouraging “Sparks,” and the Big Band splendor of “Howl,” among other gems. Throughout their set, vocalists/instrumentalists Liam McCormick and Laura Bergmann sang with electrifying poise, which, in addition to the whirlwind of irregular timbres that steered each piece, made their performance feel immensely engaging, surprising, and quick.

Soon after The Family Crest left, The Dear Hunter came out and played an expectedly impeccable 90 minutes that, overall, felt even fiercer and more refined than their past appearances at Union Transfer. Interestingly, they only play one song from the new EP (the title track), choosing instead to highlight the fan favorite Act albums. For instance, last year’s Act V: Hymns with the Devil In Confessional received its own segment, with “The March,” “The Most Cursed of Hands,” “The Flame (is Gone),” and “Light” being played consecutively. Other highlights included Act II’s “The Lake and the River,” “Black Sandy Beaches,” and all three “Bitter Suite” parts, as well as Act IV’s “Waves” and The Color Spectrum’s “Misplaced Devotion” and “Home.” The most surprising part was definitely the inclusion of “Red Hands” (since fans speculate that Crescenzo doesn’t like playing it anymore; he may even have confirmed that at some point), and of course, the entire audience sang along with it. Also, Act IV began and ended their stint with “The Squeaky Wheel” and “King of Swords (Reversed),” respectively. Although it’s a shame that Migrant, Act I, and Act III were left out entirely, that’s understandable considering how much material The Dear Hunter has to play (and with such an astounding catalog under their belt, anything they play is a win).

As usual, their show was enhanced by an effective lighting scheme (basking them in every shade of the color spectrum—pun intended—that alternated according to the tempo and mood of the songs), plus Casey’s trademark sardonic conversations in-between selections. In particular, his banter with the crowd was typically witty and welcoming, as were his tangents about playing Chuck E. Cheese, going to the beach in winter, using cell phones to mimic disco balls, and even challenging someone in the crowd to sing on stage. These moments showcased how their amicability and humbleness matched their superlative creative and technical chops, proving once again why The Dear Hunter is one of the best modern bands around. Couple their set with the appeal of the prior ensembles—plus the general wonderfulness of Union Transfer—and you really couldn’t ask for a better concert experience.

Song Premiere: “Get Down Stay Down” by Julez