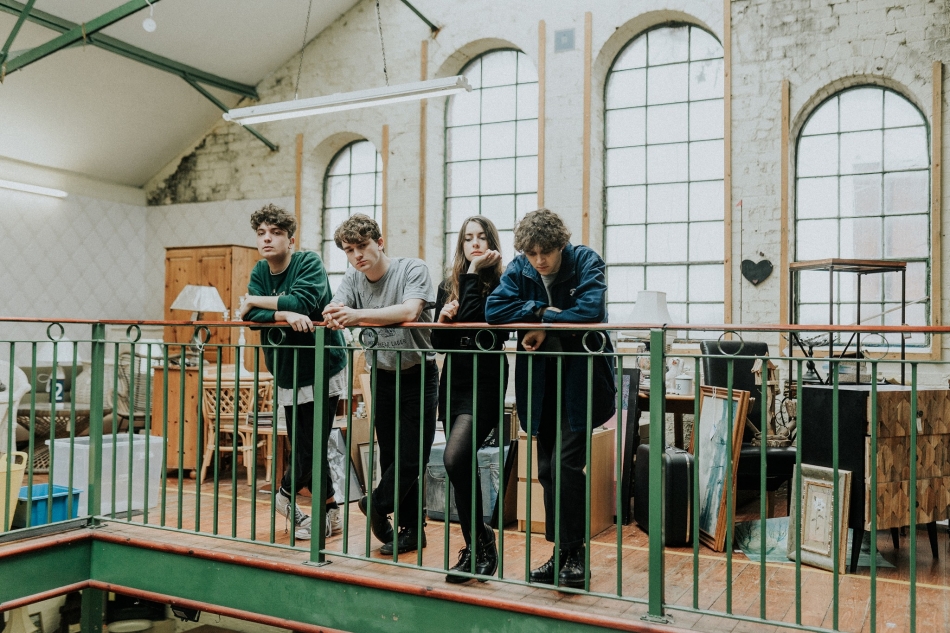 Coming from a bombardment of emotional loss, vocalist and bassist Greg Obis fuels his energy into his latest project, Stuck. After the passing of both of his parents in recent years, Obis garnered the help of his friends and drummer Tim Green, bassist David Algrim and guitarist Donny Walsh to craft post-punk noise and tense, frenetic sound into their debut full length album for Change Is Bad, released today off Obis’ own imprint Born Yesterday Records. Emerging from the Chicago DIY community, the quartet blend themes of life’s inevitable shifts and turns with their pounding and propulsive aural vivacity, simultaneously knowing just when to hone in on their lyrical emphasis. Giving their listeners something to chew on, tracks like “Invisible Walls” put forth the question of alternate realities while their melodious lead single “Bells” provokes neuroses of never quite living up to other people’s standards. Unfortunately we’ll have to stay patient as they reschedule their tour with USA Nails but we understand it’ll be worth the wait. In the meantime, you can purchase Change Is Bad here.

Returning with his sophomore album, Joe Stevens’ Peel Dream Magazine hasn’t lost the existential depth that formed his solo work in 2018. Enlisting the help of vocalist Isabella Mingione and drummer Brian Alvarez, Agitprop Alterna came to fruition by innovative collaboration in the studio and channeling hazy dream-pop and fuzzy yet melodious kraut-rock, reminiscent of My Bloody Valentine and Yo La Tengo. Experimentalism bleeds into the intricate yet minimalist sounds that soak within the layers of sonic synths and lush, lo-fi landscapes, creating a retreat to escape for a while. Inspired by the Bertolt Brecht quote that “art is not a mirror held up to reality, but a hammer with which to shape it”, Stevens proactively melds a stunning collection of of 13 tracks that not only invites his audience but actively encourages them to create meaning and experience out of each listening experience. You can purchase Agitprop Alterna via Slumberland Records today.

London’s post punk act Es leaves no room for respite with their debut full length, Less of Everything. Having toured with the Thurston Moore Group, the four-piece have been captivating their audiences since 2016 and driving their menacing, commanding lyrics with a dynamic force. Vocalist Maria Tedemalm states her motive by “push[ing] the lyrics as far as I can thematically until they become absurd … overly dramatic ... while still being sincere in the feeling they're trying to invoke.” Less of Everything is a sonic anthem to ascribe to minimalism without leaving behind intention. Sharpening meaning to its foundational essence, Es teaches us that sacrificing excess leaves us to consciously digest the significance of what’s right in front of us. You can purchase their record via Upset the Rhythm.

Based in Cardiff, psych-grunge outfit Clwb Fuzz has released their single for "No Heaven" today via Libertino Records. Vocalist and guitarist Emily Kocan draws inspiration from Kim Deal and the Breeders’ 1990 Pod album in the creation of "No Heaven" and its juxtaposition of feminine vocals with raw grit. Along with her bandmates Joe Woodward on vocals and guitar, Gruffyd Roberts on drums and guitarist Hayden Lewis, Clwb Fuzz have concocted a mesmerizing track with reverb-laden instrumentals and vocals rich with swagger. Still in the prime of their initiation, we look forward to what’s next in store for the Wales’ quartet.