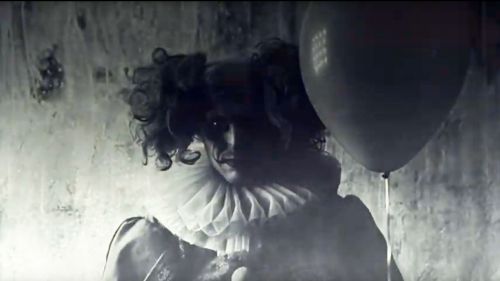 Video still from "Sombre Circus" by The Roadside Bandits Project

Based in West London and formed by music producer Santi Arribas, the rock/alt-pop outfit The Roadside Bandits Project includes various Gang of Four members (the late and lamented Andy Gill was part of the band).

The Roadside Bandits Project will be releasing their debut album later this year via Dharma Records, but ahead of that they are dropping the timely and sober single “Sombre Circus” with an accompanying video.

The contemplative and heartfelt track tackles relevant socio-political issues and was created in collaboration with singer-songwriter Nell Bryden who splits songwriting credit with Arribas.

Rebel Noise is stoked to host the premiere of the lyrics video for “Sombre Circus.” Steve Barney holds down the measured drum beat, while Mark Neary keeps the bass line down low. Arribas adds reverberating guitars, wavering keyboard notes, yearning vocals. He trades lines with, or at times is doubled by, Bryden’s matching regretful tone.

The grayscale-style video showcases an acrobatic contortionist at its start before moving on to pictures that mirror the song’s serious lyrics (images of barbwire, fleeing refugees, and machinegun fire), which touch upon how many well-off nations have refused to accept refugees from war-torn and poorer countries. The look of the video was inspired by the 1920’s urban-themed painting of Edward Hopper.

Arribas goes into the meaning of the song’s lyrics, explaining, “In the song’s opening verse the “fence” refers to Trump’s wall and what’s been happening at the borders of Mexico, Hungary and to a certain extent Brexit – anything that represents the closure of borders, while the “sergeant” represents the political class and the “devil” the oligarchs and big corporations – all in all a pretty “sombre circus!”

Thousands were down at the fence

But the sergeant said

They’re back in town

No more tickets for

The devil is waging his tail

Is always for sale

For limbs and souls

Standing at the gate