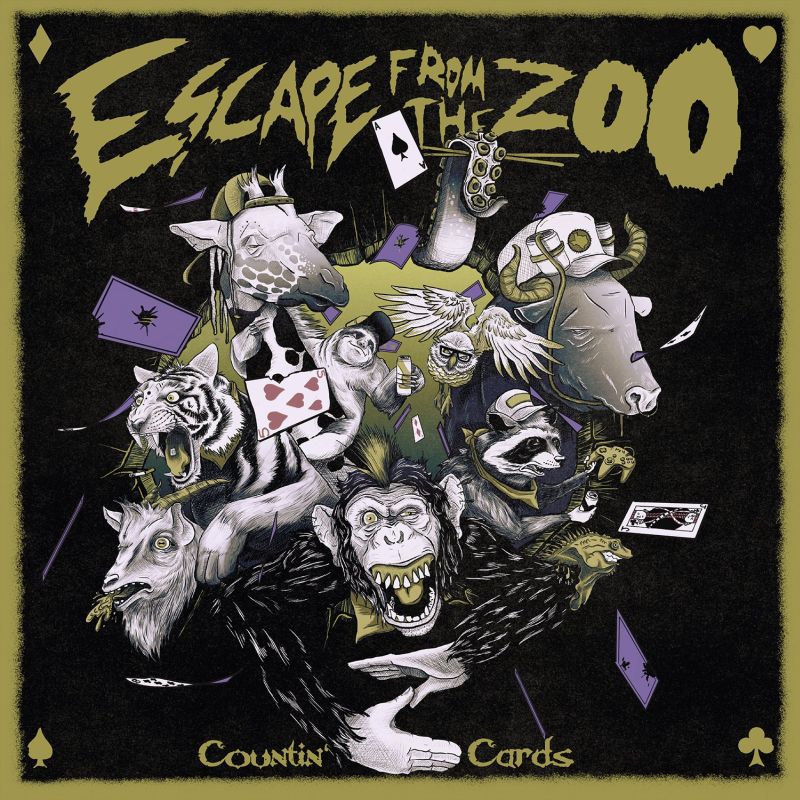 Escape From The Zoo - Countin' Cards

Fat Wreck Chords recently announced the exciting news that acclaimed punk rock project Escape From The Zoo have signed to their label.

The band is made up of Jesse Sendejas of renowned thrashgrass outfit Days N’ Daze, his wife Veronica Sendejas, and Elliot Lozier of We The Heathens.

Their first album for Fat Wreck, Countin’ Cards, will release on February 11th. Ahead of the drop the act have unleashed the rousing single “12 Rounds” and its accompanying music video.

The upcoming full length is informed by the swiftly changing nature of our times; from the overarching effects of the pandemic to Jesse’s new-found sobriety, as well as the twin scourges of police brutality and systemic racism.

Tracks are jam-packed with astute and acerbic lyrics that provoke deep thought, but the self-deprecatingly cocky (Yeah, I know, it’s an oxymoron!) vocal delivery and fast-paced punk rock music leavens the seriousness of the relevant sentiments.

The lyrics of “12 Rounds” illustrate the tug-of-war struggle between growing up and being responsible versus letting your inner random impulses take over. It’s sung and done in a fun, up-beat ska-punk style, with an equally amusing music video that showcases the rambunctious nature of the band.

Jesse offers his heartfelt take on the album as a whole, commenting, “There’s nothing more important to me than when someone shoots us a message and says, “I was having a shitty time and I put this song on and it brightened my whole day.””

“That’s how I want people to feel when they listen to this record. I want it to make them feel less alone, because they’re not the only ones having these weird awful thoughts run through their heads.”

“It can be really easy to feel that you’re the only person on the planet who is depressed or drinking a handle of vodka at 10am, but you’re not.”

“We’re all sharing the same shit, so if this album can make people feel like they’ve got some friends, even when there’s no-one around, that would mean the whole world.”