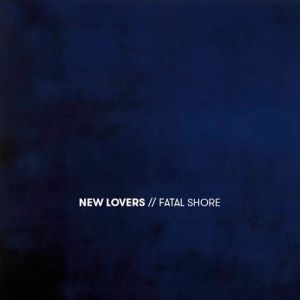 Sydney, Australia post-punk/New Wave pop five-piece New Lovers is making a splash with its first single “Fatal Shore” off of its upcoming debut album Performance, which is set to come out sometime this year after a long gestational period.  Nicholas Elias, Owen Cramp, Kameron Kirkbeck, Munroe Moore, and Thomas Adams craft tracks that sound like throwbacks from the 1980s perspective of both the post-punk, angular guitar and stark vocals style and the upbeat, New Wave, New Order-like pop genre.

The resulting single “Fatal Shore” showcases the best of this dual nature, leaning more heavily on the sharp, post-punk angle of ominous, wiry guitar wrangling and the lead singer glowering with a dispassionate menace as he booms Nick Cave-like through the guitars and drums-driven dirge.   Sounding a warning call, he exclaims with a deeply cavernous, bleak intonation “The great twilight / Many would come / too many to ignore / on this fatal shore.” amid the dissonantly droning guitars and pressingly slapped drum beat.

Many dream-pop and dream-rock bands are making their mark these days in the music world and newbie Safe Places is poised to dominate the dream-rock landscape based on its lone song (so far) “Wild Ride”.  The band is in its early days and not much official information is available yet, except for the fact that Safe Places operates out of Austin, Texas, “Wild Ride” is up at the band’s SoundCloud and BandCamp sites, and the song’s release date is slated for either January 11th or 15th.

“Wild Ride” kicks in immediately with full-on blast of sky-bound, distorted guitar radiation and a non-stop, propulsive drum beat.  A male vocalist begins to exclaim expressively, but his vox is partially immersed in the sonics, so it’s difficult to piece together what he’s singing.  He alternates his lines with another male vocalist who is buried even further in the mix, but who still comes through with an emphatic vocal tone.  From what can be sussed out, the lead singer actually has a sweet message for the one he loves, proclaiming on the chorus “I swear it’s a crime / to call you mine / No one else I’d rather have / to take up my time.” as the guitars swoop over his vocals in great, planing waves.


Hit Bargain – “The Circuits That Cannot Be Cut”

Out of the Los Angeles underground comes newly-formed hardcore/punk band Hit Bargain, led by fierce frontwoman Nora Singh.  She is surrounded by and ably supported by her bandmates Mike Barron (guitar, vocals), Mike Stoltz (bass), and Anton Hochheim (drums).   Their collective previous (or sometimes concurrent) bands include The Pains of Being Pure at Heart, Teenage Waistband, These Are Powers, and North Highlands.  Singh sing-shouts about feminist and LGBT issues as well as other trenchant topics on Hit Bargain’s tunes and the live show experience is what is most important to the band members.

Hit Bargain’s debut single, “The Circuits That Cannot Be Cut”, comments on the power dynamics of guns via terrorist and law enforcement mentalities using a running Die Hard-inspired monologue where Singh channels the attitude of a hardcore frontman.  The song is awash in choppy drum rhythms, sharp guitar lines, and a murky bass line undertow.  Singh sings, speaks, and exclaims over the sonic fray, taking on the first-person persona of the police as well as that of the terrorists in a Die Hard-like scenario.  The fiery lyrics and Singh and her bandmates’ energy and aggression explode by the end of the song, which is probably even more incendiary when performed live.

The Aquadolls, led by Melissa Brooks, has a ‘girl power’ message to deliver and it does so in catchy, pop-punk fashion on “Girl Riot”.  The Southern California garage-rock band released its debut album, Stoked On You, in December 2014 and the band members are currently working on a follow-up EP and album with producer Aaron Greene.

The single “Girl Riot” is a celebration of the strength of women who have had to face injustice and adversity head-on.  Melding the chugging rhythms of old-school garage-rock guitar distortion and drums with brightly upbeat, 90’s-styled sing-alongs, “Girl Riot” is vividly rousing.  Brooks is at the head of this cheerleading pack, bursting into the chanting chorus sections with rah-rah spirit, exclaiming “I’m not gonna stay quiet! / You mess with me / I’m gonna fight it!”  While the direct and infectious rhymes are as sticky and poppy like bubblegum, the best line of the song comes in the form of the mantra “Be the change you want to see.”

New Video From SGV’s Own ‘Repeat Offenders’ - Throw Away Kids