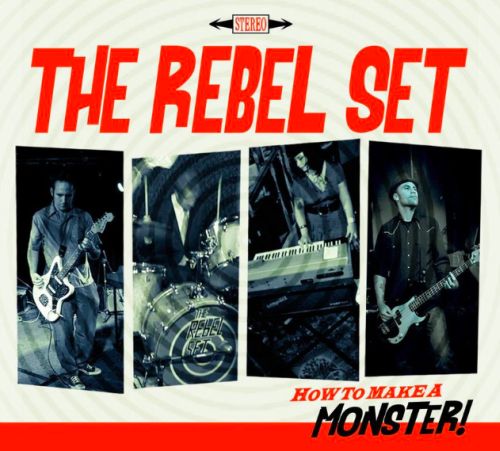 Garage/surf band The Rebel Set rocks, and rolls, on new album “How To Make A Monster!”

Arizona's The Rebel Set release "How To Make A Monster!" LP via Burger Records and their own Silver Hornet imprint

The Rebel Set have a vintage crash and snarl blended into their music that is capable of causing a full blown case of “Rockin’ Pneumonia.” Front man Joe Zimmerman’s sound has warmth reminiscent of guitar heroes from the 1950’s like Link Wray and Gene Vincent at the peak of their thunder inducing years. The songs are pressure packed with the energy of 1960’s garage bands like The Sonics and The Monks.

Much like the way punk bands in the late 1970’s did, The Rebel Set takes the influences of rock n’ roll yesteryears and injects high octane rocket fuel that explodes their songs into the stratosphere. The Clash did it, The Ramones did it and now The Rebel Set have done it once again. The Rebel Set also encompass a darkness and air of mystique that looms in their music. Not darkness in the Biblical sense, but the kind you feel when watching an old film noir.

Influenced by his father’s stacks of rock n’ roll wax (good thing some kids pay attention to their parents’ music) and the lo-fi garage rock craze of the 1990’s, Arizona native, Joe Zimmerman, decided to put together a band that encompasses the sounds and influences he’d been absorbing his entire life. Thus in 2007, The Rebel Set was born. The band has had some lineup changes since their conception, but currently enlists the talents of Joe on vocals and guitars, Jeff Doing on drums, Katey Trowbridge on organ, and Brandon Goehner on bass.

The Rebel Set’s music is a teenage rumble in the late night hours, a drag race that crosses the double yellow lines, a wild ride you don’t want to miss.