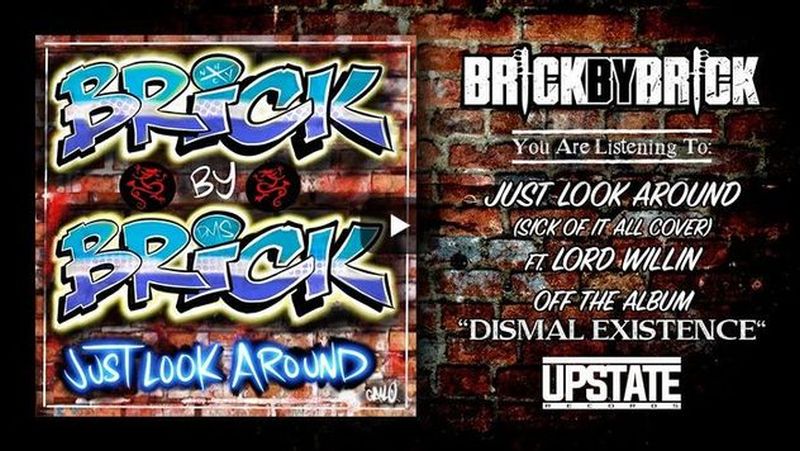 Brick By Brick - "Just Look Around"

The NYC-based band unleash the aggression and socio-politically relevant lyrics of the classic track.

New York-located hardcore act Brick By Brick have released a pummeling cover of the socio-politically *still*-relevant “Just Look Around,” originally recorded and released in 1992 by renowned hardcore band Sick Of It All.

The single’s artwork was done by none other than Agnostic Front’s Mike Gallo, and the track features guest vocals from Lord Willin. The record also has a remix of the number courtesy of Stress The White Boy.

Brick By Brick’s “Just Look Around” is available through Upstate Records and Blood Blast Distribution.

The band will be part of a killer lineup tomorrow (November 20th) at the Upstate Family and Friends showcase at the Brooklyn Monarch in Brooklyn, NYC.

Brick By Brick have going at it since 2004, blending traditional hardcore with metal music. Their latest album, Dismal Existence, will see the light of day on February 18th via Upstate Records and Blood Blast Distribution.

Mike Valente, founding member and guitarist in Brick By Brick reveals some details about the song via Upstate Records:

Tell us about why you picked Sick Of It All's "Just Look Around" for a cover? For the outro, you mix in a little hip hop to round it out.  Tell us who made the beat and more about Lord Willin.

“"Just Look Around" was done because we wrote this album during the pandemic and the message of that song has never waivered over it's 30 years since it's been written.  Sick Of It All is my favorite NYHC band as well!”

“Jeff "Stress" Davis was the producer on this. He made the beat. He is a gold record producer with credits like WuTang, Gym Class Heros, among MANY notable artists. Lord Willin is the perfect mix of hardcore and hip hop. He has a vast knowledge of both genres and reps hard with his lyrics. Willin was chosen because of his dedication to his craft and support of ALL music.”

The cover art for the single was drawn by Mike Gallo (Agnostic Front).  Tell us more about the inspiration behind the cover and why did you pick Mike Gallo for the design.

“We wanted a traditional style that would match NYHC and the theme of the time that it was written as well as to help round out the hip hop addition to the song.  Mike Gallo's artwork has been featured in many NYC art shows and he is a staple in the NYHC community. His style was the perfect touch to round it out.”