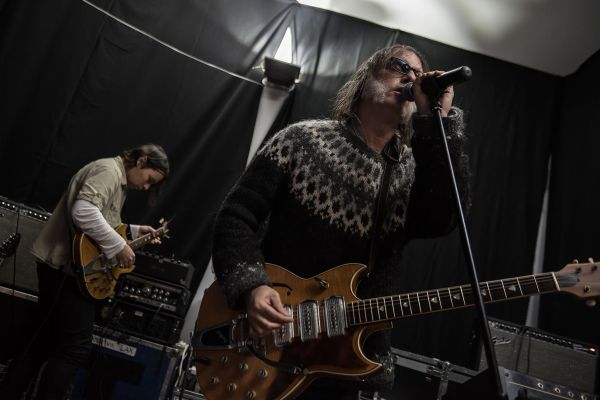 Anton Newcombe, legendary leader of the Brian Jonestown Massacre, pauses for a moment to chat about his current, past, and future musical creations.

Hello Anton!  It’s so rad to have the chance to interview you again after touching base with you recently for Northern Transmissions. Where are you at the moment and how has the New Year been treating you?

I'm in Berlin, Germany... I'm OK and very fortunate to be doing what I love in a place I love.

The last time we chatted, you were preparing to head off to SpaceFest! in Gdansk, Poland to co-chair with Emil Nikolaisen (Serena-Maneesh) the Pure Phase Ensemble 6 musical collective.  What is your overall reaction to the music you created with Emil and the select group of Polish musicians?

It was interesting... It was an honor to be invited, but you know, I really wish the concert turned out better...but that's life...

Did you and Emil mesh well as “co-directors” of the workshop that facilitated the crafting of the compositions or did you have different styles of directing?

In relation to Pure Phase Ensemble 6, you have described yourself as a “jazz folk guy” and not an “entertainer” and that you wanted to contribute something “worth listening to”.  Did all the musicians align with your view – to create something of deeper import and not just an easily forgettable amusement?

It's very hard to get people to see the power in simplicity... but you know...  if you listen to the video of the show, then listen to this tracked song from last week of my actual idea that I wrote in front of those people, you can see where it fell short... Anyway, I'm thankful for the opportunity... I wrote some interesting music with Emil.

So what was the overeall live performance SpaceFest! experience like?  I guess what you produced in the workshop didn’t totally translate to the open stage…

I tried to get everyone to play at the level of the drums... We soundchecked, then they came out and tuned up... I felt like sound problems wrecked it.  The musicians missed the changes because they couldn't hear the drums or each other...

In general, which do you find most rewarding – the process of music creation, the completion of a composition, or the live performance of the final product?

I like to create… but I also like to perform the conceptual ideas I have created.  More refined... For instance, when I record, I just press record and write, and stop when it catches my attention... In the live arena the music lives or dies.

In 2015 you released the collaborative album I Declare Nothing with Toronto-based singer-songwriter Tess Parks.  You’re now restarting the musical union, with new audio up at YouTube.  What are your and Tess’s plans – to deliver a run of singles or a whole album?

Yes, we have been writing a song every day here in Berlin, and I post the works (at YouTube) in progress.

How did you connect with Tess in the first place?

Of all the instruments you’ve played, which has been the most intriguing or unusual to use?  Are there any instruments out there that you have yet to play, but want to try out?

I dunno… I look at the recording studio as an instrument .

You recently released 3 singles from the upcoming 14-track Brian Jonestown Massacre album Don’t Get Lost, which comes out February 24th via Cargo Records, hot on the heels of 2016’s Third World Pyramid.  Can you give an overview of the sonics/atmosphere/topics of the forthcoming album?

Well, I wrote Third World Pyramid and Don't Get Lost at the same time... Two totally different albums... Different styles... I just want people to listen to both and think about that... ponder it.

I really enjoyed the film.