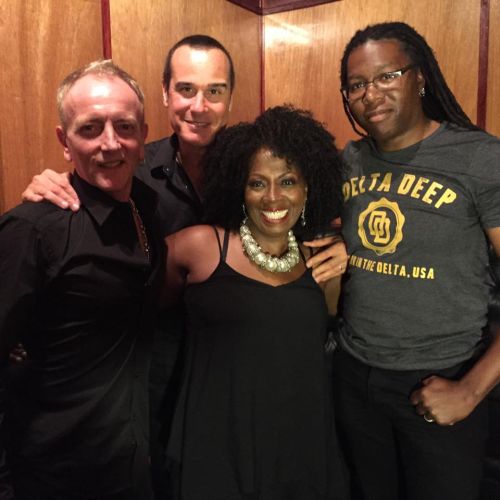 The electrifying Debbi Blackwell-Cook of the blues-rock band (formed by Phil Collen of Def Leppard) reveals insightful details about Delta Deep and her life.

Hello Debbi!  It’s such a thrill to have the chance to catch up with you about your involvement in the blues-rock project Delta Deep, which was founded by Def Leppard-member Phil Collen.  It’s a super-exciting, and probably hectic, time for you with the self-titled debut album just having been released on June 23rd and the recent live performance at The Hotel Café in L.A.    Was that your inaugural gig as Delta Deep?  What was the experience like?

Hello. Yes this was Delta Deep’s inaugural stage performance.  As you stated, it is super-exciting.  I felt right at home.

From what I understand, Phil started Delta Deep in 2012.  What is your connection to Phil and when did you sign on to the band as the lead singer?

Actually, Phil married my God-daughter Helen, which makes me Phil’s God- Mother-in-Law.  The nucleus of Delta Deep started with me and Phil singing around the kitchen table. We then did a benefit performance for the Gerson Institute where Phil donated one of his guitars and raised $20,000.  We also performed on San Diego’s U-T TV and sang for the Grammy Foundation. We even performed a small set at a local family restaurant for our friends just to feel out the reception of different audiences. Where we performed varied, but the demand remained the same and that was “Where can we buy your music?” which propelled Phil, Helen, and me to start writing.  Now there had to be a name, and it was around that same table that Helen said, “I got the name of the group!” and then and there Delta Deep was born.

Robert DeLeo, who was in Stone Temple Pilots, is on bass and Forrest Robinson, who has previously worked with other artists including TLC and India Arie, is on drums and percussion.  What is it like working with them?

Working with and adding Robert and Forrest to our jamming Rock and Soul wasn’t work. It was and is a melodic pleasure; an absolute magical pleasure.  We are the perfect team.

On the Delta Deep album, you not only sing solo and with Phil, but you also duet with guest artists Joe Elliot (Phil’s Dep Leppard bandmate) and David Coverdale of Whitesnake.  What were those collaborations like?  Were you actually in the studio with Joe and David when laying down the vocals?

No, Joe Elliot and David Coverdale were not in the studio; however, I had the esteemed pleasure to pal around with Joe and Phil after a Def Leppard show while they were in Las Vegas during their residency at The Joint in 2013. Joe and I had a ball singing old Motown songs with Phil on acoustic.  It’s always a thrill singing with these two fabulous men.

You co-wrote several of the songs on the Delta Deep album with Phil and his wife Helen.  What was that process like?  Did you draw from your own life when penning the lyrics?

With the exception of three cover songs on the album (“Private Number” written by Judy Clay and William Bell, “Black Coffee” written by Tina Turner, and “Mistreated” written by David Coverdale), Phil, Helen, and I are the songwriters for Delta Deep.  Writing with Phil and Helen is a great JOY. Each and every song is a beautiful family reunion.  Most times we’re together it’s good times, laughter, and constant creating.  It can be hectic, but well worth it.  Yes, we draw from our souls.

Did you have input into the sonic compositions of the songs?  Did the recording of the album flow easily or was there a lot of hashing out to do before the product was finalized?

Yes, I had input regarding the composition of the songs.  There was never a bump in the road. Phil and I work hard, but we work together.

As a unit, and individually, you’re trying to keep the traditional blues alive, which I think you accomplish splendidly on the Delta Deep album.  You also revitalize the genre by incorporating a rock style element to many songs.  Which song off the album means the most to you?

Thank you for the compliment.  I don’t know that I have ‘a’ favorite but “Whiskey” is close to my heart.  Inside the words is the story of my son D’Roderick’s murder.  I had to think long and hard to answer this question without getting blue.  No pun intended!  You asked about keeping tradition alive: The Harriet Tubmans before us would cry a river. They paved a way for not only a better day, but also a better life.  Seeing the shortcuts being taken today is a smack in their face.  They risked their lives so that many others would not lose theirs.  Somewhere we’ve made a wrong turn and stayed on the wrong road.  “Whiskey” is the story of killing one another - the story of pain being traded for a bullet. “Whiskey drank whiskey…” - This is a sad song.

I already put this in my review of your album, but I’ll say it again here; you are integral to the sound and attitude of Delta Deep; it’s soul, so to speak.  You vocals and emotions are like fireworks – powerful, vivid, and illuminating.  When did you start singing and when did you realize that you had what it takes to make it in the entertainment field?

For me, it was not about entertainment. All I ever wanted to do was sing.  I was born to sing.  Music is my safe haven and my gift from God.  Entertainment chose me! (smiles)  The music afforded me to nurture.  I got bit by the song bug as a child watching my grandma Jenny singing in church. I then followed in her footsteps.  People being entertained by the gift of song God has adorned me with is a gift in itself to me… The cherry on top of the cake.

From what I’ve read, you’ve had a long and illustrious career as a theater performer.  Were you acting in plays or singing in musicals or was it a mix of the two?  What are some of the highlights from your time on the stage?

Yes, theatre is one of the many careers. I’ve been both on and off Broadway.  I’ve had the privilege and honor to do a one-woman show, ‘The Life of Bessie Smith’.   Some of my stage highlights’ include being recognized as an award-winning actress (I won ‘Best Female’ in a musical category). I’ve done TV as well as short movies. I’ve had the privilege to share the stage with such greats as Thuli Dumakuta of the Lion King and the late Theresa Merritt. I was nominated for an award in the same category as the late Ruby Dee. I appeared on ‘A Different World’ with Patti LaBelle. It was also on that same show that Dianne Carroll held my face in her hand and told me I was beautiful and funny. I always thought that about her and then here she was saying it to me. I have had some wonderful emotional and empowering highlights.

Yes. I’ve done backup and leads and had fun being on call.  I had a rep for being a fast worker and, since time is money, it worked on my behalf. I’d most times do lead and backing vocals as well as arrangements. I’ve worked all over Germany singing gospel and had the privilege of singing at the Vatican for Pope John Paul II. I have worked with Will Downing, Kernel Abrams, Gregory Hines, and so many other wonderful entertainers.

What other projects were you working on as a singer before you joined Delta Deep?

Before Delta Deep I was a lead singer as well as a solo artist. I was the lead female singer On Salsoul Records for the group The Jammers in the 1980’s.  For the past 15 years I’ve partnered with DJ Cambis in Germany writing, singing, and arranging house music as well as writing, singing, and arranging with German producer Florian Grummbs, singing soft, sweet, meditative music where I am still a solo artist known as Madeevah.

Is there anything special you do to keep your voice in such great shape?  I know some singers perform exercises or drink specific mixes to preserve their vocal vitality and I was wondering if you had a ritual that works for you.

To keep my voice there are times when I shut it down.  Vocal rest!  Stay hydrated drinking water, rest, and sleep.  I also hum to massage my vocal chords. I studied with the late Great Professor Edward Boatner who had his students gargle with apple cider vinegar and baking soda… Lots of prayer helps too!

What is on the horizon for the band?  Do you have other shows lined up?  Will you be shooting a video for a song off the album?

I’m humbly waiting myself to see what’s next. I pray blessings for Delta Deep and hope our music touches the world.

OK, I just have to ask this because I’m curious: Your name comes up at IMDB.com and the site lists you as a hairstylist on the movie ‘Hangin’ with the Homeboys’.  Is that you or is it someone else who has your same name?

Thanks so much Debbi for taking the time and interest in answering my questions!  You are an amazing talent and I was blown away by your singing on the Delta Deep album.  Wishing you all the best!

Thank you for your well wishes. I pray to never disappoint you.  God Bless!