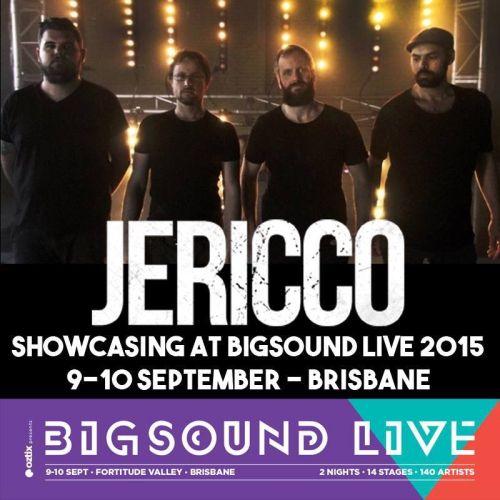 Hiya Aiden!  It’s so good to have the chance to touch base with you and see how it’s going with the recent release of Machine Made The Animal, your band’s 2nd full-length.  What has reception to your electrifying alt-rock album been like?

Our pleasure; thanks for having us! To be honest, the reception has blown away our expectations of what reaction we would have liked to receive and it has really shown at our shows. One of the bigger worries of putting a brand new album together for touring is writing a set list that the new and the old fans will love and it’s extremely awesome to see the old fans and the new screaming the lyrics back at us…

Before we get into it, can you please list who’s in the band and what instruments you play?

My name is Aiden King and I play drums.  We also have Brent McCormick on vocals, Roy Amar on bass and oud and Anthony Connaly on guitar and sitar.

You’ve released 2 EPs, an early-on live album, and your debut album Beautiful In Danger in 2013.  How would you describe the evolution from those records to your new one in terms of lyrics, song composition, and musical style?

We have definitely matured as songwriters on the latest record, but also adapted into the new material what got the best reactions from our previous releases. We feel super-capable with the current line-up and that always helps.

The songs off Machine Made The Animal are powerful, melodic, and dynamic instrumentally and vocally, and meant to be cranked to the max.  I’m intrigued by your compelling blend of forceful, forthright alt-rock with thickly textured synths, captivating vocal harmonies, and whirlwind, dance-like grooves.  How did you hit upon this stylistic mix?  What is the inspiration behind the propulsive rhythmic tempos that drive your songs?

We go into the song-writing process with a clean canvas and zero rules; each one of us come to the table with an idea… It gets played and listened to and that’s the Jericco sound that you listen to on the current songs.

Who are some your musical influences?  Even though you have your own distinctive sound, I can’t help but hear little bits of Rage Against The Machine and System Of A Down (for the sonic aggression), and for some reason Public Image Ltd (for the attitude on some of the vocal phrasing), on album-opener “Colour Outside The Lines”.

We could write you a novel on what other bands influence us individually, but most people would be surprised to hear that our influences don’t always derive from the heavy or ballsy tracks you may think. I, as the drummer, listen to fairly ambient groove-based stuff like Bonobo, Hiatus Kayote, and Karnivool whilst Roy has and will always have his love for rock bands from the 90’s and now.  Brent’s car stereo could be spinning anything from Biffy Clyro to some mix-tape he purchased of some street hip-hop kid in a New York Subway and then Anthony is into super-brutal black/ speed/thrash/leather metal.

Who provides the anthemic backing vocals on songs like “Looking Back” and chanting gang vocals on tracks like “Between You And Me”?

That’s all of us as a band in the booth together, plus a couple friends and family members who decided to come and check out the studio and ended up in front of a microphone.

“Blue”, which falls midway through the album, is a more contemplative number, and album-ender “The Fix” features a break of Middle Eastern music-influenced percussion.  Was it a challenge for you to create these different styles versus your usual alt-rock structures?

We love to structure an album like a set list… Come out strong, smash it… take a breath… smash it and leave an epic impression!  “Blue” is the breath of fresh air…

Can you drop some details about the meaning behind the album title and songs like “Animal”, “Machine”, “Between You And Me”. Do you consider Machine Made The Animal to be a concept album?

Machine Made the Animal was a concept that interested Brent and when he told us about this concept, it glued all the songs together but also allowed the titles to be separated.  The album title has multiple stories behind it, but basically it’s about creating your own path; not the one that has been placed before you.

Our buddy Dan Murtagh at Sing Sing Studios was the only guy we wanted and the guy we got as we have worked with him on the previous album. We could not have asked for more from Dan in the studio and we are forever grateful for his ability and his time given to us on Machine Made the Animal.

You’re based in Melbourne and there seems to be a lot of musical activity going on there, as well as in Sydney and Brisbane.  Did you all grow up in or around this city or did you converge there for the express purpose of creating music in this artistically-receptive environment?

Well, Roy, who started the band, grew up in Israel and his influence from that created the unique sound that is Jericco.  But, yes, all the other band members were and are based in Melbourne and we come together from networking with other bands and being active and not sitting on the couch.

You played a string of gigs in May in support of your new album.  What was the experience like and do you have more shows lined up in the near future?  What’s next on your plate?

The experience is describes as “what we deserved” and I say that in the best way possible. We feel honoured with the numbers of people that come to see us play live, purchase merchandise, and stay around to have a chat about the bands with us after shows. We put a massive amount of effort and investment into that tour and it all worked out to plan. At the moment we are booking another follow up single tour that will be a bit more stripped back and hopefully get some cash together to head overseas to a number of countries who have made enough noise to get us over!  We will also be playing the showcase at Bigsound Live 2015 in Brisbane in early September.

OK, I just had a good laugh when looking at the ‘About’ section at your Facebook profile.  What’s this about your ‘Personal Interests’ being, ummm, ‘Milk and Unicorns’?  Now, I know milk does a body good, but…unicorns?

Unicorns are good for the mind and soul… Milk is just a tasty drink!

Lastly, can you please list your official sites where we can find out more about you and your music?