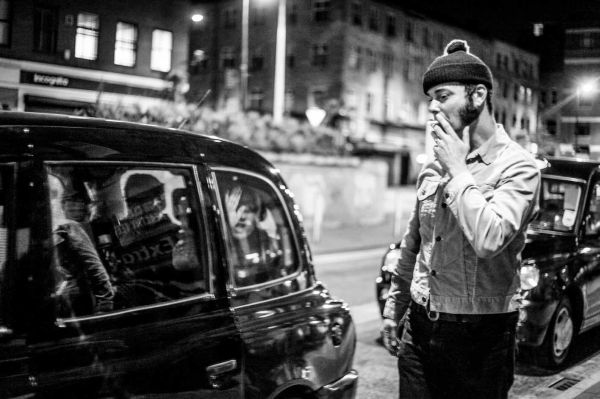 Hello, Joel!  What a special pleasure it is to touch base with you after premiering your lyrically-relevant and sonically resonant ‘New Year’ single “Tomorrow” at The Big Takeover.  It’s not only a summation of your outlook over the course of the past year, but a socio-politico-economic statement; a manifesto, if you will allow that, on how to overcome the stupidity and blatant hatred that has bared its teeth on the US Presidential campaign trail and is now chewing up the media scenery on its way to the White House… But before we attack that beast, how are you doing, man?  Is 2017 off to a good start for you?

Yes it is – Brian Jonestown Massacre is going to Mexico for the first time this March, I've got this album just about tied up, and I'm somehow barely making it by without a regular J.O.B., so all is right in my universe.

You’re probably prepping for the release of your sophomore album now.  Can you spill some details about it – like when it will arrive, its title, its lyrical and sonic content; you know, the whole nine yards!

The album is to be self-titled and will be out this summer. When I was writing the songs, I kept returning to themes of personal identity Vs. roles in society, which inevitably brought me to inequality in the world and the big non-reality game we are all being subjected to. I started out worried I was being too political, but turns out it wasn't enough!

What are the differences, and links, between this upcoming album and your debut solo album, Apple Bonkers?

Apple Bonkers was me sort of staking my claim as a songwriter and entering the ring of a genre I've been so deeply involved with otherwise for many years now. So the new one is me currently stretching out further and pulling in other styles of music I'm really into like Tropicalia, Soul, and '60s soundtrack music, which are then incorporated back into my psych framework. It's different and I'm really into it ‘cause it's showing my individuality. I hope people like it, but even if they don't, I'll just laugh ‘cause I know it's great.

How did you find the time to record this new album when you’ve been on the Brian Jonestown Massacre world tour for most of 2016?!

I'm not sure I did - haha! There was a lot of BJM touring this year - which was great, great fun. But yeah, I had a lot done before we left and I've been plugging the holes in between tour legs with writing and recording.

Who else was involved in the creation of the album?  Any input from other BJM members or did you say “Hands off!”?

Collin Hegna from BJM. I was definitely saying “hands on” to. He has a studio up in Portland where we recorded most of the record, as well as the single "Tomorrow". He was my main collaborator this time around. Also Rob Campanella, Dan Allaire ,and Ryan Van Kriedt from BJM are all over it. Those are my boys.

From the start of your tenure in BMJ, had you been secretly composing material that you wanted to put out on your own?  Or did the inspiration strike suddenly, and at a later date, for you to go solo?

Well, that it took so long is ultimately all on me, but trying to mess around with songwriting next to a guy so advanced and prolific as Anton Newcombe was tough when I was first trying, and I gave up early on. At the time, he seemed to just pull his tunes out of the air, so when I sat down with a guitar, if I didn't have something great in the first 5 minutes, I just figured I didn't have "it". Then later on I realized it can take time to formulate a good idea. Finding out Leonard Cohen took several years to write some of his songs was a huge emancipator. But nowadays I do get the occasional immediately-formed song. It's by staying creative and flexing the muscle.

I’m not sure where you are located these days (in the US with a divisive demagogue as the incoming president; in another country with a leader who is respected and respectful of others?), but your lyrics on Tomorrow” are so incisive and insightful on the current climate in the US.  “Tomorrow” is a keep-on-fightin’ (“The harder the grind, the brighter we shine / So go ahead and bring it on”), rise-above (“Don't want an "in" where anybody's left out / What is that all about?”), and celebration of life (“Nothing is here to stay / So I'm gonna get down every single day.”) rolled into one song.  In 2017 what are you planning to do to stay sane in this ever-maddening world?

I'm the last BJM member still living in San Francisco, so the question I'm wrestling with today is whether to protest the presidential inauguration in my town with the baby strollers or over in Oakland where shit will get real. This year will be the return of being treated like an asshole abroad for being American and “letting this happen”. “What do you think of George Bush?” was the opening question for some pub owners in Europe to determine if we'd be getting served or not. “Hey I'm not American - I'm San Franciscian!” doesn't always solve it.

Like a lot of people, I have this weird black cloud following me around right now. But I also am old enough now to realize that the person elected or rigged doesn't make any decisions anyway. President Obama had it going on when he got in there and then his hair turned white in about 2 weeks.

Really, everything that can be said on our sad state of current affairs was already said nearly 50 years ago with songs like Dylan's “It's All Right Ma” and films like Network. They were already talking about the corporate takeover we are experiencing so much more today. What’s odd to me now is that things are even so much more dire, but not a lot of people are putting it out there in song, but I'm gonna do my thing my best way and groove with that.

I'm writing a book compiled of short stories on some of the crazy stuff that's happened in my life so far. Not a ‘tell-all’ or any other kind of bean-spiller, but telling some untold stories about a lot of the crazy stuff that happened before, during, and after the documentary Dig! that nobody knows about.  A view of my experiences in a personal style and narrative that will hopefully be entertaining and different for people. BJM are is gonna do a bit of running around this year, and hopefully I'll still have time to tour some for my own album.

Speaking of travels and live performances, what were some of the highlight (and/or low or crazy-lights) of this past year touring as part of BJM?

Playing for 4 hours in Buenos Aires for a crowd that went equally berserk for every single song till the end. It was our first time over and they just went nuts. Great time, great people.

What’s knocking your socks off these days, in a good way?

IPA, beer man! Seems like there's a new one every day and they get you messed up quick! I'm going to Portland at the end of the month to finish off the record and every liquor store in that town has 100 different kinds – It's crazy - Hopefully I'll still get the work done.