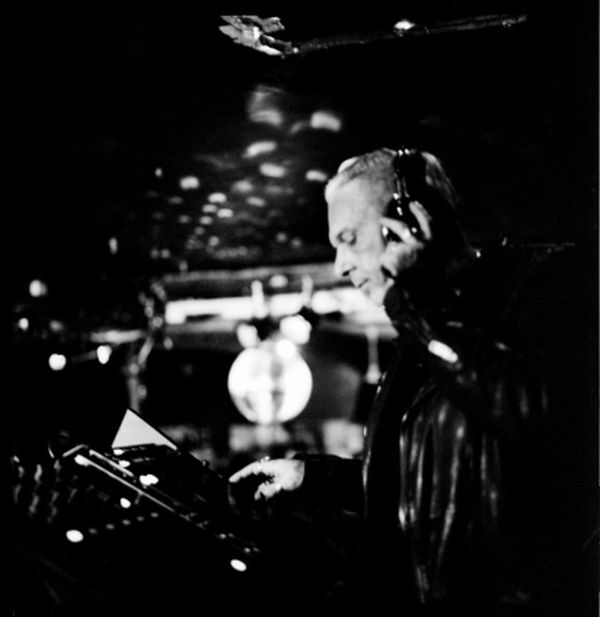 Hello John!  It’s so good to connect with you about your long and illustrious music career that started in the late 1970s with you producing numerous famed bands on, and off, the 4AD label, and then you, along with founder Ivo Watts-Russell, forming the core of the legendary music project This Mortal Coil.  Before we take a stroll down memory lane, I want to point out that you are currently very much in the game with your recent music project Black Needle Noise.  Where are you at the moment and what are the vibes like?

You formed the collaborative project Black Needle Noise only last year and released debut album Before The Tears Came this past June.  What was the spark that ignited your passion for this project?

The spark was after Silver Ghost Shimmer had been laid to rest, I wanted to keep making music and have an outlet for the songs I had laying around, but I didn’t want the confines of a traditional band. Black Needle Noise allows me to do whatever I want, whenever I want.

Just as with This Mortal Coil, for Before The Tears Came you have gathered a supremely talented roster of female, and male, artists who lend their beguiling to striking voices to Black Needle Noise.  In general, do you reach out to artists who you already know or do you try to contact creatives you have no prior connection with – or maybe both?

It’s both; some I know and are friends with, some I have worked before, and some are new singers I have become friends with. One big happy family.

How did you get the renowned Jarboe (Swans) to come on board?

I worked with Jarboe many moons ago and thought I would ask her if she would be up for singing on something for me.  The worst she could have said was no, but luckily she said yes and sang two amazing songs for me and has made me very proud and humble.

Mimi Page of Delerium (vocalist and co-writer of Delerium’s latest album, Mythologie) contributed to your most recent single, the slow-burning, trance-inducing “Swimming In Dreams”.  How did you meet up with her?

I just happened to be in LA last September sorting out some things when Mr. Bill Leeb contacted me and said he was coming to town to have a listening party for the Delirium album, and it was his birthday, and would I like to meet up. So of course I said yes. Mimi was at the album launch listening party.  We got to talking and one thing led to another and here we are with the awesome song “Swimming Through Dreams”.

From what I understand, you’re currently based in Los Angeles.  When you work with the various artists on your music, do you do so in the studio or are you able to communicate and create via the Internet?

So far everything has been done over the internet and I personally hope it continues this way. I like working this way; it’s more exciting for me not to be involved with recording the vocals. This way the singers have total freedom to do whatever they want and I know they are all awesome singers, so what they send me will always be amazing.

You’ve stated that Black Needle Noise is a project that takes the listener to a whole new level of shinier, richer, and darker noise-pop.  Do you feel that you have more freedom with your compositions than on your other musical endeavors?

Yes, Black Needle Noise has no boundaries, so it can go anywhere and sound like whatever it wants to. It doesn’t have to conform to anything or anyone, as long as the singers and I are happy with the songs. It’s always very nice and humbling to hear from music fans that they also enjoy listening to the songs too.

Can you walk through your general creative process to give a sense of what elements (instruments, effects, techniques, experimentation) you use to shape the sonics of a song?

This is a bit hard to describe, as each song seems to have its own life. It all starts from a sound; the sound can inspire one direction for the song, but sometimes I am working on a song and find a new sound and it sends the song off totally in a new direction. Sound has a big part to the writing for me.

While you are the soundscape sculptor, do you also provide the lyrics and/or vocal melodies for your guest artists, or do they bring those aspects to the material?

Normally I leave it totally up to the singers, only on one song have I sent a melody and words for, that was for the chorus on “Naughty Girl”, but I said only use it if you like it. I think that song turned out very well.

Delving into your other ventures, you have produced some of the biggest names in the alternative music business, from Depeche Mode to the Cocteau Twins, Clan of Xymox to Love and Rockets, Nine Inch Nails (Pretty Hate Machine) to Wire… I mean, the list is tremendous and tremendously long!  Can you divulge one special memory from your time as a producer, whether from your time alone in the studio, or interacting with a certain act/artist?

I think one of the funniest moments came when, Steve Gottlieb (TVT owner) came into the studio to listen to the finished NiN album Pretty Hate Machine. After he had heard it, his mouth dropped open in disbelief and said, “You have ruined this record.”  Trent and I looked at each other and went, “Job well done then, Ha Ha.” It went on to be one of TVT’s best-sellers.

In general what is the balance of input between you as a producer and the act/artist’s involvement in crafting an album?  I’m sure it differs depending on who you’re dealing with, but on the whole, how does the process break down?

It differs greatly from band to band and is very hard to break down. I always try to make the best album possible for the band to keep their own identity and sound. I think I have done a very good job of that over the years.

You produced the compilation album Ciao! Best of Lush by my most favorite band, Lush.  Were you in contact with the band members for this comp?  Going full circle, you actually produced “Thoughtforms” and “Etheriel” from Lush’s Scar EP way back in 1989!  What did you take away from your time spent with the band?

I only worked on the first EP with Lush.  Ivo Watts-Russell put the band in the studio with me and said, “If the recordings go well, I will sign the band.”  I guess he liked what I did as he signed the band and the rest is history.

You’ve been associated with renowned record labels like 4AD, Mute, Rough Trade, and Beggar’s Banquet via the artists you’ve produced.  In your role as producer, did you experience/observe a lot of friction between label management and the artists on their rosters?  Were you caught in the middle of any melodrama related to this business side?

There has always been friction between labels and bands, but with 4AD, as I worked with nearly all the bands signed to the label in the ‘80s and worked with Ivo on This Mortal Coil, I used to hear it from both sides. The band would bitch about Ivo and the label and Ivo would bitch about the bands.  You just had to smile and agree with them both and not get too involved.

From what I’ve read, your explorations with the members of Cocteau Twins of their early sound were pivotal in shaping their later ethereal and ambient ambience.  Do you feel you were instrumental in shifting their soundscapes from the harsh starkness of Garlands to the more flowing and dreamy aspects of Head over Heels and beyond?

I think I had a lot to do with the whole sound of the label 4AD, as I think I worked with most bands Ivo signed back in the ‘80s. You can still hear elements of what I was doing back then in Black Needle Noise today.  It’s just part of my DNA, sound-wise.

You worked with Ivo on the collaborative project This Mortal Coil.  What was one of the best facets of working with him?  What track did you most enjoy working on?

Doing all of This Mortal Coil was a joy.  There was a kind of freedom with that project. Black Needle Noise has even more freedom, as 99% of the music I’m making now is original; just the odd cover every now and again when the mood and song takes me.

Watts-Russell folded This Mortal Coil, but branched out as The Hope Blister with you on board, I think.  What was the extent of your involvement with this project?

With the Hope Blister I was just brought in for the mixing, as Ivo wanted to capture the vibe and sound we had on This Mortal Coil and I think I managed to do that, sound-wise.

Moving out of the filigree and shadows of the past, what is your focus for the future?  Are you currently crafting a new Black Needle Noise album?  If so, can you drop some details about it?

Like the first album Before The Tears Came, which was made up of all the singles and an extra track for the album, the second one will be the same. The second album is almost complete and I’m thinking it will be called Lost In Reflections…

Are you planning on releasing any more videos soon?  Speaking of videos, I see that Mark Francombe, a past member of Cranes, provided animation for the video for your song “Heaven” featuring Jennie Vee (Hole).  Do you have any link with Cranes at all?  Vocalist Alison Shaw would be perfect as a contributor to Black Needle Noise.

I’m always looking to make more videos and hope there will be some more soon, but I didn’t have anything to do with the “Heaven” video.  Jennie Vee made the video for her song. I would love for Alison Shaw to sing a song for Black Needle Noise. Thank you for suggesting it. Maybe she will read this and be in touch??

I’m not sure how long you’ve been residing in LA versus living in England, but I was wondering if you’ve experienced any fallout from the shockingly bad outcome of the US Presidential election.  Have any artistic, or other, restrictions been placed on you in any way?  I hope not!

Personally, I haven't had any bad experiences yet and I hope it will continue this way.